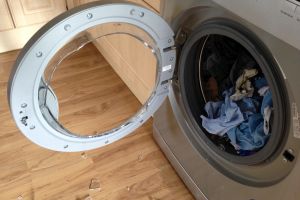 Which? research has uncovered hundreds of cases of washing machine glass doors exploding – and two in five are Beko machines.

We first reported on exploding washing machine glass doors in 2012, and since then the flow of incidents has continued.

Combining a variety of sources, we’ve now unearthed 280 reports of washing machine, washer-dryer or tumble dryer glass doors cracking or shattering. The oldest dates back to 2010, but there are plenty of recent reports.

115 (41%) of the 280 reports we uncovered are about Beko machines, far more than the next brand (Hotpoint, 10%). The figure is much higher than Beko’s market share, which we estimate to be 10% to 20%. If glass doors shattering affected all brands equally, you wouldn’t expect to see this many complaints about Beko machines.

When we asked Beko why, proportionally, more of its machines were exploding, it failed to directly address our question. It did say that this problem comes up occasionally across all products and all brands, and added: ‘The issue is extremely rare – out of more than three million washing machines sold by Beko since 2010, there have been 115 reported incidents, less than 0.003%.’

Those 115 incidents are the ones we flagged with Beko. While we’re pleased that our research apparently managed to uncover every single Beko that exploded, we are disappointed that Beko hasn’t been able to shed light on why its brand crops up so often.

Why washing machine doors can fail

While the 280 reports may be tiny compared with the tens of millions of washing machines in UK homes, the potential danger posed by a shattering glass door is huge. And for those whose machines have exploded, it can be a traumatic experience.

There’s no single clear and obvious reason why these glass doors are shattering. We’ve talked to several experienced repairers who suggested several possible factors. These ranged from people not using their machines correctly, to increases in the size of washing machine doors, to machines being made with lower-quality components.

How to reduce the odds of a glass door shattering

Thankfully, the odds of your machine’s door shattering are slim, but there are simple steps you can take to make it even less likely:

One possible solution that several repairers suggested was for manufacturers to add a plastic layer to the door, to keep glass in the machine if it explodes. Bosch, LG, Miele, Samsung and Siemens have introduced this on some newer models and we believe that other brands should consider doing the same.

We’ve passed on our research to trading standards. It has been speaking to Beko about this issue, but hasn’t taken any action. We think both Beko and trading standards need to take this problem more seriously.