Are nuisance calls driving you nuts? Our latest tests uncovered some brilliant call-blocking cordless phones, as well as ones to avoid.

We’ve all rushed to pick up the phone, only to hear an automated robot voice ask about a ‘recent car accident’ or ‘problem with your PC’. Unwanted calls are incredibly frustrating, and they can be a real nuisance. This is why cordless phones with call-blocking technology are increasingly in demand.

As well as our tool to report unwanted phone calls and our ongoing campaign to call time on nuisance calls and texts, we regularly test the capabilities of call-blocking cordless phones. This month we tested 25 phones from the likes of BT, Panasonic, Gigaset, Philips and Binatone. Of these, 19 are claimed to include the very latest in call-blocking technology.

The phones ranged in price from an affordable £19 to an eye-watering £93 for a single handset. Although both BT and Panasonic had high-scoring handsets, sadly they had disappointing ones, too. And Binatone models performed badly across the board. That’s why we think it’s important to uncover not just the call-blocking cordless phones you should buy, but also those to avoid. 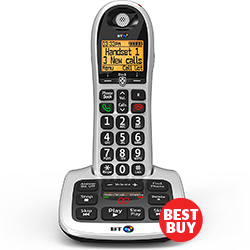 There’s a lot to love about this easy-to-use big-buttoned cordless phone, especially in terms of stopping nuisance calls. The BT 4600 utilises TrueCall call-blocking software and has an in-built virtual assistant that screens incoming calls. You can input up to 200 saved contacts and add a whopping 1,000 separate numbers to your blocked list. For all other calls, the assistant will request the caller to say their name. Then you can choose whether you want to accept or terminate the call without speaking to the caller. If you’re unsure whether to block the call, you can send it to answerphone and add it to your barred calls list later. 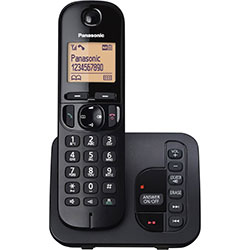 The KX-TGC220EB isn’t a new cordless phone, but Panasonic has recently relaunched this popular low-cost model with call-blocking software. Costing £29 for a single handset, this phone can automatically bar callers with no number, as well as 30 individual numbers. It also allows you to set strings of numbers that can be blocked automatically, for example calls beginning with a particular suffix such as 0843 or 0333. The internal phonebook saves 50 contacts, so you can be sure that those numbers always get through.

Read the full review of the Panasonic KX-TGC220EB. 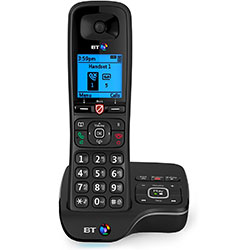 Narrowly missing out on being a Best Buy, this BT phone is a brilliant call-blocking device. It’s affordable, too. Priced at just £29, it has a bright red one-touch call-blocking button. Simply press the button if you don’t want to take the call – it transfers the caller straight to the answer machine. If you’ve already answered, pressing the button will add the number to the blocked number list and immediately end the call. You can block up to 100 individual numbers, and stop calls from international, withheld, payphone and unavailable numbers. 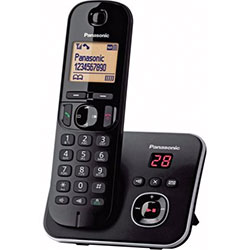 This Panasonic phone has a purse-friendly price of £28 for one handset, and a large internal phone book of 120 numbers. It can restrict all calls where the number is unavailable, and will additionally block up to 50 different numbers. As with the KX-TGC220EB, you can choose to block strings of numbers starting with a particular two to eight digits. You can block up to six different types of numbers this way, including calls from international numbers or mobile phones. Blocked callers are still able to leave an answerphone message. So if a number has been barred by mistake and the matter is urgent, a message can still get through to you.

Read the full review of the Panasonic KX-TG6801EB. 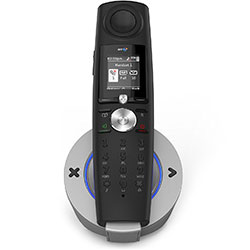 The BT Halo is certainly a pricey and distinctive-looking phone. But if you’ve got the money to spend – £80, to be precise – it’s one of the best we’ve found for call blocking. With TrueCall technology built in, there are extensive options for keeping troublesome callers at bay. You can choose to block up to 1,000 specific numbers, as well as barring calls according to type. Categories include calls from payphones, mobiles, withheld numbers and international calls. If someone calls who isn’t on your allowed list but their number isn’t blocked, they have to say their name before getting to speak to you. This gives you control over who you talk to.

Read the full review of the BT Halo. 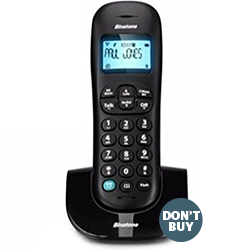 We were disappointed with the call-blocking performance of Binatone’s Vesta 1305. The Vesta 1315 didn’t fare as badly, but it’s still only five percentage points away from being a Don’t Buy. Both cost less than £25 and can save 100 allowed contacts and 100 prohibited numbers. As with other call-blocking cordless phones, you can block by category – this includes withheld numbers, international, unavailable and payphone numbers. But both phones are frustrating to use. They have difficult menu structures and poor screens that make numbers and text hard to read. We’d advise spending a little more money on a better call-blocking cordless phone.

Read the full review of the Don’t Buy Binatone Vesta 1305.