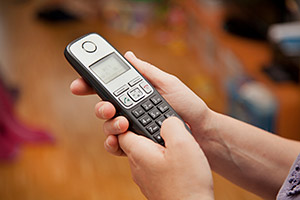 The most sophisticated call-blocking phones act like a virtual secretary

In our latest round of cordless phone testing we’ve uncovered some top-scoring new Best Buys, as well as a number of disappointing Don’t Buys.

We recently tested 24 models in our lab, including handsets from BT, Panasonic, and Binatone.

But, as is often the case, there’s little consistency within each brand. Each had its fair share of good and bad devices – especially when it comes to call blocking.

With nuisance-call complaints at a record high, cordless phones with call-blocking features have never been in greater demand.

Single handsets can be purchased for as little as £15 or as much as £100, but when we test these phones we disregard the price tag and brand name. What we focus on is how easy a phone is to use, the features it offers, the call quality and its cordless coverage.

Discover the models we recommend by visiting our Best Buy cordless phones.

Nip those nuisance calls in the bud

The best call-blocking phones will allow you to store a large number of contacts – some as much as 3,000, which is impressive, even for those with a bulging contacts book. The phone’s internal memory stores the names and numbers of those you want to get through, and you can compile a list of specific numbers you want to block.

As well as barring individual numbers, some call-blocking cordless phones will allow you to prevent particular types of calls. This can include calls from international numbers, mobiles and payphones, as well as unavailable or withheld numbers. Some phones even allow you to set strings of numbers that can be blocked automatically, for example, calls beginning with a certain suffix such as 0843 or 0333.

Callers who are not on your blocked list or allowed list will be asked to say their name. Then you can choose whether you want to accept or terminate the call without actually having to speak to the caller.

If you’re unsure if you want to block the call, you can send them to the answerphone and then add the number to your barred calls list later. Or, if you have already answered the call, most have a one-touch call-blocking button that adds the number to the list of blocked numbers and immediately ends the call. You can then rest assured that the caller will never get through again. Find out more in our best call-blocking home phones guide.

Prices correct as of 28 October 2016. Click through to the reviews for the latest prices.

How to use Houseparty, and what you need to know about security

5 things to watch out for with wireless headphones