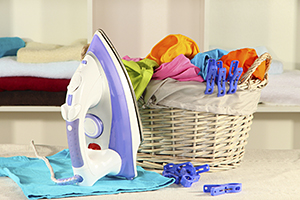 Own-brand irons take on big brands in our tests

Four steam irons have been named Best Buys after acing our tough lab tests, but one model scored a miserable 53%, despite costing more than £100.

Steam irons and generators from big brands such as Philips, Bosch and Tefal battle it out with own-brand ranges from the likes of John Lewis and Wilko in our latest tests.

The four winners will have you breezing through your laundry without breaking a sweat. But the worst-performing model we tried swiftly runs out of steam thanks to its poor limescale resistance.

Despite its high price, this iron has a delicate soleplate that is easily damaged – which could in turn snag and damage your clothes.

Discover which irons made the grade this time, and see all our top-performing models by heading to our best steam irons page.

How own-brand steam irons measure up

Own-brand steam irons are usually cheaper than the big-brand offerings, but they aren’t necessarily more basic.

The Wilko 327988 steam iron costs just £14 but has an impressive line-up of features for the price, including an anti-drip function to prevent water droplets marking your clothes. It also automatically adjusts the steam levels for the temperature you set. Plus it goes from cold to steamy in just 30 seconds, which is handy for last-minute ironing jobs.

The John Lewis Steam Generator Iron 2280 costs around £100 (comparatively cheap for a steam generator) and has some handy ease-of-use features. It switches itself off after 10 minutes if it’s not being used, so no need to stress if you accidentally leave it on. The tank is removable (so you don’t need to take the whole ironing unit over to the sink when you need to fill it up). And a light flashes to remind you when it’s time to rinse out the boiler.

See how these and other own-brand irons from Asda, Sainsbury’s and more compare by visiting our steam iron reviews.

Some irons automatically adjust the steam levels according to the thickness of the fabric you’re ironing. Others – such as the Tefal Smart Protect FV4970 – go further, with a setting that is claimed to supply the perfect combination of steam and temperature for any ironable item. 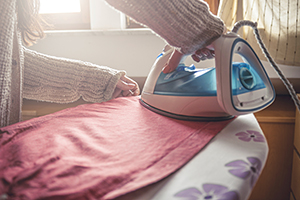 Which? can help you find an easy-to-use iron

These auto controls undoubtedly make ironing easier – particularly the one-size-fits-all setting, which lets you power through your laundry pile without sorting it or fiddling with the controls between items.

But it’s not essential – less than a quarter of our Best Buys have this feature. And it’s not in itself enough to make a Best Buy iron.

It’s important to get a model that is easy to use, as well as excellent at ironing. If you have reduced strength in your hands or wrists, it’s worth visiting a shop and trying out a few models to see how they feel in your hand. Key things to look out for include:

Not too weighty: The average iron weighs 1.7kg with a full tank. Steam generators are often lighter, at around 1.1kg, because the water tank is separate to the iron. The unit itself will be heavier to lift and carry, though.

Has dials and buttons that are easy to press: Especially if you have swollen joints. If the buttons aren’t close together, that’s even better, as there’s less risk of pressing the wrong one accidentally.

Easy to fill and empty: Some irons have tanks that are stiff to open, meaning you’ll need strong fingers. If you’re buying a steam generator, look for one with a removable tank for easier filling and emptying.

Comfortable handle: Check the handle is comfortable, otherwise your hand will start to rub after you’ve been ironing for a long time. Some irons have so-called soft-grip handles, but it’s best to try for yourself. Rubber often feels more comfy.

We test every iron for ease of use, so head to our steam iron reviews to find the perfect iron for you.