The Ford Fiesta is the UK’s best-selling car. After eight years on sale, the seventh generation Ford Fiesta is making way for one of 2017’s most anticipated cars.

Despite almost a decade in showrooms, the sales of the Ford Fiesta showed no signs of slowing. Still, an update was needed and Ford has obliged with the 2017 Fiesta, a car with a fully redesigned interior.

We got the chance to drive the new Fiesta to see if the changes are skin deep and if it has what it takes to continue to be the best-selling car in the UK. Scroll down to watch our exclusive panoramic Ford Fiesta video of the car’s parking assist feature, plus explore the cabin with our 360 degree image.

To find out our car expert’s first impressions of the all new Fiesta, head to our Ford Fiesta review.

The outgoing Fiesta wasn’t a bad-looking car and it’s fair to say the chassis on the seventh generation model has been tweaked, rather than overhauled.

The rear headlights are now horizontal and the roof peak looks slightly more exaggerated, but the sporty nose is largely unchanged. The look is familiar, but the car has grown – it’s 71mm longer and 12mm wider.

There’s plenty of new features in the Ford Fiesta that aren’t immediately apparent, with most focusing on safety.

You don’t need to spend any extra money to get lane assist, but if you want pedestrian detection, distance alert and pre-collision assist it will cost an extra £400. Cross traffic alert is another optional extra, coming in at £475.

Not that great at parking? Active Park Assist is here to help you park. Already available in other Ford cars, you can see it in action in the new Fiesta in our 360 degree video, below.

Once you’re in the car, it’s clear where Ford focused its attention. The cabin is now a more desirable place to be and it certainly looks and feels more upmarket. It’s still largely plastic, but not the hard, cheap kind you’d find in older Fiestas.

Use our image, below, to explore the new cabin. 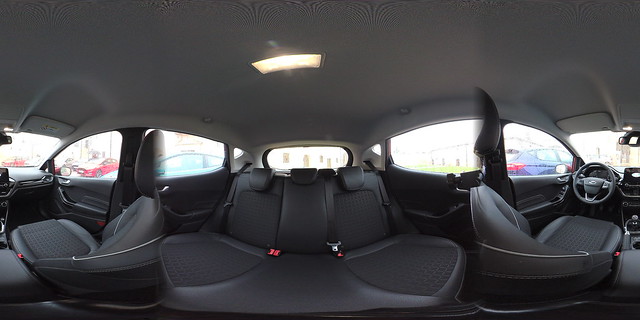 Your eyes are immediately drawn to the 6.5-inch (8-inch for an extra £300 or as standard in the Titanium spec and better) touchscreen infotainment system. It makes the car feel modern and brings it up to speed with its rivals, the VW Polo and Seat Ibiza.

Ford’s push into the smart territory is evidenced here and, regardless of whether you’re an iPhone fan or there’s an Android phone in your pocket, you’ll be able to connect it with the car and access certain apps from the in-car screen.

If you’re in the market for a new Fiesta, there’s no shortage of choice:

The Fiesta’s enduring popularity is thanks largely to how fun they are to drive and the 2017 model is no different. It’s as responsive as ever and Ford has worked on the suspension to make the ride even smoother. The six-speed gearbox, which is now an option regardless of which spec level you choose, only adds to the excitement of driving the Fiesta.

It’s still a breeze to drive thanks to a small turning circle and Ford has done a good job of sealing the cabin from obnoxious engine noise.

Are there any downsides to the Ford Fiesta 2017?

All the improvements to the Fiesta’s cabin don’t come cheap – to get the ST-Line we were driving, you’d need to fork out around £20,000. Whether the Fiesta is as good without all the trimmings is the big question here.

The Style is the base model Fiesta and it starts at £12,715 with a 1.0-litre EcoBoost engine and that six-speed gearbox. You’ll still get the same high quality interior minus the leather that comes with the Titanium model, but you miss out on even the option of adding heated seats, auto parking and a rear view camera.

There’s no 6.5-inch infotainment screen on the Fiesta Syle, and adding the 8-inch one will whack up the price by £750. While another £500 gets the added safety features.

You’ll need to move up to the Titanium model if you want access to all the extras. Prices start at £16,145, or £16,895 if you want the version fitted with a B&O soundsystem.

We’ve got more questions about the new Fiesta that only our lab can answer: how spacious are the rear seats, how much can you fit in the boot and how economical will it be? But the most important one of all is will the new Fiesta be able to match the success of its predecessor?

The top-rated small cars on sale now – see the best small cars for 2017.