For years we’ve complained and campaigned that official fuel-economy figures are inaccurate and can’t be trusted – over 114,000 of you signed up to our ‘Come Clean on Fuel Claims’ campaign to help sort this problem out.

Now we have a result. All brand new generations of cars released after 1 September 2017 will have to go through much tougher tests, and this should help close the gap between official and real-life fuel economy figures, plus reduce levels of harmful emissions from cars.

The government also states that these new tests – called WLTP and RDE – are being introduced as a way of stopping another Dieselgate scandal from happening.

Which? car tests reveal how reliable a car is, the real usable boot and passenger space, and how easy it is to drive. Find your next brilliant new or used car.

If you’ve ever tried to match your car’s official ‘combined’ fuel economy figure (measured in mpg – miles per gallon), you’ll likely find it difficult if not outright impossible.

The main problem stopping you from matching the official figure is that it came from the New European Driving Cycle (NEDC) test.

The NEDC test has been widely criticised and deemed not challenging for modern cars. Worse, it hadn’t been updated since 1997 and allowed potential loopholes to be exploited, such as over-inflating tyres to get better fuel economy. 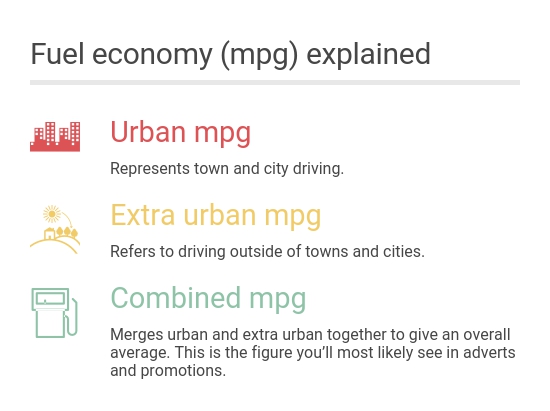 But now, all completely brand new cars will be subject to Worldwide-Harmonised Light vehicles Test Procedure (WLTP), which should be a positive step for consumers.

This is a more challenging and realistic test, and one that Which? has been using for years as part of our independent research into fuel economy and emissions.

The toughness of the test should help produce more realistic fuel economy figures. Also, according to Europe’s leading NGO campaigning for cleaner transport, Transport and Environment, the new test’s conditions will also close the old loopholes that manufacturers could have exploited in the past to gain better results.

All brand new generations of cars released from 1 September, including cars that have been substantially facelifted, will be subject to the new WLTP cycle. All other new cars will have to comply as of 1 September 2018.

But whereas the NEDC measured both fuel economy and emissions, the WLTP will only be used to measure CO2 output and fuel economy. Emissions will be measured by the new Real Driving Emissions (RDE) test. 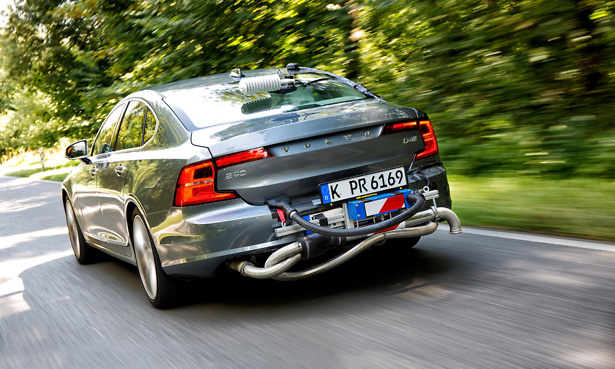 The new Real Driving Emissions (RDE) tests are used to measure ‘real-world’ emission levels of NOx (oxides of nitrogen) and PN (Particulate Number). To find out more about what emissions are created by your car and the implications for your health, see our guide to air pollution from car emissions.

Unlike the WLTP, which is carried out in a lab to ensure comparable results, RDE tests will take place outside and be measured using a PEMS machine (Portable Emissions Measurement system), pictured on the car above.

RDE tests also have a conformity factor, which in essence means a car can produce more than the actual limit of emissions in tests.

Currently, all new diesel cars sold today must emit less than 0.08 g/km of NOx to meet the latest emission limit (known as Euro 6). But in the RDE, until the end of 2019, a conformity factor (CF) of 2.1 applies.

This means cars can produce 2.1 times this limit, or 0.168 g/km of NOx in RDE tests, and still be sold in the UK and Europe.

From 2020, that conformity factor changes to 50%. With the current limit, that means cars will be able to emit up to 0.12 g/km in RDE tests and be declared legal to be sold. 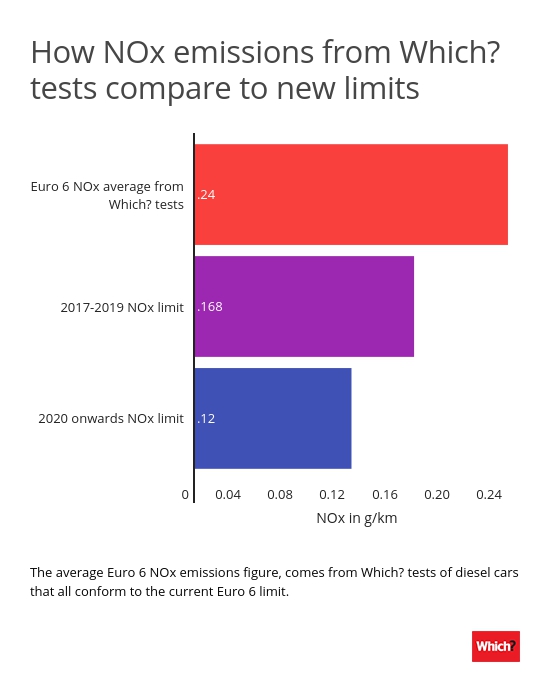 While the conformity factor does seem lenient, manufacturers may not have it easy. From our own lab-based tests, the amount of NOx we’ve measured from cars that officially meet Euro 6 is 0.24 g/km. This is exactly twice as much as the new 2020 limit, and is still noticeably more excessive than the 2017-2019 limit.

Despite the conformity factors, the RDE and WLTP should help bring about more realistic emission and fuel economy figures – but how more realistic remains to be seen. Which? will continue to test independently and not only publish realistic mpg figures as we always have done, but continue to penalise cars that produce excessive amounts of harmful emissions in our own tests.

To find out more, head for our guide on how Which? tests mpg and emissions.