Which? is 60 years old this month and, as part of our celebrations, we’ve been digging through the archives to see what’s changed in 60 years of product testing. When we found out that a Which? member had a working model of one of our first ever Best Buy vacuum cleaners, the popular 1960s Hoover Constellation, we couldn’t resist putting it to the test.

To find out how far vacuum cleaners have – or haven’t – come along in the past 60 years, we picked a modern equivalent from Hoover and compared the results for both on a battery of tough tests including dust pick-up, noise and cleaning up stray pet hair.

When we asked Which? members to vote on which vacuum they thought would win, a nostalgic 60% opted for the older model. Were they right? You can see an overview of the results in the video below, or scroll down to see the full score breakdown.

We wanted to keep the comparison between the old and new vacuum cleaners as fair as possible, so we chose a modern version from the same brand, the bagged Hoover Enigma. Here’s how they measure up on key specs:

The results: old vs new Hoover

Reassuringly, our tests show that things have moved on considerably since the old days when it comes to getting your home pristine, although there are some tests where the older Hoover holds its own. 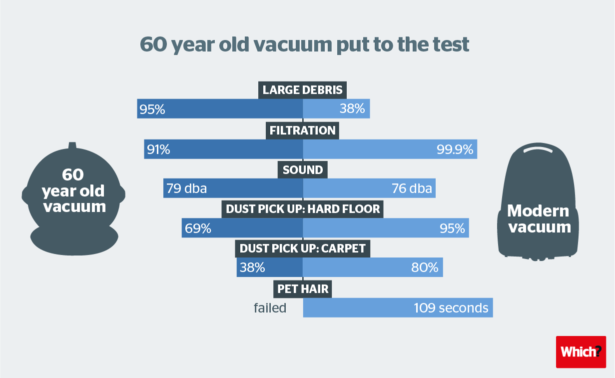 Wins for the modern vacuum cleaner

When it comes to cleaning fine dust from different floor surfaces, the old Hoover is pitiful by modern standards, leaving lots of fine dust behind, particularly in carpets and crevices. It also hardly made an impact when asked to suck up the cat and dog hair that we embedded into carpet. It still hadn’t cleared the mess after three minutes of trying, at which point we stopped the test.

It could be that allergy sufferers are the biggest winners when it comes to the merits of modern vacuum cleaners. The Enigma’s HEPA filter retained nearly all of the fine dust and allergen particles that were fed into the machine, whereas the older Hoover Constellation leaked nearly 10% of these particles back into the room.

Perhaps the final nail in the coffin is how much harder the Constellation is to use compared with a modern equivalent. The floor head on the modern vacuum cleaner is noticeably more flexible and manoeuvrable, making for a more comfortable and upright vacuuming position, especially when cleaning in difficult places such as stairs.

Wins for the old vacuum cleaner

It’s not all bad news for the old Hoover. For starters, it’s still working after many years. Plus, it has a nifty switch that allows you to blow air out as well as suck stuff up – something you rarely find on modern vacuum cleaners. It also surprised us by doing much better than the newer Hoover at one test, and beating plenty of other modern vacs too.

The Hoover Constellation trounced its modern equivalent on this test, picking up 95% of the larger debris in its path, compared with less than 40% for the Enigma. This test troubles a lot of modern vacuums, as it’s difficult to design a floor tool that can sit close enough to the floor to capture fine dust but still leave room for larger crumbs. The average pick-up score from more than 150 currently tested vacuums is 71%, but the very best modern vacuum cleaners can match, and even exceed, the Hoover Constellation on this count.

Which? verdict: battle of the vacuums 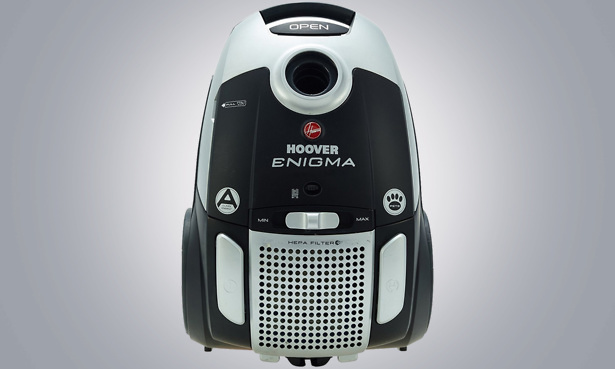 Vacuum cleaners have come a long way since the 1950s and 60s. While we’re still charmed by the imaginative – if not entirely practical – design of the Hoover Constellation, if you’re buying a vacuum cleaner today, you’ll be better off opting for a more recent model.

However, there is still a big difference between the best and worst modern vacuum cleaners. We conduct more than 70 individual assessments of each model in our lab, and even in 2017 we still find vacuums that do a dreadful job of cleaning. To find out which models are worth buying, and the ones to avoid, check our independent vacuum cleaner reviews.

Why we love the Hoover Constellation anyway 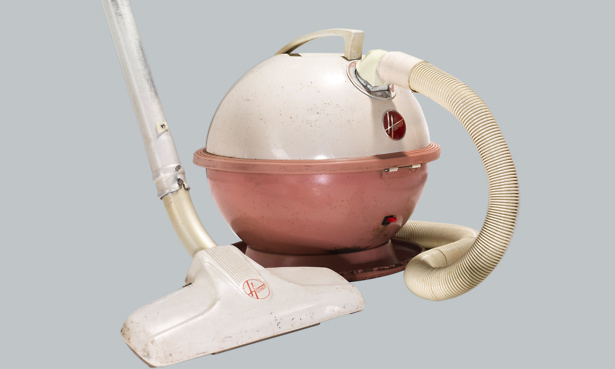 The Hoover Constellation was launched in the midst of the space race, and had a futuristic spaceship-like design. Instead of using wheels, it worked like a hovercraft, floating on a cushion of its own exhaust air. Despite a price that in today’s terms would be right at the top of the scale, it was immensely popular and remained on sale for over 20 years.

In our first ever test of vacuum cleaners, back in 1960, we recommended the Hoover Constellation as a Best Buy, describing it as quiet and manoeuverable, with the best cleaning performance of the models we tested. The main disadvantages were that it was ‘heavier to use on needle-loom carpet than most other vacuums and could only be used with disposable dust bags – a disadvantage for the absent-minded housewife’. That’s a sentence that you won’t find in Which? magazine today!

While Marty McFly’s hoverboard has (sort of) become reality in 2017, floating vacuum cleaners sadly didn’t really take off. However, today’s booming cordless market shows there’s still plenty of room for innovation in the world of vacuum cleaners. If you fancy going cord-free, check our cordless vacuum cleaner reviews to find the best options.