While burglar alarms are a valuable way of deterring potential thieves from targeting your home, it seems they can get a little confused about what counts as a break-in, with more than a quarter of you reporting that an insect had triggered an alarm.

An insect inside the house was the most common cause of a false alarm. Other top reasons included the alarm being turned on by mistake and a pet triggering the sensors. Scroll down for some of the more unusual situations you told us about. 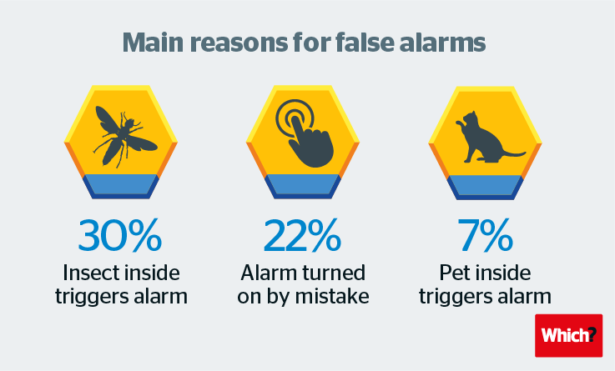 When we asked people to explain why their alarm had gone off, we got some pretty interesting responses:

‘Our budgie set it off, as he was attracted to the sensor light.’

‘A deer came up to the patio window and was picked up by the PIR (sensor/motion detector).’

‘A spider caused the alarm to sound in the middle of the night. I removed the spider and reset the alarm.’

‘The postman pushed our letters through the letter box too enthusiastically, setting off the motion sensor in the hall.’

‘A metallised helium party balloon was left in the hall when we went away. It slowly deflated and sank in sight of the sensor – how random is that?’

Read on to find out how you can minimise false alarms. If you’re considering buying a alarm, find out how alarm owners rate big brands, including ADT, Honeywell and Response, in our guide to the best and worst burglar alarms.

What happens when an alarm is triggered

When we asked people what happened after their false alarm was triggered, the top three things were:

What happens when your burglar alarm goes off, whether or not it’s a false alarm, partly depends on what type of alarm you have.

18% of the 3,412 people we spoke to have a monitored alarm. For these alarms, you pay a monthly or yearly fee to an alarm monitoring company, which will be notified when it is triggered.

The company will then either contact the police, or one of your nominated ‘keyholders’, depending on the type of contract you have chosen.

The majority of people (81%) have a standalone, or bells-only alarm. These make a loud noise when triggered, which can be a good deterrent. But nothing more will actually happen unless a willing neighbour checks it out.

Some alarms will contact you directly when they are triggered. Dialler alarms will call or text your mobile phone, or that of a keyholder, using a Sim card that you’ll need to keep active and topped up.

Smart alarms sync to your smart phone through an app, often as part of a wider security system, such as smart locks or security cameras. While these are usually free to use, they can sometimes require a lot of online data storage, particularly if they record camera footage around your home.

Find out more about the different types of burglar alarms in our guide to home security.

Have you experienced a false alarm? Let us know why in our poll below.

Any false alarm is annoying, but more than one is infuriating. A small percentage of the people we asked have had as many as five false alarms in the last year.

If you have a monitoring contract in which the police are notified when your alarm goes off, three false alarms (four in Scotland) can mean you’re struck off the police register and they won’t respond again.

Even with a standalone alarm, a number of false triggers may mean that your neighbours are less likely to investigate when it goes off.

Here are our top tips for minimising the risk of false alarms:

While mistakes can happen, it’s important to take all alarms seriously, in case there is a problem. If you have a bells-only alarms, it’s worth speaking to a neighbour you trust and giving them your phone number and possibly a key, so they can let you know or go in if something doesn’t seem right.