There’s been a rise in the number cases of scarlet fever this winter, according to figures release by Public Health England.

The peak period for scarlet fever is over the winter months. There have been 6,225 cases reported in England between mid-September 2017 and the end of January 2018. In the same period the previous year, there were 3,764 cases. This is the highest since the 1960s.

Experts aren’t certain about the exact cause for the rise, but suggest it could be down to increased awareness and reporting.

Where are scarlet fever outbreaks happening?

While there are cases occurring across the UK, certain areas have seen higher numbers than others. These include the north west and the south east of England. The highest number of incidences is in the South East, which has seen 1,119 cases, followed by 1,053 in the North West and 779 in Yorkshire and the Humber.

What is scarlet fever?

Scarlet fever is a bacterial infection that causes a range of symptoms. It’s very contagious and more common in children under 10 than in teenagers or adults.

Scarlet fever was once considered a very dangerous illness that could often lead to death in babies and young children, right up until the early 20th century.

Thankfully, the widespread introduction of antibiotics means the infection is not considered to be as serious nowadays. 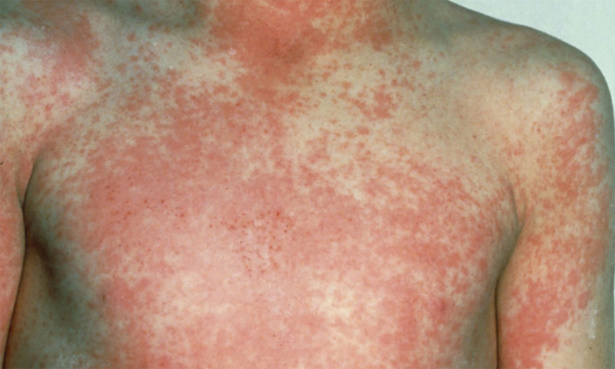 What are the symptoms of scarlet fever?

Nick Phin, deputy director at Public Health England, said: ‘Scarlet fever is not usually a serious illness and can be treated with antibiotics to reduce the risk of complications and spread to others.

‘We’re monitoring the situation closely and remind parents to be aware of the symptoms of scarlet fever and to contact their GP for assessment if they think their child might have it.’

If you spot any symptoms, contact your local GP or NHS 111.

General advice is to keep your child at home to reduce the spread of infection, ensure they have plenty of fluids and infant paracetamol if they seem in discomfort.

Discover more information by reading our guide to Calpol and other infant paracetamol pain relief.