TVs are no different. Leading brands Sony, Samsung, LG and Panasonic strive for new ways to make their TVs stand out from the competition and previous years’ models.

Often it falls on new technology, most recently HDR, voice control and Internet of Things (IoT) features, to make each annual batch of TVs more desirable.

But the fast-moving world of TV tech usually advances quicker than is really necessary. The first 4K TVs came out more than six years ago, long before there was any meaningful amount of content that could come close to justifying the purchase of one.

Six years on, there still aren’t any 4K channels and you can still buy Full HD TVs that don’t support 4K. So why should you upgrade your TV and, when you do, why shouldn’t you choose a cheaper Full HD model?

It’s fair to say the vast majority of what people watch on 4K TVs will be HD channels from Freeview or a pay TV services, which is why we continue to see how good these TVs are at displaying HD and SD video.

Interestingly, our recent tests have found that, on average, 4K TVs are better at showing HD content than Full HD sets. Whether you’re after a 40, 43, 50 or 55-inch TV, your favourite HD channels and Blu-rays will look better on a Best Buy 4K TV.

The table below shows the difference in score in our HD TV test. While the results are close, so too are the cost of many 4K and HD TVs. 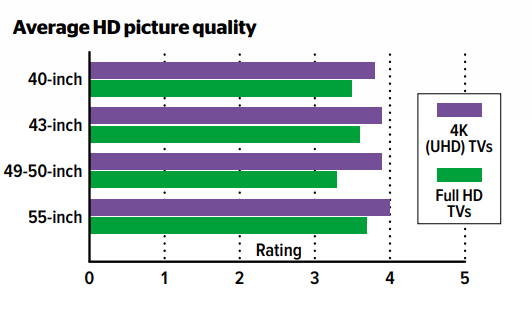 By choosing a 4K TV, you’ll get better HD picture quality and you’re ready when the 4K channels do launch. Plus, there’s now a fair bit of 4K content to watch in the meantime.

The caveat is that you really need to be signed up to either Netflix or Amazon Video. Streaming services are leading the way when it comes to 4K content.

All of Netflix’s original programming, which includes Stranger Things and Altered Carbon, is available in 4K. The same goes for Amazon Video and its original shows. There are a handful of 4K movies included with the Prime membership and plenty more to buy or rent.

If you have a 4K UHD Blu-ray player, you can explore the ever-expanding library of 4K Blu-rays. Many big cinema releases get a 4K Blu-ray alongside a regular Blu-ray.

Older films are also getting 4K Blu-ray releases, in the same way that some films only available on DVD were eventually released in a Full HD Blu-ray format.

Those with a Sky box or BT TV can watch the Premier League in 4K, but there’s no sign that we’re going to receive dedicated 4K channels any time soon, so this sort of broadcasting seems limited to certain shows or sporting events for now. Read more about Netflix, Amazon Prime Video and Now TV in our guide to TV streaming services.

4K TVs are getting cheaper – but when’s the best time to buy?

For every £2,000 4K TV, there are twice as many that cost a half or even a quarter of that. The cost of manufacturing 4K TVs has dropped significantly, which means Full HD TVs are no longer the only bargains to be found.

The latest 2018 TVs have already started to appear, but premium TVs come first. Cheaper TVs will arrive later in spring and the prices will drop as the year goes on. In 2017 we saw the price of some TVs fall by more than half between their release and Christmas.

There’s still time to get a great price on TVs released in 2017, too. They will be withdrawn from sale as more 2018 TVs are released, but for now they are available at bargain prices in some cases.

See our list of the best cheap TVs if you don’t want make too big a hole in your wallet. You can also look at our top TV deals for April.