Fares continue to rise but many train companies are failing to keep fed-up commuters happy, according to our latest passenger survey.

Northern and Thameslink, whose passengers suffered as a result of disastrous timetable changes last year, were both ranked in the bottom three for customer satisfaction, alongside Southern.

Northern received the lowest customer score, achieving just 32%. It scored only one star out of five in eight out of the nine categories we asked passengers to rate, including punctuality, reliability, customer service and value for money.

We asked more than 10,000 train passengers to rate their train service over the past year, across 30 train companies. This included almost 4,000 experiences of travelling by train to work or study.

Stressful commute? How to claim compensation for train delays

How does your train company perform?

Our table below shows the highest and lowest rated train companies in the UK – or you can head to our full guide to look up your train company.

The human impact of delays and disruption

Around half of commuters told us they frequently found travelling by train stressful. Many felt train delays had had a knock-on impact on other parts of their lives, including:

Some people even reported moving house to escape a nightmare commute. Ex-Northern passenger Jonathan Lee-Smith ended up leaving his job and taking another one in a different part of the country: 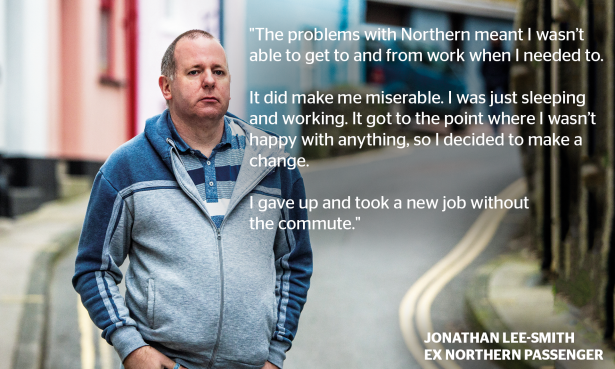 Read Jonathan’s story as he shares why he felt he had to leave his job and relocate.

Other commuters told us of missed bedtimes, work pressures and general stress.

The latest figures from Which?’s consumer insight tracker also reveal a growing level of distrust of the rail industry. It now stands at 32%, five percentage points higher than a year ago.

Put the interests of passengers first

Which? Managing Director of Public Markets Alex Hayman said: ‘It is shocking that a modern transport system is allowed to have such a negative impact on the people who rely on it every day. Its failures are affecting people’s health and employment, and some are even forced to move home as a result of the disruption.

‘If the government rail review is to have any hope of restoring faith in the system it must listen to passengers, who have too often been an afterthought.

‘However, train companies should not wait for the results of the review to take action. The industry must start putting the interests of passengers first to address the chronic issues identified in our survey.’

Delays and disruption has a real impact on people’s lives, and their work and families are being affected. The rail system needs to work for passengers not just the rail industry.

Fed up with train pain? Join more than 116,000 passengers and support our campaign to demand a better train service.