Which? is calling on the government to urgently publish the results of a report into Whirlpool’s fire-risk tumble dryers – as fresh concerns emerge over the company’s fix programme and handling of safety concerns.

Which? has heard from more than 30 owners who have said that their ‘fixed’ tumble dryers have caught fire, produced smoke or the smell of burning.

The owners include a mother forced to flee with her two young children as a tumble dryer fire engulfed their garage.

It’s nine months since the government Office for Product Safety Standards (OPSS) launched an inquiry into Whirlpool’s handling of its fire-risk tumble dryers and the fix programme. But to date no results have been made public.

Whirlpool continues to claim there have been no reported incidents where the fix has proven to be ineffective.

Affected customers need urgent clarity on whether Whirlpool’s fix is safe. If that can’t be guaranteed, the government must step in and finally issue an urgent recall of all affected machines.

In 2016 Whirlpool admitted that millions of its Hotpoint, Indesit, Creda, Proline and Swan dryers in people’s homes have a fire problem.

The company instigated a countrywide modification programme meant to make affected dryers safe to use.

In April 2018 we reported on a ‘made-safe’ dryer that caught fire two years after being modified by Whirlpool.

The same story featured details of another repaired machine with a heater partially coated with singed fluff.

Since then we’ve surveyed 1,085 owners of dryers that have been modified as part of Whirlpool’s repair programme.

662 people responded to our survey and 22 of them – 3% of all respondents – told us that their repaired dryer has produced smoke or smelt of burning since it has been repaired.

A further 12 owners of repaired dryers contacted us via Which? magazine to report similar issues, with six of them reporting that their dryers had caught fire.

Is there a fire-risk dryer in your home?

Even though our research has shown that Whirlpool’s repair might not work every time, we’d still recommend you get the fix done. And if you own an unmodified fire-risk dryer, stop using it until you’ve had the modification carried out.

Whirlpool has told us it conservatively estimates there could be 300,000 to 500,000 of these machines still out there unmodified.

Check if your tumble dryer is on our list.

One Which? member, Craig, told us how his Indesit IDV75 vented tumble dryer was modified in 2017.

Fluff had built up around the heating element and the member told us he was lucky to be at home when the fuse tripped.

Whirlpool provided him with a new dryer for free.

Another Which? customer, Ann Jarvis, told us that her dryer continued to produce a ‘hot smell’ even after it had been repaired by Whirlpool. After an engineer’s inspection she was told that the repair had failed and the seal on the back panel had peeled off.

We’ve also heard from an owner of a Whirlpool tumble dryer manufactured after the safety alert was made public and whose dryer should have been safe from the moment it left the factory. However, just like the fire problems we’ve heard about with repaired fire-risk dryers, this newer model also caught fire.

The owner, Nigel Day, told us that fluff ignited on the heater and the foam seal at the back of the machine caught fire. 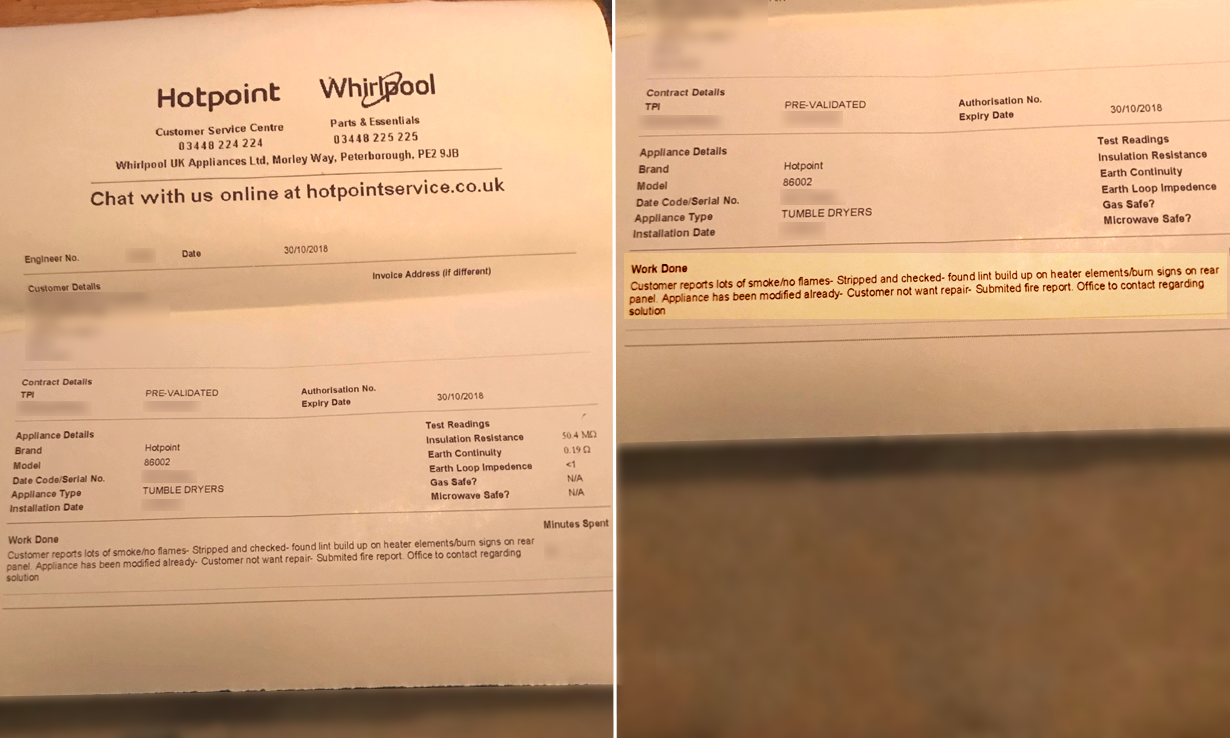 When we contacted Whirlpool with the findings of our investigation in late November 2018, it told us that there had been no reported incidents where the modification had proven to be ineffective.

However, a report from a Whirlpool engineer tells a different story.

In October 2018, Rebecca Robinson’s Hotpoint dryer started to produce smoke and she could smell electrical burning. Luckily, she was in the room and managed to isolate the dryer immediately.

In the engineer’s report (dated 30 October 2018) after inspecting the previously made-safe dryer, the engineer detailed, ‘lint build-ups on the heater element and burn signs on the rear panel’.

It’s this build-up of lint on the heater that Whirlpool’s modification was designed to stop.

Whirlpool told us that it has total confidence in the dryer modification, which has been tested and is supported by UK regulatory bodies. It said it investigates all concerns relating to its products and tells us there have been no reported incidents where the modification has proven to be ineffective.

A spokesman told us Whirlpool hasn’t been able to fully investigate fully due to Which? failing to share essential details and that it questions Which? research methods.

A Whirlpool spokesman went on to say: ‘Nothing matters more to us than people’s safety – anyone who owns an affected appliance should contact us immediately on 0800 151 0905 and have their machine repaired within a week.’

Why isn’t the government stepping in?

Nine months on from the launch of a regulatory inquiry into the Whirlpool modification programme, the Office for Product Safety and Standards (OPSS) is yet to publish its findings. However, Which? continues to hear from affected Whirlpool customers about concerning issues with their modified tumble dryers.

The OPSS must ensure it has fully investigated any evidence of Whirlpool machines catching fire after being modified and how the manufacturer is dealing with affected customers, as part of its inquiry.

With Which? finding more examples of repaired Whirlpool fire-dryers posing a fire threat, we’re calling on the OPSS to urgently release the findings of its investigation, so affected customers can be confident that their modified machines are safe.

Alex Neill, Which? managing director of home products, said: ‘The regulator’s investigation cannot continue to drag on when serious questions remain unanswered about Whirlpool’s approach to the tumble dryer scandal.

‘It’s very concerning that hundreds of thousands of at-risk machines are still in people’s homes, and that there is still uncertainty over whether the repair programme actually works.

‘The OPSS must urgently release the findings of its investigation. If it finds Whirlpool has failed to put the safety of its customers first, the regulator must take robust enforcement action, including a full recall if necessary.’