A major IT shutdown that stops customers from making payments happens to at least one UK bank every day, Which? Money analysis has found.

In the most comprehensive analysis carried out since banks started disclosing serious IT and security failings last year, we identified 302 incidents affecting customer transactions in the last nine months of 2018. The data reveals that major banking crashes are far more common than previously thought.

Read on to find out how many glitches and security breaches your bank suffered.

Which banks suffer most IT failures?

Since April last year, the Financial Conduct Authority (FCA) has required banks to inform them of any major operational or security incidents which affect payment processing.

In total, 302 reports were made between 1 April 2018 and the end of the year, Which? Money found by analysing the latest reports from 30 banks and building societies.

You can see the full data in the table below. Note that figures relating to banks within the same group cannot be added together to form a total because a single incident may have affected multiple brands within the group.

Spokespeople for Barclays, RBS Group and Lloyds Banking Group (which includes Halifax and Bank of Scotland) emphasised how seriously their organisations take IT glitches, no matter how minor.

Unfortunately, the data does not tell us how long services were unavailable for in each instance reported to the FCA.

Is the UK ready to go cashless?

When online banking goes down, you may need to rely on cash, but what if it’s no longer an option? Our latest findings, along with incidents like last year’s Europe-wide Visa payments outage, suggest that Britain’s financial system has a long way to go before it will be resilient enough to support a cashless society.

That’s why we are calling on the government to appoint a regulator to oversee cash infrastructure in the UK. Here, you can find out more about our campaign Freedom to Pay. Our way.

Which? Money editor Jenny Ross says: ‘Our research shows that these major banking glitches, which can cause huge stress and inconvenience to those affected, are even more common than we feared.’

‘This highlights why it is so important that a regulator is given responsibility to protect cash and other non-digital payments as a back-up when technology fails and to ensure no-one is left behind as cashless payments grow in popularity.’

Our previous research has found that ATMs and bank branches our disappearing at unprecedented rates across the country. We found cashpoints vanished at a rate of 488 per month in the second half of last year, while more than 3,300 bank branches have closed since 2015.

Freedom to Pay. Our Way

The lack of resilience in UK banks’ remote banking systems is just one the reasons we’re demanding the government steps in to secure the future of cash.

We’re also concerned about the more than 25m people who consider access to cash a necessity.

These include people like Gem Turner, from Yorkshire, who need cash to do the ‘everyday things that a 25-year-old wants to do’.

Gem has brittle bones and uses a powered wheelchair. She told us: ‘I’d lose my independence if I didn’t have access to cash.’ 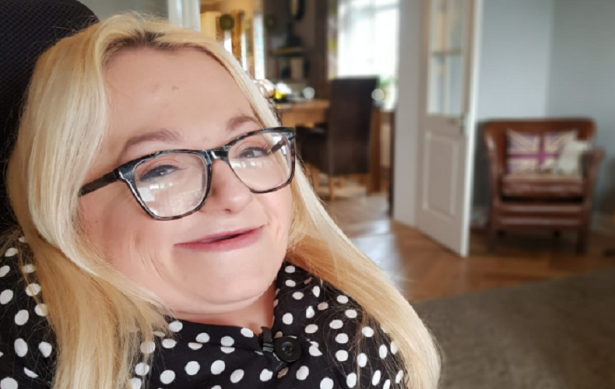