From the mines their components come from to the landfill sites they end up in, our electronic devices leave deep ethical and environmental footprints on our planet. However, there are steps we can all take to reduce the global effects of our tech habit.

To find out more about the ways our technology affects the environment and communities around the world, we’ve tracked the lifespan of a smartphone – the most-frequently replaced gadget most of us own.

Watch the video below and read on to discover how we, and the companies we buy from, could be doing better.

What’s in a smartphone?

Smartphones – and most other electronics – contain more than 33% of the 92 naturally occurring elements. Four of these elements – tungsten, tantalum, tin and gold – are known as conflict minerals. 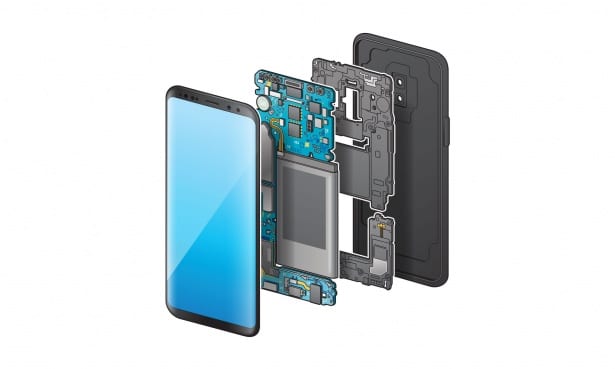 Tungsten: With twice the density of steel, this is used as a counterweight in a spinning motor that allows your phone to vibrate.

Tantalum: Resistant to corrosion, this helps control the flow of electricity in your phone’s circuits.

Tin: Its low melting point means tin is used for soldering and circuit boards. It’s also in touchscreens, combined with indium and oxygen.

Gold: A highly efficient, reliable, corrosion-resistant conductor. Phones use very low voltages and currents that are easily interrupted by tarnishes, so small amounts of gold are used all over phones to keep them working for years.

What are conflict minerals?

Tungsten, tantalum, tin and gold are often referred to as conflict minerals because their theft and sale have been linked with funding killings, violence, rape, and other human rights abuses in the Democratic Republic of Congo (DRC) and other conflict zones. The conflict in the DRC – the Second Congo War – has been the deadliest since World War II. 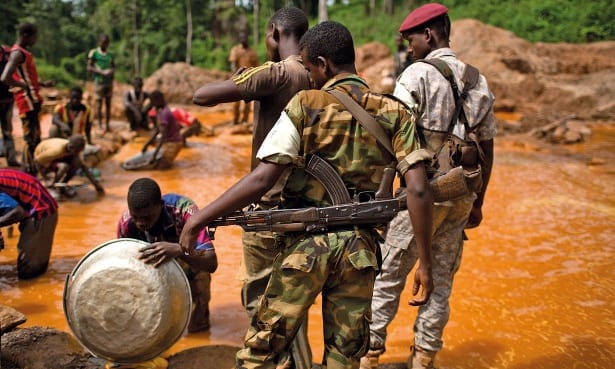 In 2010, the Dodd-Frank Act Section 1502 was passed in the US, as part of the US government’s Dodd-Frank Wall Street Reform and Consumer Protection Act, after increased pressure from activists concerned about the use of conflict minerals. The Act forces all US-registered companies to publish their sources for tantalum, tin, tungsten and gold. Affected companies rushed to fix the problems in their supply chains, and take greater care to avoid using minerals from smelters linked to corruption and conflict. The outlook has greatly improved.

However, many companies are still not transparent about where their minerals come from or how their supply chains operate.

Which smartphone manufacturers use conflict-free minerals?

It’s very hard to tell exactly where the minerals in your smartphone come from. However, some companies are considerably better than others when it comes to publishing information about their efforts to audit their supply chains and source conflict-free products.

According to original research by Ethical Consumer, commissioned by Which? and conducted in February 2019, smartphone manufacturers can be ranked based on their transparency and commitment to using conflict-free minerals.

We’ve ranked the most popular brands below, with scores out of 10: 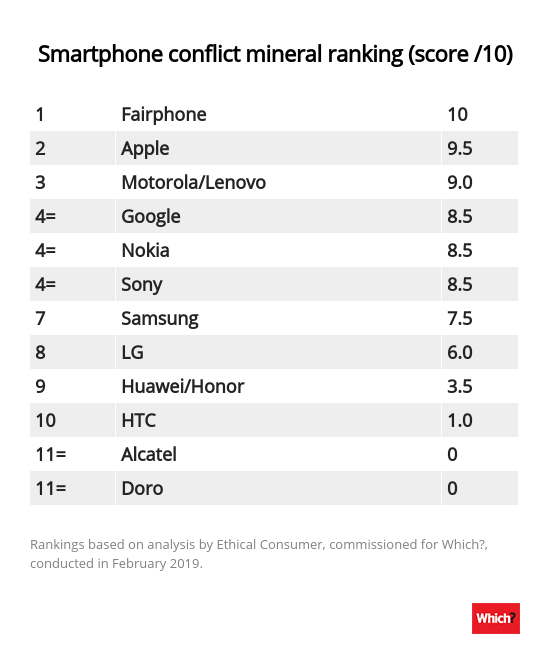 As part of our investigation, we put a Fairphone through Which? testing to see how it compares on performance to the big smartphone brands.

Unfortunately, it’s not likely to be a Best Buy any time soon. But if its ethical credentials are appealing and you’re willing to sacrifice functionality, head to our full Fairphone 3 review to find out how it fared in our test lab.

To see how all the smartphone brands compare in our test lab, visit our full set of smartphone reviews.

Once they’ve been sourced, the minerals and other components head to a manufacturer to be turned into smartphones. The largest phone manufacturers are Samsung and Foxconn. Foxconn makes the iPhone as well as products for Sony, Intel, Microsoft and Google.

The Foxconn factory in Shenzhen, China, (pictured below) is the size of a town and employs hundreds of thousands of workers to produce most of Apple’s iPhones. Foxconn’s factories are widely reported to have poor working conditions and low pay. 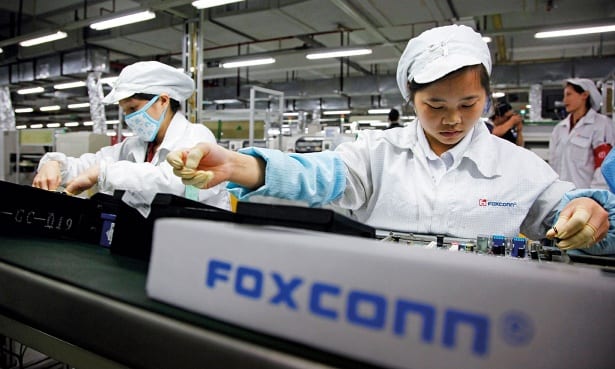 It’s not just conflict minerals that are causing problems for those involved in electronics production. Other elements used include beryllium, cadmium and mercury, all of which are toxic, and toxic by-products are released during assembly.

In November 2018, Samsung publicly apologised to factory workers who had developed cancer after exposure to toxic chemicals in one part of its supply chain – semiconductor manufacturing. Semiconductors are an essential component in most electronic circuits.

It’s clear that manufacturers still have a long way to go to ensure our tech products are sourced and manufactured in a responsible way.

The problems with smartphone disposal 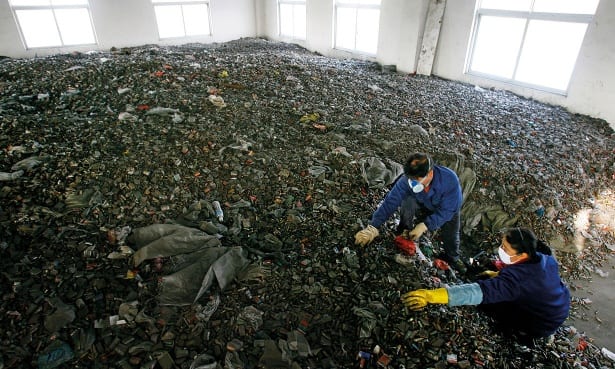 While used electronics certainly shouldn’t end up in landfill, recycling them is a difficult process and should be considered a last resort for products that really have reached the end of their usable lives.

A lot of our electronic waste (or e-waste) is exported to countries such as Vietnam, China, Nigeria and Ghana, where it ends up in huge – sometimes illegal – e-waste sites.

Communities in those countries separate out and resell the precious metals. But it’s not easy to break e-waste back down into its constituent parts. The quickest and most common way to separate e-waste into raw materials is to burn it, releasing harmful chemicals into the atmosphere, including lead, cadmium and numerous carcinogens. The air above e-waste sites is often turned aqua blue by thick toxic smoke.

What should we do with old tech products?

Most old electrical items will be perfectly usable to someone else. If you can’t find someone to sell yours to, or if it needs to be repaired first, think about selling it on to a dedicated refurbishing programme. These schemes will pay you for your old phone and then sell it on again, after refurbishing it.

Depending on the state it’s in, you can sometimes make a surprising amount of cash by selling your phone to a refurbishing company: 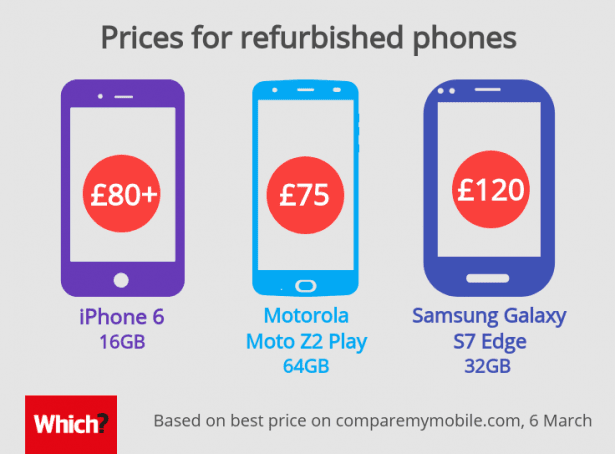 Alternatively, you may prefer to give it to a charity that takes electrical items or sell it on to a friend or relative.

Five ways to reduce your footprint

A 2016 report by Kantar Worldpanel estimated the average smartphone life expectancy in the UK to be 23.5 months. At that rate, those getting their first phones at the age of 14 and living to the UK average of nearly 81 years old would own 35 smartphones in their lifetime.

Despite that fast turnaround, when we surveyed 6,404 smartphone owners in June-July 2018 to find out how long their smartphones had lasted, we found that most stay fault-free for as many as five years.

Ultimately, the best way to reduce your footprint in this area is to make sure your current and future phones last as long as they possibly can, and that you dispose of them responsibly when you do have to get rid of them.

Here are our top five ways to do it:

1. Don’t upgrade your current phone sooner than you need to.
Most smartphone contracts are 24 months long, after which your provider is likely to encourage you to upgrade to a new handset.

But switching to a Sim-only tariff for your existing handset will be a lot cheaper, and more environmentally friendly. Read our guide on how to get the best sim-only phone deals.

2. Replace your battery rather than the whole phone.
A new battery can give your phone a new lease of life, and will sometimes speed it up, too. New batteries will be available through the official manufacturer, as well as third parties. Read our guide to how to repair your smartphone for more tips.

3. Consider buying a refurbished or used phone rather than a new one.
When it is time to upgrade, you may find you can get a good deal on a second-hand model. These are available from most major retailers – read our how to buy the best second hand phone guide for more details.

4. Sell your old phone, give it to a refurbishing or recycling company, or donate it to charity.
Just don’t forget to protect your data by restoring it to its factory settings before passing it on.

5. Choose a phone you know you’ll want to hold onto for longer.
You’re more likely to keep your phone if it’s a Best Buy model from a company with a good reliability record. Use our smartphone reviews and data on the most reliable smartphone brands to find out which phones will stand the test of time.

What’s the future of smartphone sustainability?

To find out what the UK is doing to combat this issue on a wider scale, we spoke to the Department for Environment, Food and Rural Affairs (Defra).

A spokesperson told us that the government is committed to the UK becoming a world leader in using resources efficiently and cutting the amount of waste we create. This includes prolonging the lives of the materials and goods that we use, and moving away from the traditional ‘linear’ economic model of ‘take, make, use, and throw’.

According to Defra, the government will match or, where economically practicable, exceed the ambition of the EU’s proposed Ecodesign standards.

The current Ecodesign Directive provides consistent EU-wide rules for improving the environmental performance of energy-consuming products. However, a 2018 proposal called on the European Commission to take these standards beyond energy efficiency, and consider aspects such as how long a product lasts and how repairable and recyclable it is.

These standards will force manufacturers to:

Here at Which?, we also want to look more closely at the sustainability practices of the companies we use every day, giving you recommendations for not just the best products, but also the most responsible brands.

Head to Which? Conversation to hear from Which? head of product research Mike Briggs and have your say on what this means for Which? product testing.

Update 28/03/2019: In the print version of this investigation we commented that Samsung had been fined by the Italian Competition Authority (ICA) for improper software updates which led to a reduction in older smartphone models’ performance. Samsung has since responded to Which? to say that it disagrees with the ICA’s decision and has appealed to the court accordingly. It states that it has always released software updates enabling its customers to have the best experience possible.