Metro Bank shares have plunged 70% since January, after an accounting error sparked fears for its financial health. So, if you’re a Metro Bank customer, should you be worried?

The challenger bank, which has 1.7 million customers, discovered a funding gap in its accounts in January 2019. Its share price subsequently tumbled, while its profits halved compared to the same three months of 2018.

Metro Bank customers have also been spooked by false rumours, circulated on WhatsApp this weekend, that safety deposit boxes may be at risk. Yet the bank has reassured customers that there is no cause for concern.

Which? explains what’s happening at Metro Bank and how your deposits are protected.

Why are Metro Bank shares falling?

In mid-January, Metro Bank announced that hundreds of millions of pounds worth of commercial property and buy-to-let loans had been misclassified on its books.

These types of loans are generally considered high-risk, so banks are required by regulators to set aside more money to cover them in the event that they are not repaid.

The mis-classification meant that Metro Bank didn’t have the capital that is required by regulators to cover its ‘loan book’ – a way of describing the value of the loans the bank has provided.

Metro Bank revealed in February that both the Financial Conduct Authority and the Prudential Regulatory Authority are now investigating.

Profits for the first three months of 2019 were £4.3m, half of the same time the year before.

Update: Metro Bank confirmed it had raised £375m in additional funding on Friday 17 May. The PRA issued a statement welcoming the news, stating: ‘Metro Bank is profitable and continues to have adequate capital and liquidity to serve its current customer base. It has raised additional capital in order to fund future growth.’

Metro Bank is the only major bank with a high street presence that still offers safe deposit boxes.

These boxes can be a convenient place for people to store valuable family heirlooms such as jewellery, as well as important documents such as wills and insurance policies.

This weekend, the bank was shaken by fresh controversy, as some west London branches saw queues of customers looking to withdraw their deposits.

This wave of concern may have been partly fuelled by false rumours spread by WhatsApp messages, which warned the bank was in trouble and encouraged people to empty their safety deposit boxes.

What has Metro Bank said?

A spokesperson told The Guardian: ‘There is no truth to these rumours and we want to reassure our customers that there is no reason to be concerned. We’re a profitable bank, rated No 1 for personal current account service by the CMA and committed to serving our 1.7 million customer accounts.’

Indeed, despite its struggles, the bank gained 97,000 new customers in the first quarter of the year.

The lender also said plans to raise £350m in additional capital from shareholders are ‘well-advanced’.

In relation to the WhatsApp rumours, it posted on social media that customers’ cash was safe. The bank also confirmed to customers that it would not, under any circumstances, take ownership over the contents of safe deposit boxes. 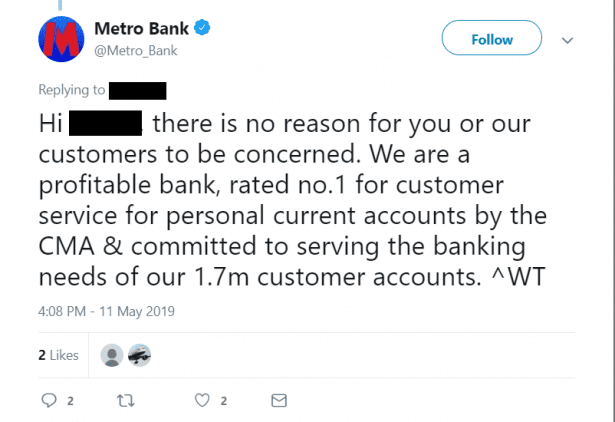 Are my savings protected?

Deposits you make with an authorised UK bank are protected under the Financial Services Compensation Scheme (FSCS), which offers backing for deposits of up to £85,000 per provider. Metro Bank is part of the FSCS.

This means that if your bank goes bust, you’ll be refunded up to that limit.

If you hold more than £85,000 with one bank, however, you may risk losing a chunk of your savings.

For this reason, it can be wise to split your cash between different providers, or to save with NS&I, which guarantees the full value of your deposit.

Keep in mind that some banks are owned by the same provider – for example, if you have accounts with HSBC and First Direct, you’d only be covered for £85,000 spanning across both. Some smaller card or payment providers, such as Revolut, may hold your deposits with a third-party bank, so check to see where your money is kept.

The contents of safety deposit boxes, meanwhile, should remain under customers’ control, even if the bank were to fold.

What is Metro Bank?

Primarily based in London and southeast England, Metro Bank has positioned itself as a challenger to the major players.

Unlike its app-based rivals, such as Monzo or Starling, Metro has made its mark with distinctive no-appointment high street branches.

Indeed, when it opened in 2010, it became the first high-street bank to launch in the UK in more than 100 years.

The bank was well-rated by its customers in the most recent Which? survey of UK banks, scoring a respectable 76% – although this research was conducted in August 2018.

You can find out more in our guide to best and worst banks.