When you buy a radio described as a ‘portable radio’ with ‘optional’ battery power, you could well assume that the radio would give you the choice of battery power out of the box. But you’d likely be mistaken.

Some of the top radio brands charge extra for the battery packs for some of their radios. And these battery packs can cost up to £45, which, in some cases, is more than a third of the cost of the radio itself.

We expose the practice of top radio brands such as Pure and Roberts charging high prices for separate battery packs. Read on to see what these radios really cost if you want to use them away from the mains.

Or skip to our expert reviews for Best Buy radios.

No one likes hidden extra costs on purchasing a product, and we’ve found that some radios are advertised as ‘portable’ despite not being so straight out of the box.

For example, Pure describes the popular Pure Evoke H4 radio as a ‘Portable DAB/DAB+ and FM radio’, and that it ‘can be powered by the supplied main adapter or with the optional ChargePAK F1’. This is the brand’s unclear way of saying that the charge pack to this supposedly ‘portable’ radio isn’t included in the box. And despite the radio costing £134, the charge pack costs a whopping £38 extra, with no option to use standard off-the-shelf batteries.

It’s a fair argument that some people won’t want to use these radios under battery power and will be happy to run them solely from the mains. But there will also be people who, if they had known the information upfront, would have made a different purchasing choice had they known the battery pack was not going to be included.

We think radio manufacturers should be much clearer about whether the battery packs are included in the box, or come as an added extra. In addition, radio manufacturer VQ is able to provide these batteries for only £20, while Pure and Roberts charge far more – without any clear reason why.

The table below includes big-brand radios on the market which you can buy separate battery packs for, and which aren’t included in the box: 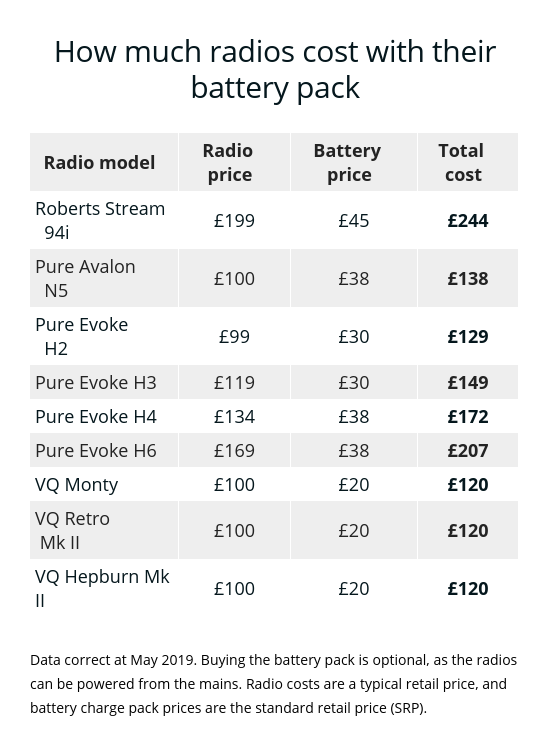 Below, we highlight some of the most popular radios with sold-separately battery packs. Follow the links to our reviews to see whether they’re worth your money or whether the radio itself is a deal-breaker. 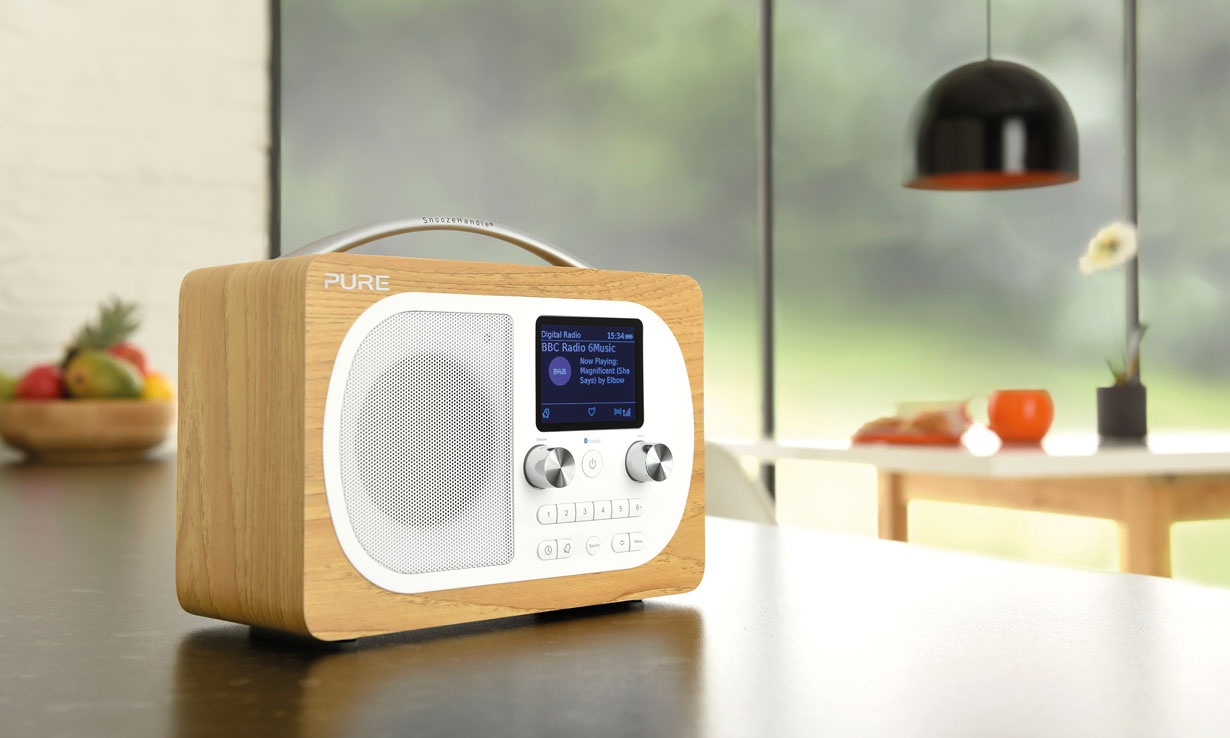 You might think the premium price of the Evoke H4 would mean Pure would be able to include the ‘optional’ battery pack in the box, particularly when it calls this a ‘portable’ radio on its website. But this isn’t the case.

The £38 added cost of the required battery pack (Pure ChargePAK F1) means you’d end up spending a hefty £172 in total to make this model really portable.

The Pure Evoke H4 is a DAB+/FM radio with Bluetooth, which allows you to stream audio and access internet functions from your smartphone. The radio’s wooden casing gives it a premium feel, and the 2.8-inch colour screen should make it easy to operate.

Is this an amazing radio with superb sound and ease of use that justifies its price? Our experts give their verdict in our Pure Evoke H4 review. 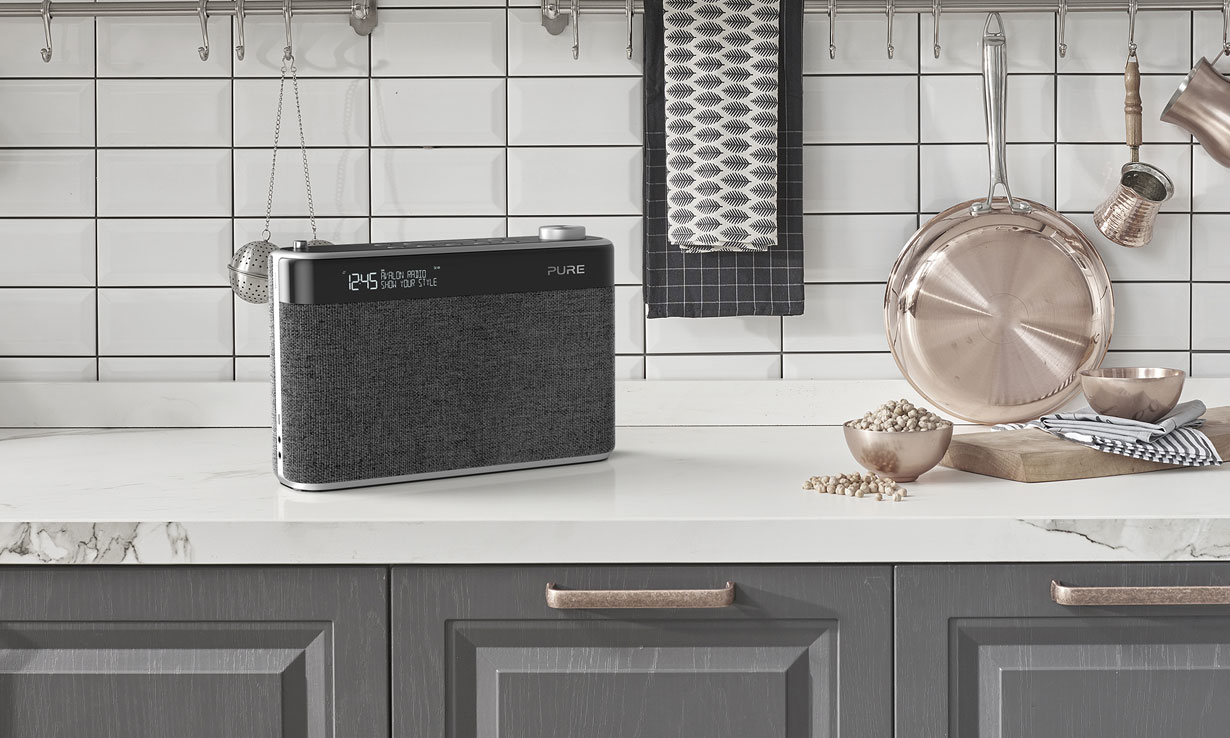 The Pure Avalon N5 intuitively looks like a portable radio with its slimline design, but you need to purchase the separate Pure ChargePAK F1 to use it away from the mains – and this costs an extra £38, more than a third of the price of the entire radio.

The Avalon N5 is a DAB+/FM radio with Bluetooth and four direct-access preset buttons for quick access to your favourite radio stations. You can store a total of 20 presets in the full presets list.

It also has an alarm with sleep function when you need an extra forty winks, plus a kitchen timer, headphones socket and aux input if you’d like to connect other devices by a wire such as an MP3 player.

But is the sound quality up to scratch? Our lab tests and expert listening panel uncover the truth in our Pure Avalon N5 review. 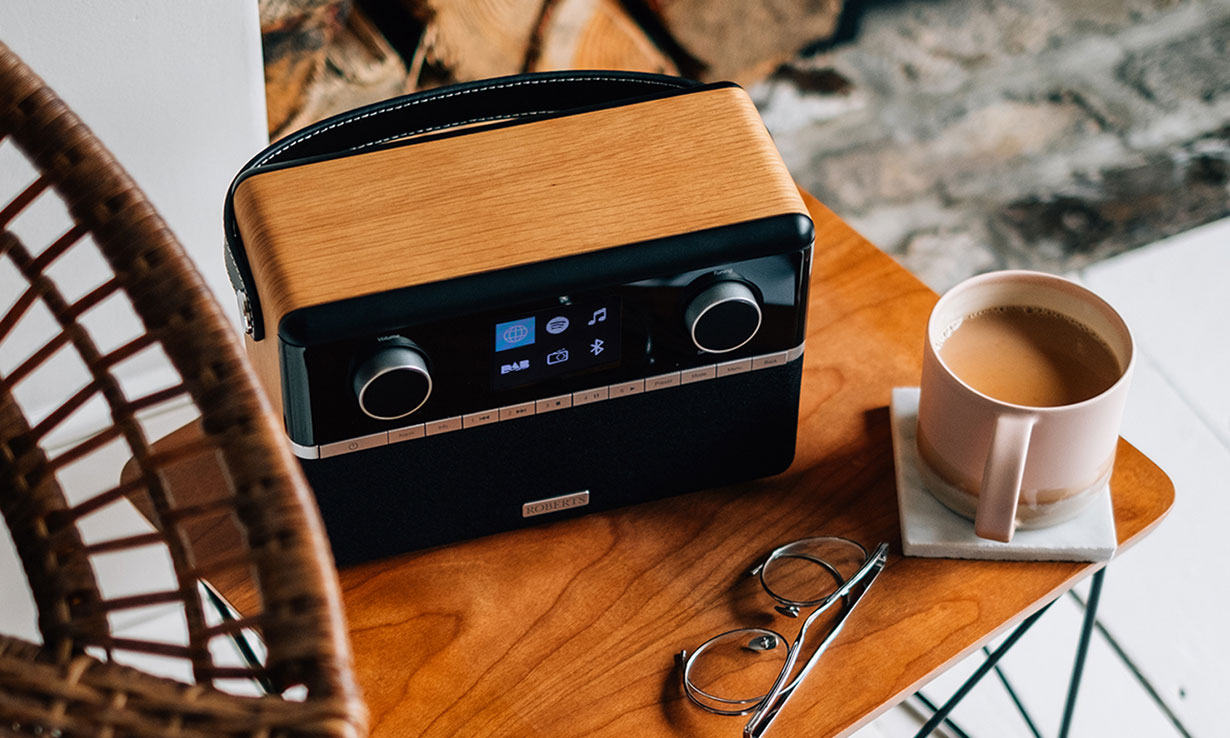 Thankfully, Roberts doesn’t have many radios with battery packs sold separately and not included. However, it does apply to its high-end Roberts Stream 94i internet radio, and here the optional battery pack is even more expensive than Pure’s battery packs.

The required Roberts BP93I resembles a laptop battery pack and costs a whopping £45, a tough pill to swallow when the radio is already one of the most expensive on the market.

But there are signs it might be worth it. The all-bells-and-whistles Roberts Stream 94i DAB+/FM/internet stereo radio is packed with features, including Bluetooth wireless speaker functionality to play music from your smartphone, computer or network NAS drive. It includes a handy remote control to use it from a distance, and has dual independent alarms with sleep and snooze functions, plus a generous 120 presets for quick access to your favourite radio stations.

However, does the sound quality make all this worth it? Find out in our Roberts Stream 94i review. 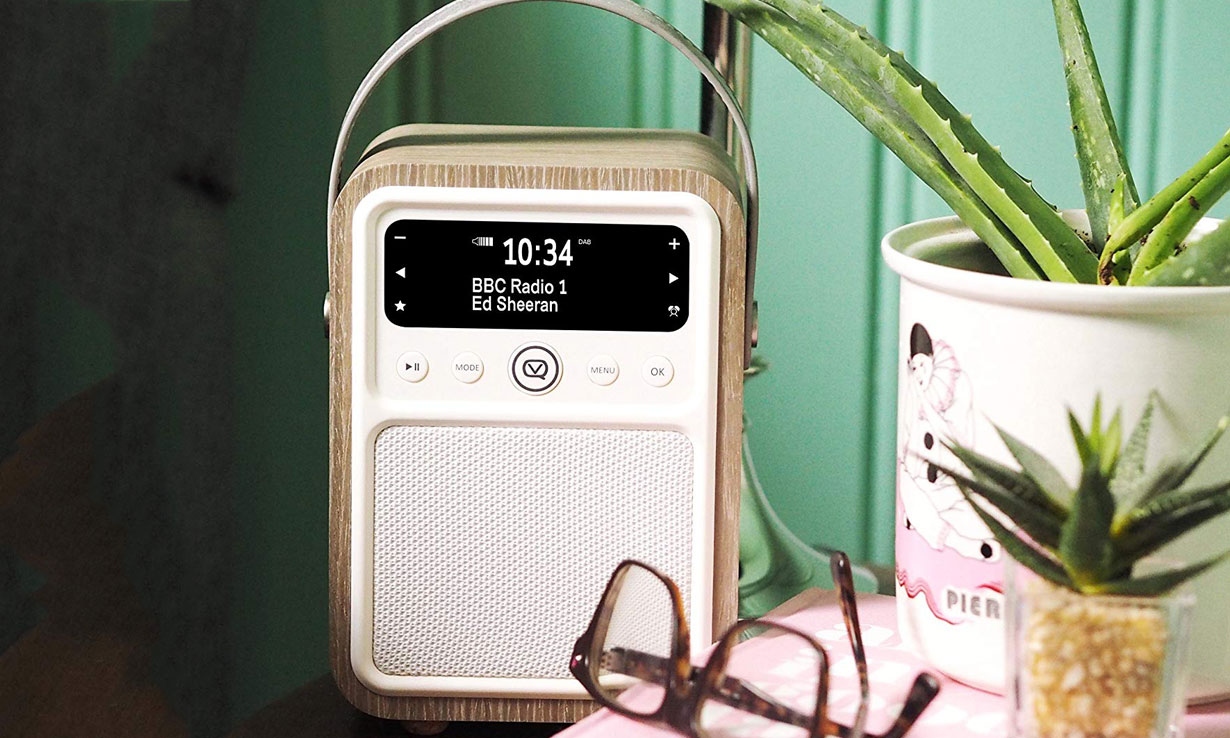 Popular brand VQ’s radio battery packs are much cheaper than its Pure and Roberts rivals, all costing £20. Its radios with separate battery packs also tend to be cheaper, so VQ comes off better here, too.

The VQ Monty is a compact DAB+/FM radio with a handy carry strap and an alarm with snooze function. Bluetooth allows you to stream audio from your smartphone through the radio’s speaker and the stylish wood finish gives the radio an air of quality with its large display.

Could this be the ideal radio you’ve been looking for? See whether it’s worth a look in our VQ Monty review. 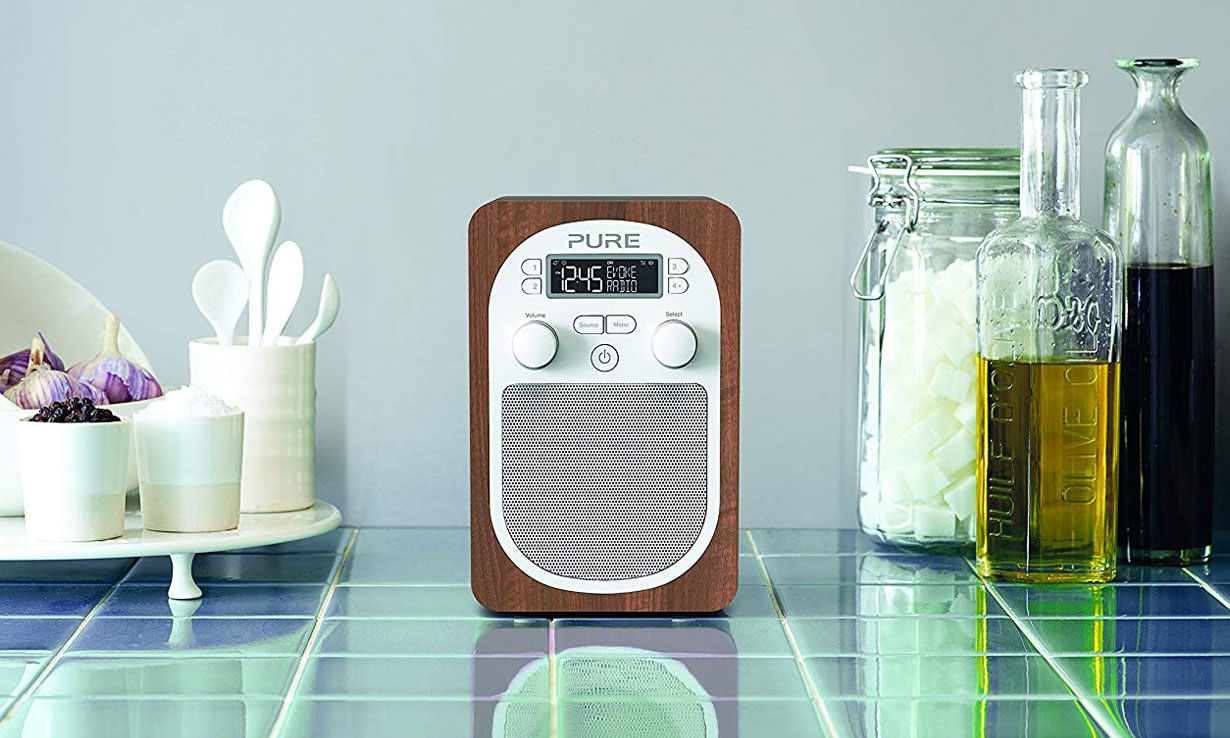 The compact Pure Evoke H2 looks pretty similar to the VQ Monty, and looks like it costs the same – but it’s actually £10 more expensive if you want the battery pack. The Evoke H2 also doesn’t support Bluetooth like the VQ Monty does, making it an even harder sell.

What you do get is an incredibly good wooden build quality for a radio, plus 20 presets and four direct-access buttons for quick access to your favourite stations. There’s also an alarm with snooze and sleep functionality, which means you can listen as you drift off to sleep.

So is it worth paying more for the Pure Evoke H2? Our experts give you the definitive answer in our Pure Evoke H2 review. 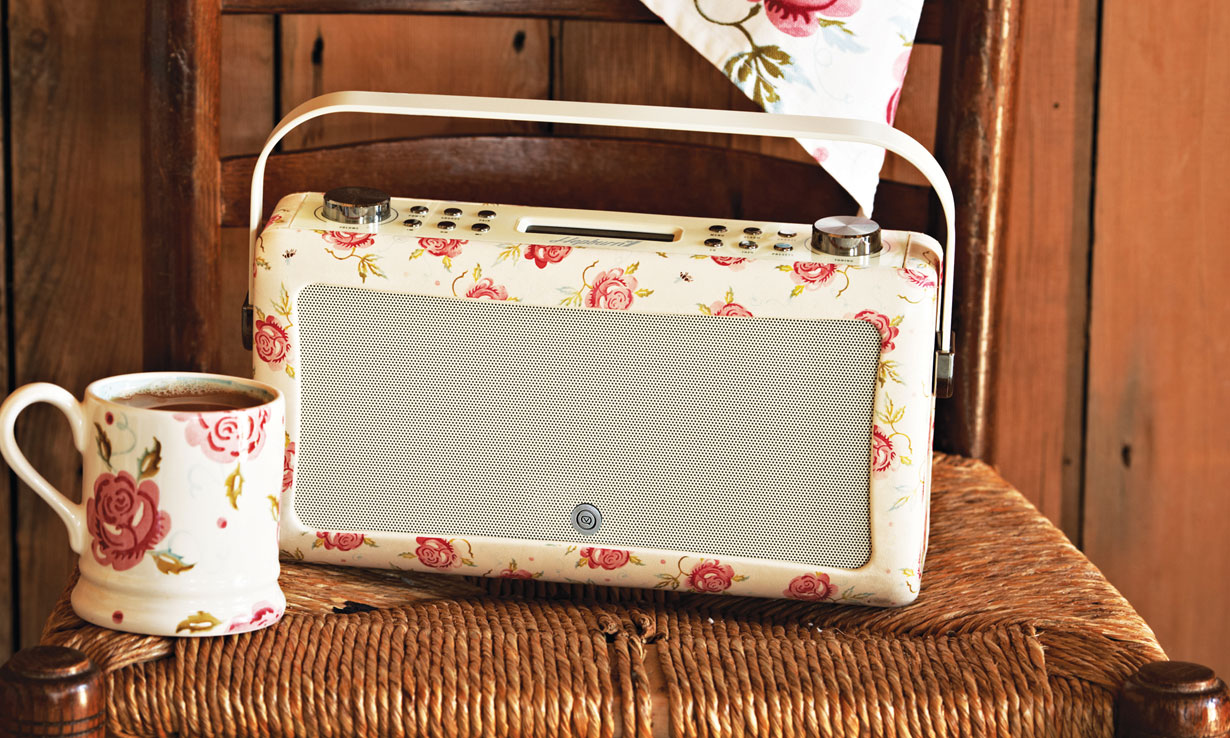 Looking for a retro-styled radio that’s easy to carry around? The VQ Hepburn Mk II looks like a blast from the past, but is updated with modern features like Bluetooth so you can access audio and music streaming services like Spotify via your smartphone (may require subscriptions).

It has traditional rotary dial knob controls on its top that look easy to use, and there’s even a built-in sound equaliser that allows you to adjust the sound quality to your personal preferences by changing the levels of treble and bass.

VQ doesn’t make a big deal about the sold-separately battery pack for the VQ Hepburn Mk II on its website –  it’s clearly shown as an extra purchase with the price when you buy.

However, it could well not be as clear if you buy from a high street retailer, and many would assume a very portable-looking radio such as this would have the battery included, or allow you to run it off standard batteries. And if you went to VQ’s website to try to confirm, it only says the rechargeable battery is ‘optional’, rather than that it’s not included in the box. It could be clearer.

Available in a wide range of colours and patterns, including Laura Ashley prints, could this be the star radio for your home? We reveal all the answers in our definitive VQ Hepburn Mk II review.

Want to check out more radios? See all our expert radio reviews.