Buggy boards, also known as stroller platforms, are an ingenious invention that enables you to transport two children with one pushchair, without having to shell out for a double buggy or navigate one through crowded spaces.

Most buggy boards are suitable for children aged two to five years, and they can be a seat, a bench or a platform for your older child to stand on while your youngest sits in the pushchair.

Typically, buggy boards are a separately sold accessory that you attach to your pushchair, but some pushchairs have them cleverly integrated, which means you get the benefits with no extra cost or hassle.

We’ve rounded up a selection of top pushchairs with integrated buggy boards as well as those that sell a compatible buggy board attachment, so you can see which setup works best for you.

Or jump to our best pushchairs roundup to narrow down your selection to those buggies that most impressed in our rigorous tests. 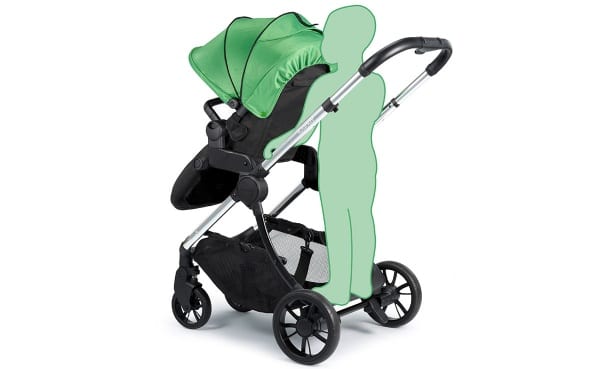 The newest pushchair from iCandy has a useful built-in ride-on platform for older children to stand on.

As with other integrated buggy boards, it means you avoid the hassle and expense of an additional attachment that can get in the way of your feet.

The Lime is suitable from birth in carrycot mode, and the seat unit is suitable for children from six months up to 25kg, which is around six years old.

The integrated ride-on platform for older siblings holds up to 20kg, so it can be used from 18 months to two years, until your child reaches roughly five years old.

Read our iCandy Lime review to find out what other interesting design features caught our eye and whether our pushchair experts discovered anything surprising. 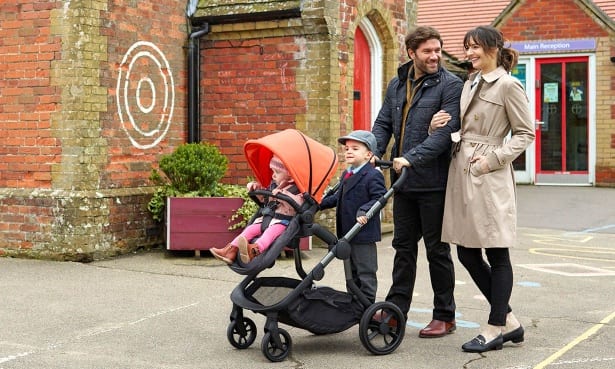 The Lime isn’t the first iCandy pushchair to incorporate a ride-on platform.

That honour goes to the iCandy Orange, which was first launched in 2017 and updated in 2019.

The ride-on platforms on the Lime and Orange look identical and they have the same weight limit, but the Orange is a convertible pushchair, so it can be adapted from a single into a double buggy by buying another seat unit or carrycot.

This means the Orange can accommodate two children in a variety of different configurations, as both seats are reversible and can be swapped for a car seat or carrycot.

Take a look at our iCandy Orange review to see how easy it is to do this and how it fared on our specially designed obstacle course, which includes pavements, bumpy grass, stairs and kerbs. 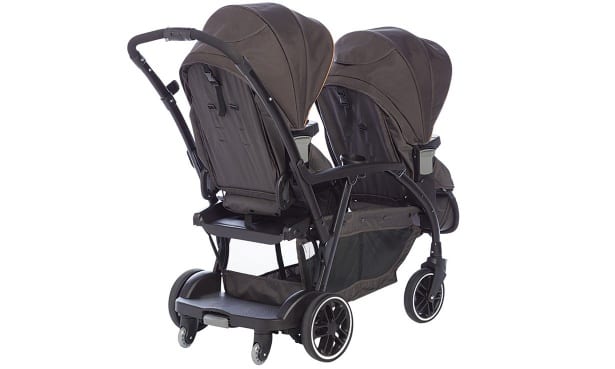 The Graco Modes Duo is a unique double buggy with the option of using a standing platform or a bench seat instead of one of the seat units or an infant car seat.

The two seat units are suitable from birth to 15kg, which is about three years old, and they are reversible too, so your babies can face you or the world.

The platform and bench seat are suited to older children who have outgrown the seat, as they can hold up to 20kg.

On paper, the Modes Duo looks like a very flexible buggy with its 27 different configurations. Read our Graco Modes Duo review to find out whether it is easy to use and if there is anything you should watch out for. 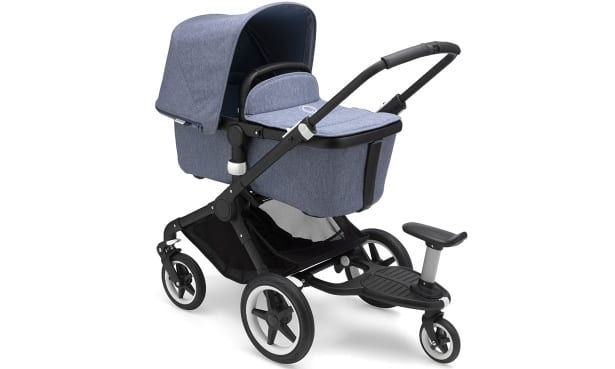 The Bugaboo Comfort Wheeled Board (£90) can attach to all Bugaboo pushchairs, including the bestselling Bugaboo Fox 2.

But the different pushchairs have different connectors, so you need to make sure you buy the compatible board for your pushchair.

According to parents, it’s easy to attach and your child can sit on the bike saddle-style seat or stand if they’d prefer.

Plus the unusual flexible positioning of the Comfort Wheeled Board means you can set it left or right from centre.

This ingeniously creates extra walking space, so you don’t have to adjust your stride to avoid accidentally kicking it.

The Bugaboo Fox and Comfort Wheeled Board aren’t cheap, though. If you’re tempted to invest, make sure to check out our Bugaboo Fox 2 review to see if it’s worth it. 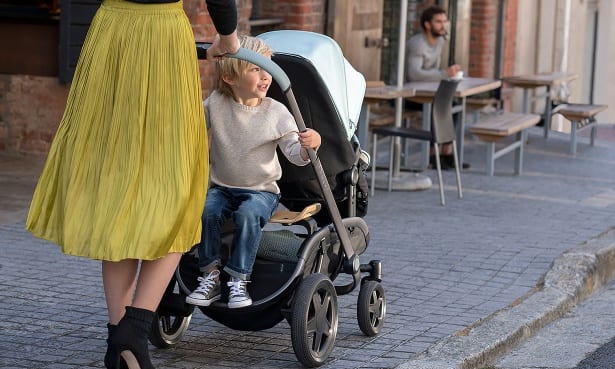 The Quinny Hubb is another flexible convertible pushchair that can accommodate one or two seats, carrycots or infant car seats.

If there’s an age gap between your children and one child weighs more than 15kg, which is usually around three years old, you can remove one of the seats and attach the Quinny Hubb Hop-on Board (£59) instead.

It’s a bench-type seat made from bamboo and it has a natural wood finish, unlike most buggy boards, which tend to be made from black plastic.

As the Hop-on Board attaches to the frame of the extra-large shopping basket, it’s not in the way and you won’t need to worry about kicking it as you walk. 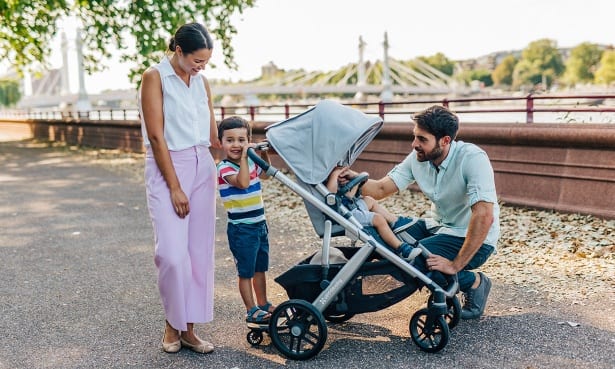 Uppababy sells a Piggyback Ride Along Board (£120) for its bestselling Vista pushchair, and another one compatible with the Uppababy Cruz.

The Vista can be adapted to take one or two seats, suitable up to 15kg, which is roughly three years old.

The buggy board has a useful 22kg weight limit, which means it can be used until your child reaches about five or six years old.

When not in use, it can be lifted out of the way without the need to detach it from the pushchair frame.

Uppababy says these ride-along boards are made from eco-friendly wood, with a non-slip surface on top.

Handily, you can fold the Vista with the Piggyback Ride Along Board still attached, which isn’t always the case with buggy-board accessories.