If you’re looking for a cheap tumble dryer, the two most popular brands are Beko and White Knight. But which brand should you choose?

We’ve currently have 17 Beko tumble dryers and 11 White Knight tumble dryer reviews for you to shop from. But our testing highlights clear differences between the two popular tumble dryer brands.

Go to our tumble dryer reviews to compare all the models we’ve put through our thorough laboratory tests.

Which tumble dryer brand scores best in our tests? 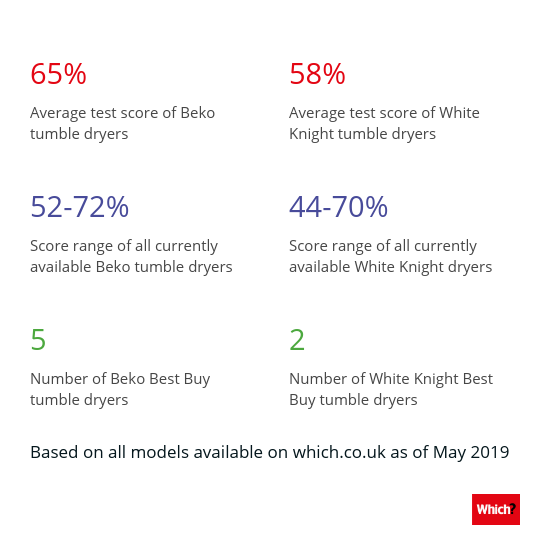 Our testing shows that, of the two budget brands, Beko tumble dryers tend to be better at drying clothes.

Beko dryers have a higher average test score and more models than White Knight are good enough to be named among the best tumble dryers.

But we’ve also found disappointing models from both brands.

Find out which is the best tumble dryer brand.

We’ve found tumble dryers from Blomberg and Hoover that do a smashing job of drying clothes at a budget price.

How do they compare on features? 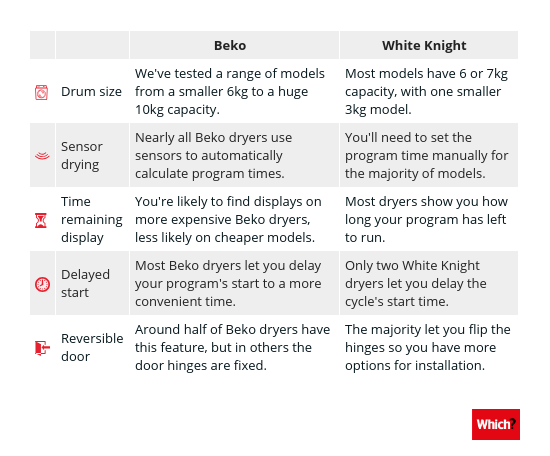 However, you’ll still be able to get useful features such as delay start, time remaining displays and sensor drying depending on which of the two brands you choose and the model.

For example, nearly all Beko tumble dryers we’ve tested use sensors to automatically calculate how long your dryer needs to run for depending on the load.

Beko vs White Knight: which is cheapest? 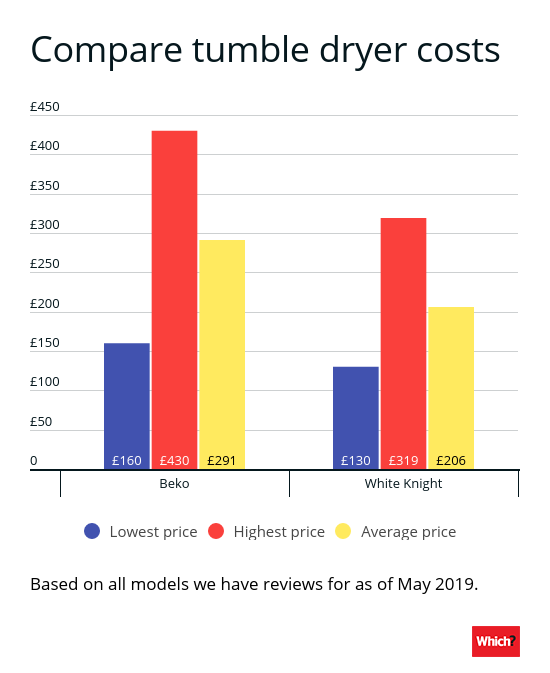 Based on the models we’ve tested, White Knight tumble dryers tend to be cheaper, with the average dryer costing £85 less than a Beko model.

However, you can also buy an inexpensive Beko tumble dryer. At £160, its cheapest model costs considerably less than many equivalent White Knight dryers.

If price is your most important concern, head straight to our round-up of the top five cheap tumble dryers to buy in 2019.

What about running costs? 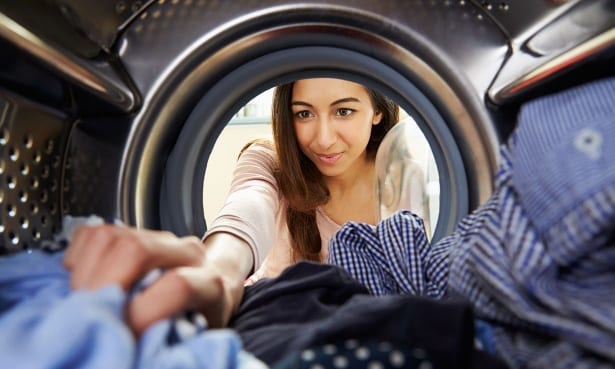 How economical your tumble dryer will be depends on whether it’s a condenser, vented, heat pump or gas tumble dryer.

We’ve tested a number of Beko condenser tumble dryers, which are typically a more expensive tumble dryer type to run – the most expensive on running costs adds a whopping £114 per year to your bills.

We’ve also tested seven Beko heat pump tumble dryers. The most conservative of these for running costs adds up to around £33 per year.

The majority of White Knight dryers we’ve tested are vented. Vented tumble dryer use a hose to vent the air away, rather than turning the hot air into water and storing it in a tank within the dryer.

Vented tumble dryers are slightly cheaper to run than condenser dryers – the most expensive costs £82 per year.

You can enjoy even lower running costs with the White Knight gas tumble dryer we’ve tested – as low as £32 per year. Bear in mind, though, that it will need to be installed by a certified Gas Safe engineer.

Choosing an eco-friendly tumble dryer? See our round-up of the top five  energy-efficient tumble dryers for 2019.