It seems no internet-connected device is safe from viruses and malware, including TVs.

In a tweet posted on its Samsung Support USA twitter account, Samsung urged owners of its top-of-the-range QLED TVs to scan ‘every few weeks’ in order to ‘prevent malicious software attacks’.

The tweet, which also included a video demonstrating how to go about scanning a TV for viruses, has since been deleted – but not before the video was watched more than 200,000 times. 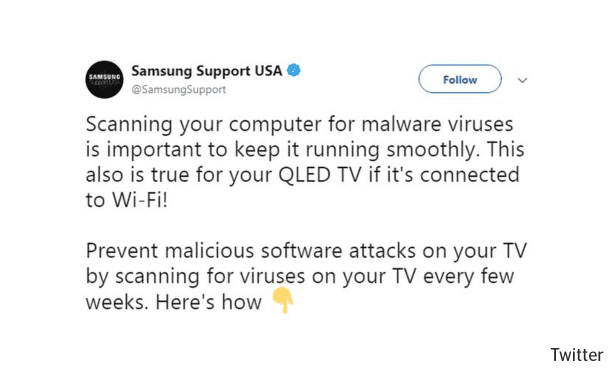 Find out more about smart internet-connected TVs, and see the models we recommend in our guide to smart TVs.

Good advice or a waste of time?

The fact that Samsung has now deleted the tweet means it’s possible that it was only posting the advice as a precaution to its customers. But when a company the size of Samsung – one of the biggest TV manufacturers in the world – recommends to scan for viruses, it’s easy to assume the worst.

It doesn’t appear that the video was posted in response to any specific attack, but major tech companies have a history of releasing information on major data leaks and hacks when they are good and ready.

There isn’t any harm in scanning any internet-connected device for viruses. Computers are far more likely to be at risk than TVs, though.

Should you connect your TV to the internet?

The simplest way to avoid getting a virus on any device is to not connect it to the internet at all. But in most cases this will greatly impact how you use it.

TVs rely on an internet connection for all of their smart functionality. You won’t be able to access streaming apps such as iPlayer and Netflix, use Freeview Play or YouView, and the TV won’t receive updates which add new features, and, ironically, improve the security of the device.

You’ll still be able to watch Freeview broadcasts on a Samsung TV if you don’t connect it to the internet.

The latest Samsung QLEDs on test

With many new QLED sets recently launched, Samsung’s tweet hasn’t come at a good time. It’s unlikely to want its best TVs to be associated with viruses, which could be why the tweet was so swiftly deleted.

See all our QLED reviews to see which we think are worth owning.