Whirlpool has today launched a recall for what some estimates have put at up to 800,000 fire-risk tumble dryers.

The tumble dryers in question need to be replaced or modified following a 2015 fire safety alert.

This action comes more than three-and-a-half years after Whirlpool first admitted that it had a fire problem with vented and condenser dryers, branded Hotpoint, Indesit, Creda, Swan and Proline, made between April 2004 and October 2015.

As part of the recall, worried owners of unmodified dryers that are affected by the safety alert can receive free replacement models, have their machines modified, buy a discounted new model or receive a refund that will be based on the age of the dryer.

The safety alert issued by Whirlpool notes that the affected dryers pose a safety risk if not modified or replaced and says that anyone with an affected dryer must unplug and stop using it.

The recall allows owners of affected fire-risk dryers four options, which are:

Consumers can choose between a free new vented or condenser dryer provided by Whirlpool.

The company will also take your old machine away for free as part of the deal.

Whirlpool will send an engineer to your home to modify your machine.

Whirlpool tells us that appointments take an hour and can be booked throughout the day, including evenings and weekends.

The manufacturer will also provide upgrades at a reduced price – £59 for vented dryers and £99 for condensers.

Removal of your old machine will be free.

There are 10 models available to choose from as part of this option, including machines that sell for more than £300.

The final option available to consumers with dangerous dryers in their homes is to go for a refund.

The most Whirlpool will provide you with is £150 and this will be for the newest dryers affected by the safety alert. We believe this will be those made in or around 2015.

Older dryers will accrue less in terms of refund value for owners. But as part of this deal, Whirlpool will again collect and recycle your old dryer.

Check if your tumble dryer is at risk

You can use our list below to check if your model is one of those at risk. But you’ll need to contact Whirlpool on 0800 151 0905 or by going to whirlpool.co.uk/dryerrecall.

Consumers whose dryers have already been replaced or modified by Whirlpool need take no further action. 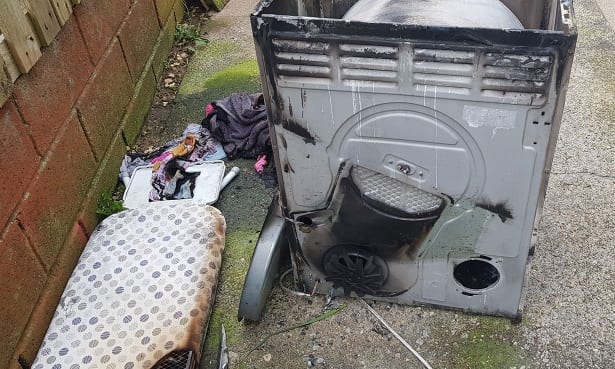 The full recall of dangerous Whirlpool dryers (branded Hotpoint, Indesit, Creda, Swan and Proline) comes two weeks on from the manufacturer naming for the first time all 627 models of tumble dryer which pose a fire risk.

We now believe 300 of these models were available for sale in the UK.

Which? has been calling for Whirlpool to name the dangerous tumble dryers since 2015. At that time Whirlpool was still advising owners to carry on drying using machines it had acknowledged could pose a safety risk.

It took threats of legal action from Which? before Trading Standards advised Whirlpool to tell owners to not use their dangerous dryers until they had been modified.

Which? has previously reported more than 30 cases of tumble dryers that have previously been modified by Whirlpool catching fire, producing smoke or smelling of burning.

Caroline Normand, Which? director of advocacy, said: ‘Whirlpool has failed to trace hundreds of thousands of fire-risk tumble dryers that could still be in people’s homes almost four years after this fault was first discovered, so we have serious doubts about the company’s ability to get these machines out of circulation now.

‘Given it has taken the threat of government action for Whirlpool to act on this vital matter of public safety, ministers must closely monitor this recall and definitively establish the safety of modified machines, which have also caught fire, if they are to be offered as replacements.

‘If Whirlpool’s approach is found wanting then the secretary of state must step in and ensure that all potentially dangerous machines are immediately removed from people’s homes.’