One in six Which? members who bought additional insurance at the car rental desk told us they did so because they felt under pressure or were lied to.

Some already had insurance, but were so intimidated by the agents’ threats that they bought another policy at the rental desk.

Pressure selling is illegal throughout the EU, yet Which? has received complaints about all the major providers using misleading or aggressive tactics to sell extra insurance.

By far the worst offender is Goldcar. So Which? Travel sent mystery shoppers armed with secret cameras to see just how far its agents will go to make a sale.

Never rent from Goldcar. Find out which car hire companies we recommend

Lies and bullying caught on camera

Which? Travel journalists went undercover in Malaga and Alicante to catch Goldcar breaking the law:

1. ‘If you don’t buy our insurance, you’re only covered for third-party damage’

Goldcar told us we were covered for damage to any other car we hit, but not the hire car itself. But Goldcar’s own T&Cs reveal that rental rates include compulsory basic insurance covering the vehicle for any collision, theft, fire and vandalism, with an excess.

2. If you break down, you won’t have any roadside assistance (unless you take our insurance)

Goldcar said we’d have to pay for any assistance, including €8.50 for every kilometre a tow truck travelled. In fact, customers only pay where the breakdown is deemed to be their fault. Customers are not liable for expenses caused by the mechanical failure of the vehicle.

Goldcar told us it didn’t work with any other insurance companies. It’s true that the rental company has no relationship with the insurer, but your insurance is perfectly valid, whichever company you buy it from.

If you cause damage to the vehicle, you pay the rental company’s bill and then make an insurance claim.

4. Your own insurance will only refund you the deposit. You’re responsible for any damage to the car

5. Unless you take our insurance, you can’t take the car

While we didn’t catch this on camera, several Goldcar customers told us that they were forced into buying insurance or forgoing their prepaid hire.

Never accept this. Excess waiver insurance at the rental desk is always optional in Europe.

1. If you don’t take our insurance, you’ll have to leave a huge deposit

As a rule of thumb, the cheaper the hire, the bigger the deposit. We’ve seen them as high as £2,500. This is a tactic used to scare you into taking its insurance.

2. If you come back with even a tiny scratch, you will pay through the nose

Goldcar threatened to charge us at least €300 for a tiny scratch, even if it wasn’t our fault. Avoid Goldcar for this, and many other reasons, and make sure you have your own insurance.

3. It’s a huge hassle to make a claim with your own insurance

Goldcar exaggerated the difficulty of making a claim, even telling us, incorrectly, that we’d have to get the paperwork translated into English.

While you will need a few documents (eg the rental agreement and a copy of the damage report) making a claim is relatively simple, and you will typically be reimbursed within 21 days.

When you hire a car in Europe, you aren’t required to buy any additional insurance. Basic insurance is, by law, included in the rental. So you’ll never be liable for the entire cost of the car if it’s stolen, set on fire or written off.

But you will have to pay the first part of any claim – the excess.

To avoid paying the excess you can either buy a reimbursement policy online or an excess waiver from the car rental company.

We found that car hire company waivers are usually a rip-off, offering inferior cover at, on average, five times the price of an online policy.

Find out which companies offer the best car hire insurance 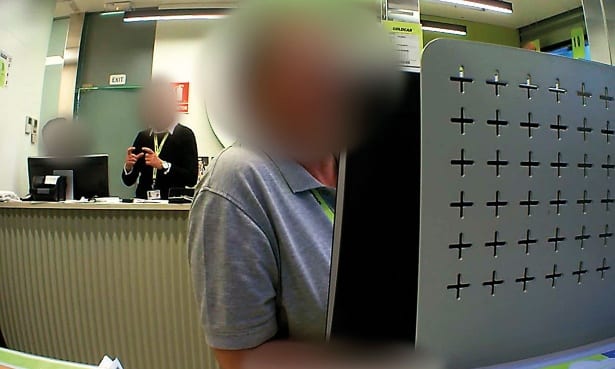 Having lured you in with a low price, car hire providers are desperate to sell you their insurance.

Those arriving after a long flight, laden with luggage and with exhausted families in tow are particularly vulnerable to the hard sell.

Which? reader John Davies reported being fed the following lines by the Goldcar agent when he arrived in Sardinia, to try and get him to buy extra insurance:

Mark Dearden hired with Interrent (Goldcar’s sister company). He told Which? Travel: ‘It said I could be charged £3,000 if the car was damaged and that my own policy would only refund me £800. This was a lie. They also said that, with current civil unrest in France, damage to the car was likely.

‘I was frightened by the agent’s confident warnings and agreed to pay three times the amount.’

Under the Consumer Protection from Unfair Trading Regulations (CPRs), it’s a criminal offence to use either misleading or aggressive practices that lead consumers to make purchases they otherwise would not have made.

In our secret filming, and in both locations, Goldcar was guilty of using both.

Which? Travel has presented its evidence to the Competition and Markets Authority and urged it to crack down on the systematic use of aggressive and misleading sales practices.

Goldcar told us: ‘In February, we announced a programme of large-scale change to ensure a good customer experience.

‘Goldcar would never condone the use of misleading statements that are not aligned with our terms and conditions. Where we find unaligned practice we will take firm action.’

How to avoid the hard sell

There are several steps you can take to avoid having to endure pressure selling at the car rental desk:

Is it safe to book a holiday to Spain?