Customers of the app-based bank Monzo can now choose to receive their salaries a day early.

Monzo has today launched its ‘Get Paid Early’ feature, which enables account holders to opt in to having Bacs payments cleared in their account at 4pm the day before they’re due to be paid.

Here, we explain how the new feature will work, and offer advice on whether you should go ‘full Monzo’.

Monzo customers can now choose to have their salaries paid at 4pm the day before they’re due, effectively offering them an advance of at least eight hours.

The new feature will be provided free of charge to all customers.

Monzo says more than 90% of the UK’s population is paid by Bacs, and that all such payments, including things like student loans and tax credits, will be included.

The popular challenger bank claims that all banks could theoretically offer this service as money comes into the system a day early, but most choose not to.

The feature has been in testing for a while, with a handful of customers receiving notifications in their apps in June. The move comes almost exactly a year after Monzo started showing customers their upcoming payments within the app. 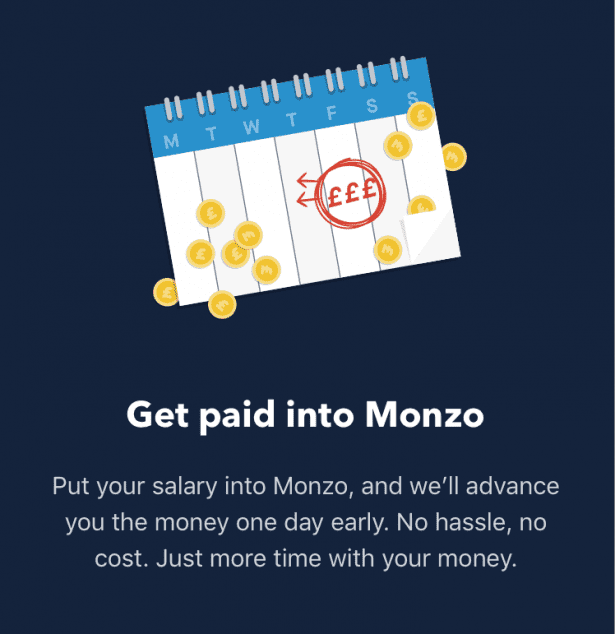 How will Get Paid Early work?

As shown in the image below, customers will be given an in-app notification telling them that their money is available and inviting them to tap their screen to get paid immediately rather than waiting until midnight or beyond.

The system will work on a per-payment basis, so if you choose to get your salary early this month, it won’t automatically happen next month.

It’s also not possible to request a part-payment, so if your salary is £1,500, you’ll need to take the whole amount in one go. 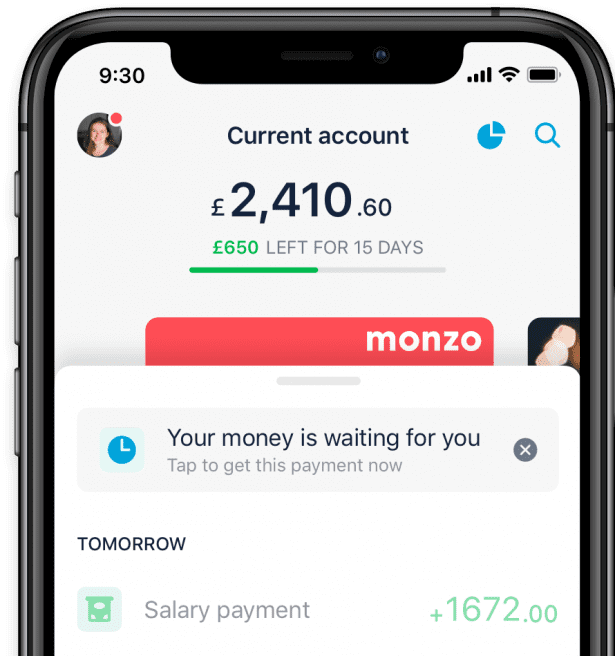 Could payments bounce after they’ve been sent?

We asked Monzo what happens if there’s an issue with a payment after a customer has claimed it.

A spokesperson told Which? that Monzo would know before 4pm if there was a problem at the sender’s side.

If a wider banking problem was discovered after 4pm – such as a bank having a major issue and needing to delay all of its Bacs payments – Monzo says it would reverse the payment and let the customer know. It stresses that such a scenario would be ‘extremely rare’.

Ultimately, the challenger bank says it is attempting to give customers better control over their finances, and that it doesn’t want to hold onto their money any longer than is necessary.

Why is Monzo launching this feature?

Many people who use Monzo don’t have their salary paid into their account, instead choosing to use Monzo as a secondary bank for things like additional spending or savings.

This move could see more existing customers go ‘full Monzo’ and switch their banking entirely, in the knowledge they can access the money a little earlier.

In truth, for many customers this feature simply means getting your hands on your salary just eight hours before you usually would, so while it’s innovative, it might not be enough to make non-Monzo customers switch their current accounts, especially given the lack of switching incentives offered by the challenger bank.

Should you switch to Monzo?

Along with other app-based banks such as Starling Bank, Monzo has been becoming increasingly popular with consumers over the last couple of years, and now boasts more than two million account holders.

And in our banking satisfaction survey earlier this year, it received the highest customer score (86%) and gained Which? Recommended Provider status for the first time.

The bank has been developing its offering throughout the year, launching savings accounts in March, a mortgage partnership in July and loans earlier this month.

Things haven’t gone entirely swimmingly, however. At the start of this month, Monzo encouraged 480,000 customers to change their Pins after personal information was accidentally exposed to more than 100 staff members.