As we’re becoming more and more aware of the dangers of air pollution, we’re seeing more pieces of tech promising to help you protect yourself from it. Can a wearable air quality monitor give you more control over the air you’re breathing?

Air pollution is the top environmental risk to human health in the UK, and the fourth greatest threat to public health after cancer, heart disease and obesity, according to charity Allergy UK.

Working in Central London, I’d vaguely reconciled myself to the fact that I’m going to be breathing dangerously polluted air most days for the rest of my life. Is exposure to air pollution inevitable, though, or is there anything you can do about it?

That’s the question we’ve been trying to answer at Which? as we embark on trying out a series of air quality monitors. Read on to find out all about the Atmotube Pro.

If you want to clean the air in your home, see our reviews of the best air purifiers

What is the Atmotube Pro?

The Atmotube Pro is similar and marketed as a ‘personal air quality coach’, made by manufacturer NotAnotherOne Inc.

It hooks onto your belt or bag so that you can take it out and about with you, wherever you are. 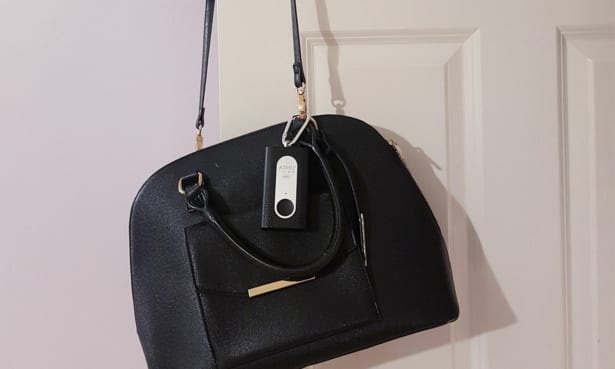 It also measures atmospheric pressure, temperature and humidity, and sends all this data to the Atmotube app on your phone, via Bluetooth.

It also tracks your location (accurately, I found) so that you can review your data to see where in the day you encountered different pollutants.

There’s also an LED on the device itself which will light up in different colours to tell you the current Air Quality Score (AQS) when you press the large round button. So you can see how polluted your immediate vicinity is without you having to get your phone out.

The manufacturer says that your location data is secure, as it’s not connected to any individual user. You can turn this function off if you want, though.

It’s compatible with iOS 9 or later and Android OS 4.3 or later. You can even install the Atmotube app on your Apple Watch and get notifications there, as in the image from NotAnotherOne below. 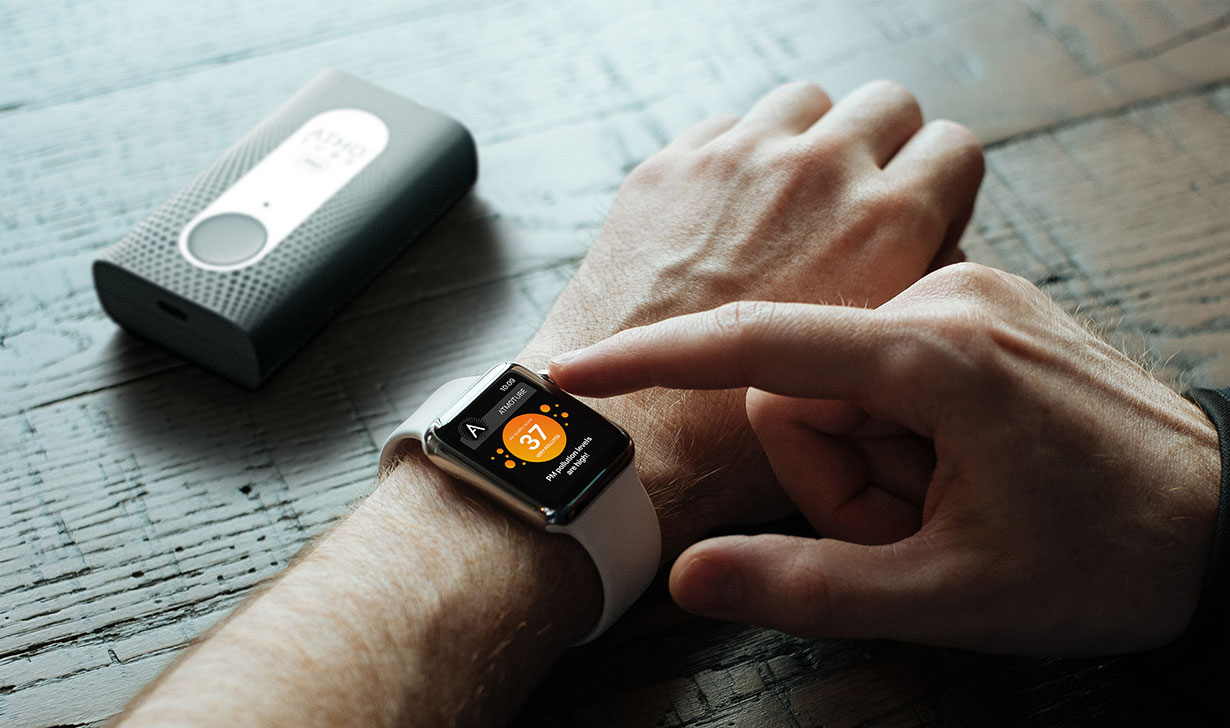 You should avoid getting Atmotube wet, to protect its sensors. We asked the manufacturer whether it could survive a few raindrops, British weather being what it is. NotAnotherOne told us that it’s better not to keep using Atmotube in the rain, but, if you want to, you could use it under an umbrella and clip it to an umbrella stretcher.

I used it for a week, taking it to work with me each day and also using it to monitor the quality of my air at home.

I tried it out on an Android phone, and then a colleague did the same with an iPhone.

Getting Atmotube Pro set up

Both of us found it super easy to use. Even if you’re a technophobe, you shouldn’t have any trouble getting it set up or using it. 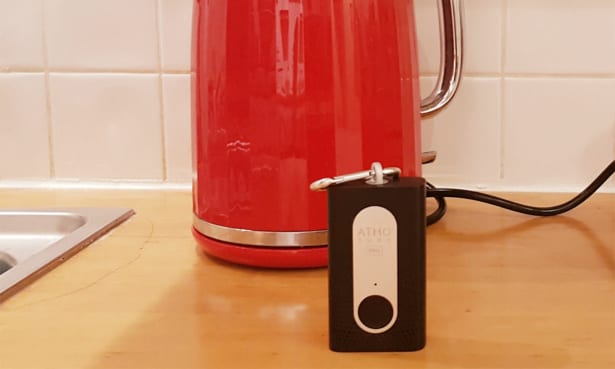 To set up your Atmotube, you charge it for two hours using the cable provided. You’ll know when it’s fully charged because the LED light will change its colour from orange to green.

The first time you turn it on (and if you haven’t used it for a while) the VOC sensor takes three minutes to recalibrate. Measurements will be more accurate after the first 12 hours of use.

The Atmotube app was easy to download and intuitive to use. All the data was nicely presented in an easily digestible format. 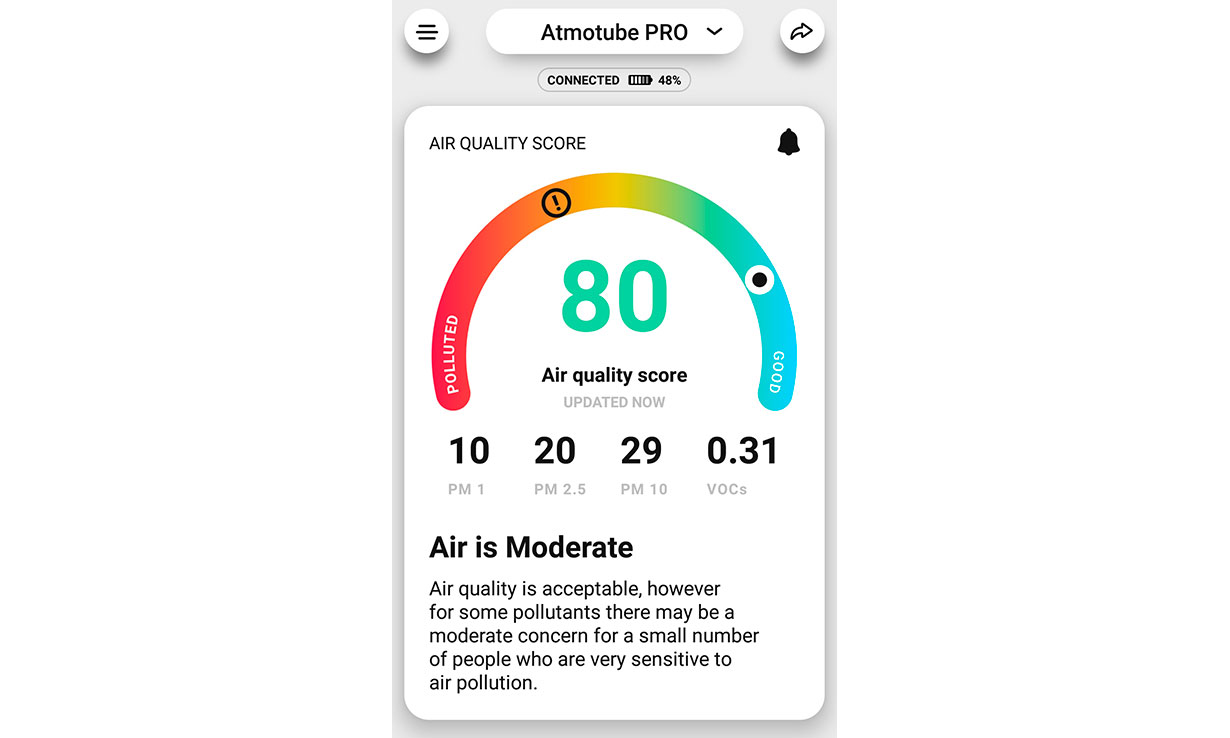 None of the data really took me by surprise. Pollution was consistently high on the tube, for example. Arguably I didn’t need an air quality monitor to tell me this, but it did drive the point home.

It was also high in a beauty salon I visited. Again, that wasn’t a surprise, considering all the products being used, but it certainly was sobering. And it was depressingly bad outside the Which? office. 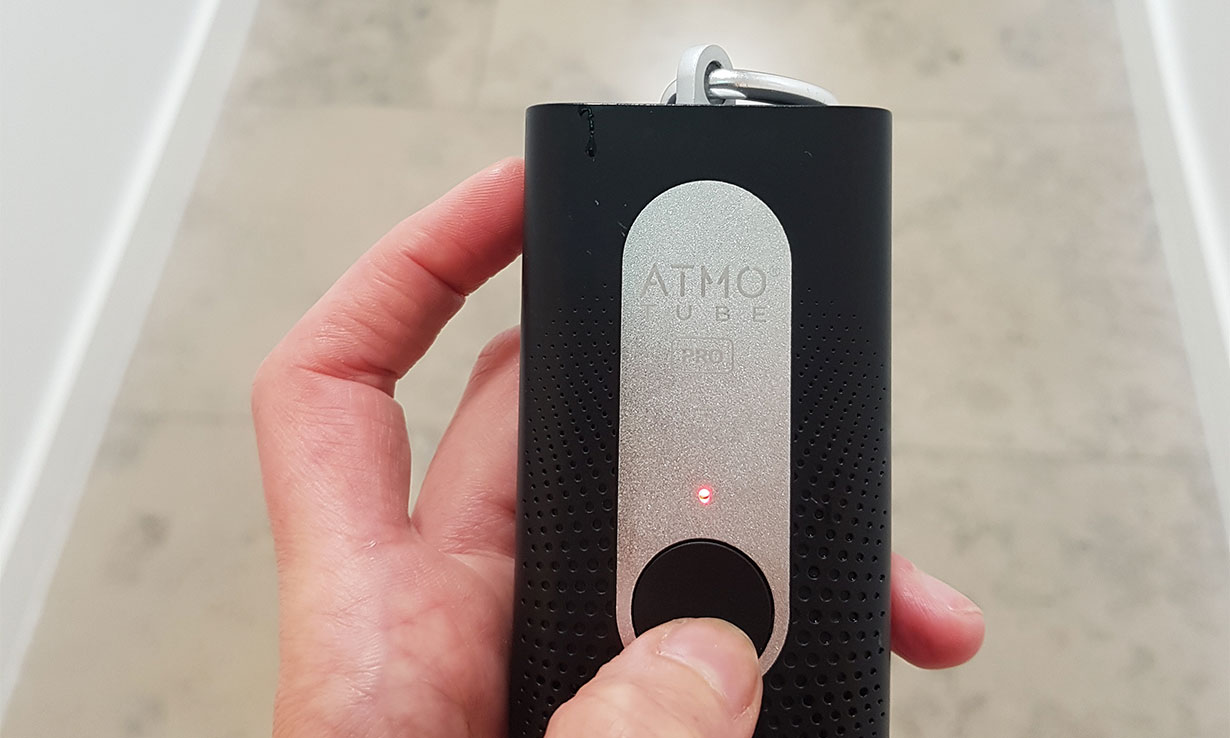 You can set the PM sensor set to work every 10 minutes, five minutes, or even to have it always on. Obviously the harder it’s working, the shorter the battery life.

I’d set the PM sensor to work every 15 minutes, because I didn’t want to be tied into charging it too often, and found it lasted a week, as it was advertised to.

The manufacturer says it will last two and a half days with the PM set to five-minute intervals. I appreciated having the option: some air quality monitors have to be charged daily, which is a bit of a drag.

The app also gives you real-time information on temperature and humidity, and notifies you if the humidity is very high or low.

As it explains, a high barometric pressure leads to pollutants building up, as there’s no wind or rain to disperse pollutants or wash them out. That’s useful information if you suffer from, say, a heart condition which is exacerbated by air pollution.

And, while NotAnotherOne makes clear that Atmotube is not a medical device, it could be useful for you to spot any correlation between weather changes and symptoms such as migraines or joint pains; information which you could then discuss with a doctor.

If the air quality drops below a certain level, and your phone sound is on, you’ll hear an alarm. That happened once – predictably, on the tube – in my colleague’s week of using it.

We rather liked this feature, but if you think it will just stress you out – if it keeps going off in situations that you can’t avoid, for example – then you can adjust the level at which the alarm sounds.

It isn’t all negative, though: there are positive actions you can take. The app gives you practical advice for different circumstances – a feature which I really liked. 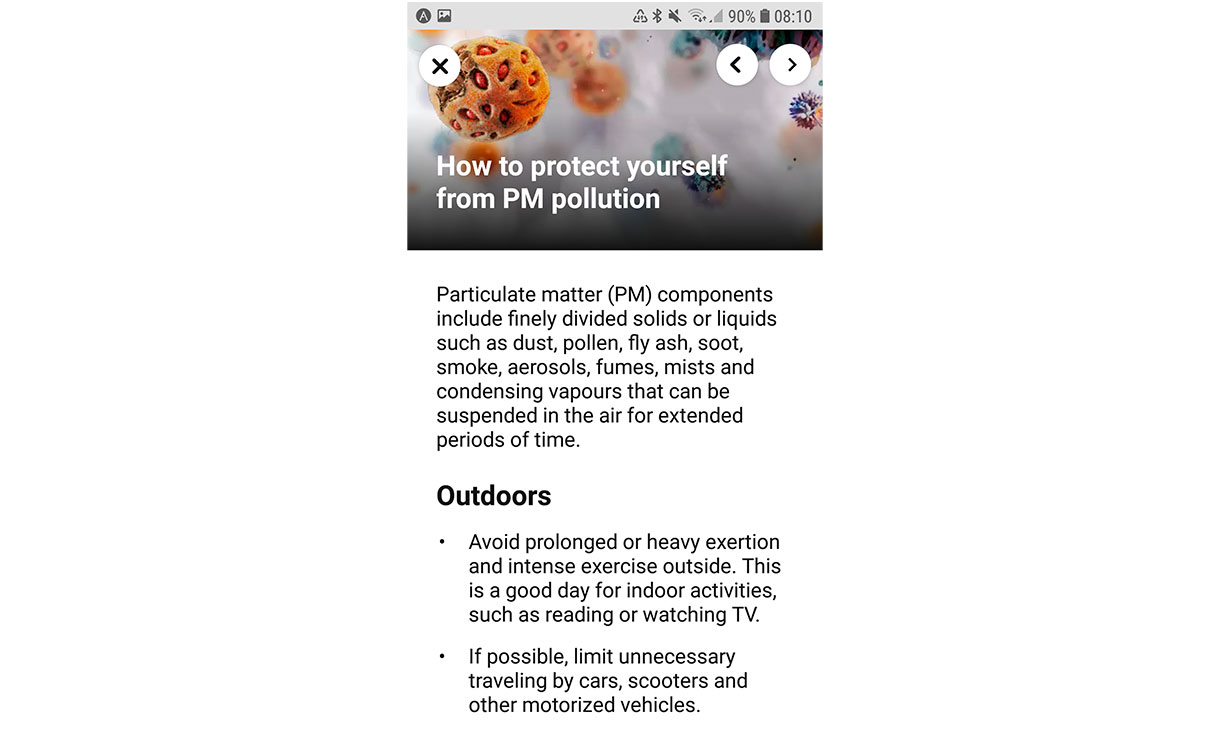 The Atmotube Pro is an updated version of the Atmotube Plus ($99, approximately £80), although it sounds like it should be the other way around.

We haven’t tried the Plus to be able to tell you which is better, but NotAnotherOne says that the Pro has improved sensors and antenna performance. The Plus doesn’t have a PM sensor.

The Pro is fairly small (86mm height x 50mm width x 22mm depth). But it’s not tiny – I can’t imagine actually clipping it to my belt or umbrella. Although it looks cool dangling from a rucksack or satchel, it’s going to overwhelm a little clutch bag.

It also weighs 104g. For comparison, Flow is 70g, and, while that might not sound much less, you will notice the difference. If you already carry a heavy bag with you each day, you might not want this weighing you down further.

The Plus is a tad shorter (66mm height) and only 27g, so it may be worth checking out instead if you want something lighter and more discreet.

Is it worth me buying an air quality monitor? 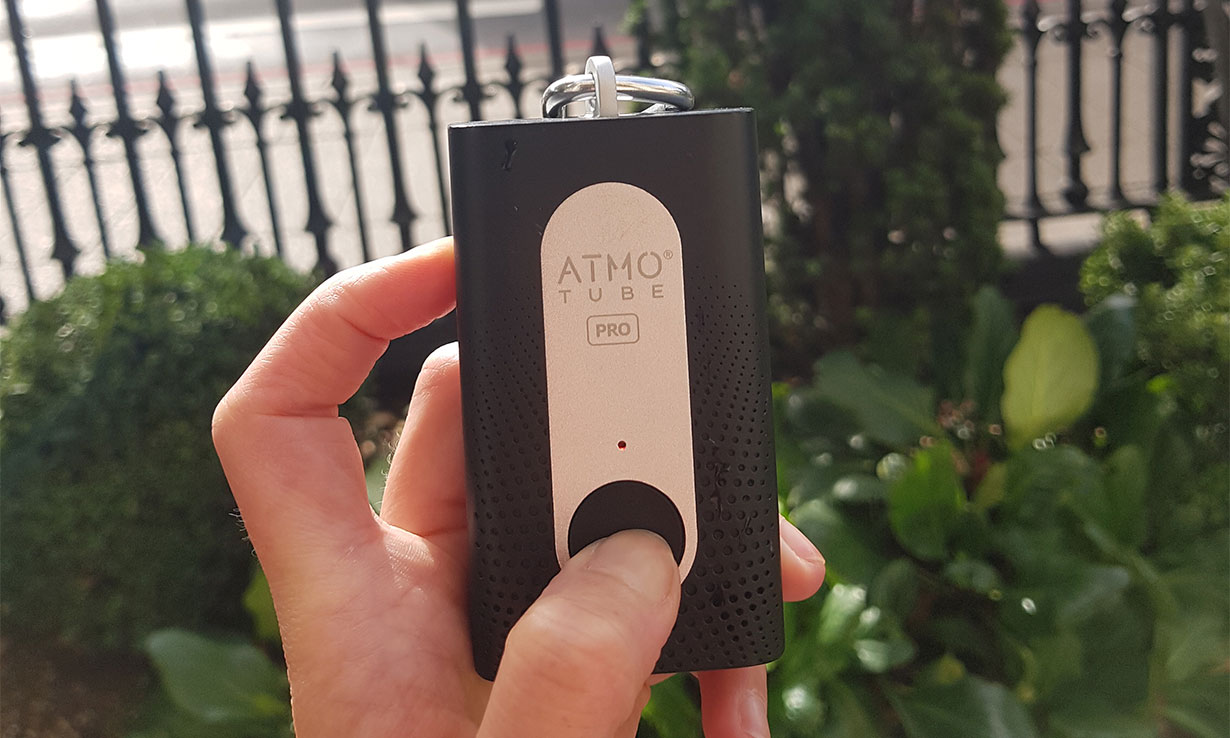 I was really impressed by the Atmotube, and definitely felt it had inspired me to think more carefully about the pollution I’m encountering.

Like most people commuting to an office job, I’m not in a position to make drastic lifestyle changes, but it has made me more conscious of my environment and inspired me to make small changes where I can.

I can’t change the fact that my office is on a polluted street, but I can take a different running route, make fewer car journeys, rethink the cleaning products and toiletries I use at home and head out into the countryside more often on a weekend, for example.

Even when I didn’t have the app open, there was an ever-present notification on my phone screen so that air pollution was never far from my mind.

Realistically, though, it’s only worth buying one if you’re dedicated to making lifestyle changes – or have the flexibility to do so.

If you frequently switch between handbags, you’re going to be constantly unclipping and reclipping it, and there’s a high chance you’ll often just leave it at home, if you’re a very busy person. It may also be futile if you can’t really change your daily routine – your job has very strict hours, and there’s only one viable route, for example.

Clearly, the more affluent you are, and the more free time you have, the more scope you have to pick where you live, exercise, socialise and so forth.

But that’s a problem with the world, not with Atmotube. If an air quality monitor isn’t for you, though, there are still actions you can take.

We can all benefit from learning more about the pollution we’re breathing in, and producing.

Start by reading our guide to improving your indoor air quality at home and, if you drive, make sure that you pick a low polluting car next time you buy a new one.