They’re noisy, often expensive and need regular maintenance and servicing to keep them running effectively. So, with other options available, why buy a petrol chainsaw?

If you’re after a chainsaw to cut up logs for your wood-burning stove this winter, you can choose between a petrol, cordless or corded electric model.

The latter two types are proving popular with gardeners, as they’re generally easier to start and much less likely to disturb the neighbours than your average petrol saw.

But new launches in 2019 are proving that there’s life in petrol chainsaws yet. Of the six chainsaws we tested in 2019, four are petrol models, and they offer some exciting features and added extras.

Read on to see if they’re worth a look, or check out all the chainsaws we’ve tested to choose the right model for you. 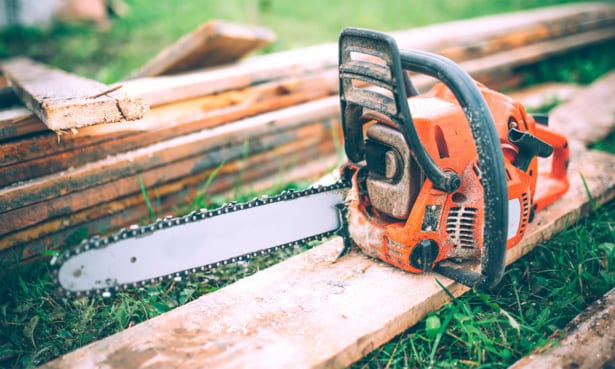 Petrol chainsaws have a reputation for being unwieldy and awkward to work with, but this year’s crop could help to make your chopping a little easier.

If you’ve got particularly wide logs to cut this winter, then a model with a long bar is ideal. They’re usually much heavier and more difficult to start than those with shorter bars, though they do often have more powerful engines.

See our review of the Echo CS-4510ES petrol chainsaw – its 45cm bar is the longest we’ve seen this year.

All chainsaws, whether petrol or not, need to keep a correctly tensioned chain for efficiency and safety reasons. Some models require you to use a separate screw to tighten it, but some models have a useful dial on the side that means you don’t need to reach for a different tool.

Chains need to stay lubricated, otherwise there’s a risk they will not rotate around the bar, causing the chainsaw to overheat and seize. With an integrated oil chamber, you won’t need to do this manually – the chain will oil itself as it spins round. You should still check that your chain is oiled properly before you start cutting though.

These features undoubtedly make your gardening tasks easier, but you really want to choose a chainsaw based on how well it performs. 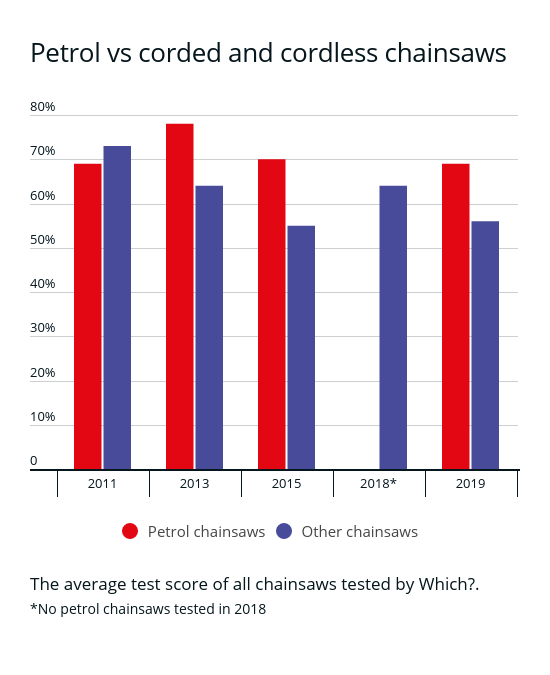 Our tests show that despite a small dip in 2011, petrol chainsaws are consistently stronger in the test lab than their corded electric and cordless rivals (based on their average test scores).

Although petrol chainsaws slightly have the edge, we’ve found great models across the spectrum. So whether you’re set on a cordless or petrol model, see the best chainsaws we’ve tested to find a great performer that aced all of our tough tests.

Get your lawn looking good