NHS patients in England have the right to choose where they receive non-urgent treatment, but making sense of the information available can be tricky. We asked GPs, specialist consultants and other health policy experts what’s worth knowing.

You know you need to be referred for specialist treatment and your GP agrees. But you might not be aware that, as an NHS patient in England, you have the choice of where to go and who to see.

Making that decision isn’t always straightforward, and wading through the vast datasets and information available online can very quickly overwhelm and defeat even the most dedicated researcher.

We’ve picked the brains of GPs and other health experts, asking them what they’d want to know if one of their relatives needed treatment. They told us what to find out, what they would ignore and how you can use this information to feel more in control of your care.

We also explore whether there are any disadvantages to choosing your hospital or provider.

Ask your GP about patient choice

As an NHS patient in England, choice of where to be treated is a legal right for most non-urgent treatment that requires referral. You can also request a particular consultant-led team. But our research found that 63% of Which? members we asked didn’t recall being offered a choice.

Your GP should use the e-referrals systems (formerly known as ‘Choose and Book’), which allows you to shortlist hospitals you’re interested in. If you aren’t ready to make a decision at your GP’s surgery, you can do your research at home. You can then either log in to the system yourself to make a selection, or simply use your research to ask your GP questions so they can help narrow down your choice.

E-referrals won’t shortlist consultants, so if you know the consultant you would like to see, ask your GP to include the request in the referral. It’s not guaranteed you’ll be seen by that consultant, but you should be seen by a member of the team who works under them.

There are exceptions (those serving in the armed forces, for example). And if the referral isn’t appropriate it could be rejected – for example, if you’ve asked for a top specialist but your treatment can be easily carried out at a local community clinic.

If you’re based in Northern Ireland, Scotland or Wales, you don’t have a legal right to choose your provider under the NHS, but that isn’t to say that your GP can’t involve you in decisions around your treatment.

As a private patient you should have choice wherever you live, but it’s possible that you could be restricted by the approved list of providers your health insurer uses.

Find out which health insurers are rated most highly by Which? members in our guide to the best private health insurance. 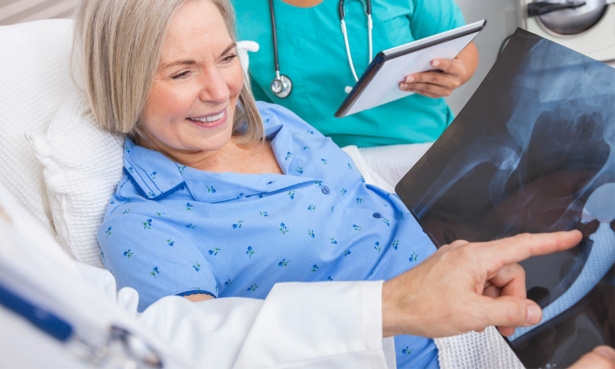 Researching your doctor or hospital

Advice from the experts we spoke to, as well as the experiences of Which? members we surveyed, highlight some key factors to consider when choosing where to be treated for non-urgent procedures: location, the consultant in charge of treatment, waiting times and safety.

When we surveyed Which? members, we found that location was the most important factor in their choice if they were using the NHS. Being close to home can mean you’re near family or friends who can help look after you. But in England, if there’s someone who can look after you who lives in a different part of the country, you can instead ask to be referred to a hospital near them. 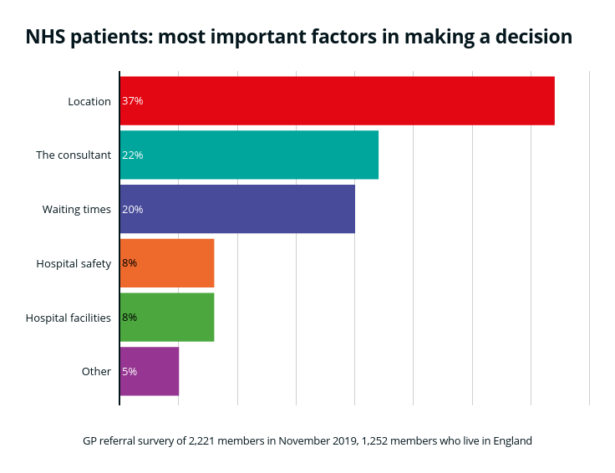 If your primary concern is which consultant you will have, as was the case with private patients we surveyed, you can find information about them on the website of the society or registry for their specialty – such as the National Joint Registry (NJR) or Society for Cardiothoracic Surgery (SCTS).

One measure to look at is how many operations like yours a consultant has carried out. Research has found there is a correlation between the number of surgeries performed each year and complications. One Canadian study found that surgeons who had performed 35 or fewer hip replacements a year were more likely to have a higher rate of dislocations or patients who needed further hip surgery.

England’s NHS data for consultants can be found on the NHS.uk’s service search, although there isn’t equivalent consultant data published in Wales, Scotland or Northern Ireland.

Private consultants should have their number of procedures published on the Private Healthcare Information Network (PHIN). Some other outcome measures that are collected by the NHS, aren’t yet published for the private market. So check whether your consultant has equivalent NHS data or, if it isn’t published, ask for it at your initial appointment. 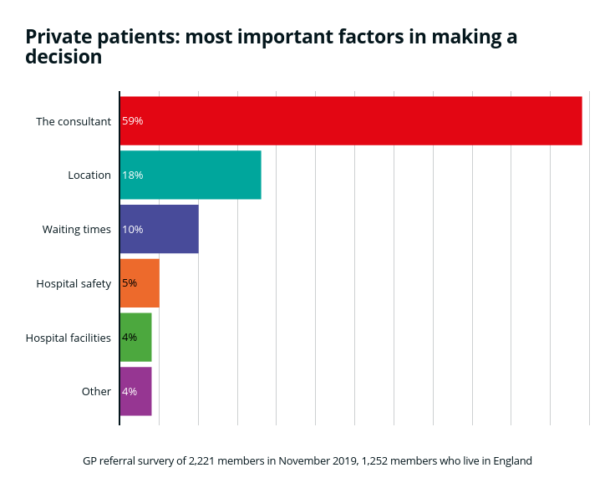 Waiting times for some procedures are published on the NHS.uk website.

The stats can be disheartening, as referral to treatment times regularly exceed 18 weeks – but bear in mind that these figures are at a department, rather than operation-specific, level and are often out of date. It’s possible that your waiting time could be shorter. Try ringing the hospital’s central booking service to see if it has more up-to-date information.

Hospitals and other health premises are inspected by the Care Quality Commission (CQC), or equivalent health regulators in Scotland, Wales or Northern Ireland. Reports are publicly available and there are links to them at NHS.uk and phin.org.uk.

The experts we spoke to said they would be hesitant about choosing a hospital that required improvement, but went on to say it was worth finding out where the hospital was falling down as it might not be in an area related to your treatment.

Healthcare associated infections (HCAI) and rates are now published for both NHS and private hospitals. If a hospital has a higher-than-expected infection rate, ask why – it could be justified by the hospital treating more at-risk groups.

There are 105 private hospitals that either haven’t given data or haven’t given sufficient data to PHIN. PHIN says that if a hospital you’re considering doesn’t have data, you should ask why. For some elective surgeries, some hospitals pre-screen for the superbug MRSA. This is a good sign they take infection control seriously – ask at your appointment. 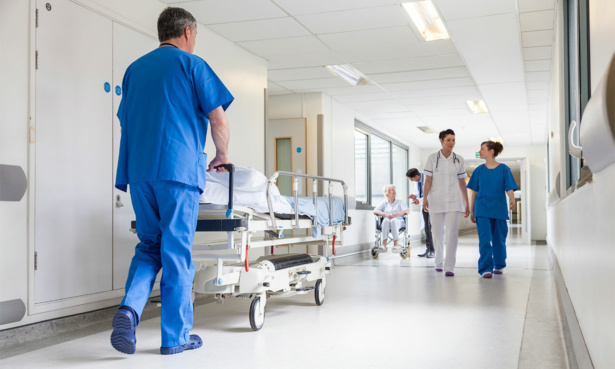 The health experts we interviewed highlighted the importance of a well-run department. A good way to get a sense of this is to consult the NHS Staff Survey (found on NHS.uk). This asks how likely staff would be to recommend their hospital to someone if they needed care and treatment. An ‘among the best’ or above-average rating bodes well.

Professor Cliff Shearman, vice-president of the Royal College of Surgeons, believes that a high-functioning department is at least as important as the individual consultant you request. ‘I am utterly convinced there is no such thing as a “super surgeon”. Some of the best surgeons I have seen weren’t doing anything different to other surgeons, but worked in well-organised, supportive teams, in organisations that supported them.’

Patient review sites can also help you to build up a picture of consultants and hospitals. These are some that could be worth checking:

Organisations or health professionals may have to pay to be listed on sites such as these, so some may not have reviews. Make looking at such sites part of your overall research, rather basing your decision entirely on reviews.

Should you always exercise your right to choose?

The logic behind patient choice in England, introduced in 2006, is that competition improves standards. And opting for a different hospital could mean better or more convenient treatment. But there are a few things worth bearing in mind before you exercise your right to choose.

GP and health writer Dr Margaret McCartney feels personally that offering people choice of provider is often oversold, and can lead to some feeling more anxious than before.

She says that, while offering people choices of rational healthcare interventions is crucial, there’s little evidence that a ‘marketplace’ of providers improves healthcare. ‘Asking people to sift through data to work out which is the “best” hospital is problematic. If there is a “best”, everyone should be using it – if there is a bad choice, no one should.’

Psychologist Barry Schwartz coined the term ‘the paradox of choice’ – when too much choice can produce paralysis. It can also raise expectations and make people feel unhappier with the end result, although the right amount of choice can lead to feeling more in control.

So don’t feel obliged to analyse data and trawl through sites if you don’t want to. It’s the job of regulatory health bodies and audit data to ensure that any hospitals or individual consultants performing relatively poorly are identified, and action taken.