You’d never share a toothbrush or handkerchief, but how about headphones? Sharing music with others is one of the joys of listening, but how often do you clean yours? We swabbed 11 pairs of headphones from volunteers to find out what exactly is lurking on them, with some people admitting they’d never cleaned their headphones before.

Wherever you find living things, you’ll find bacteria, and the human body is no exception. Whether it’s ‘good’ bacteria aiding your digestion or bacteria living on your ears and skin, no amount of cleaning will make you free from bacteria – and it wouldn’t be to your benefit to be so.

What’s more important is knowing where the risks are. So how much of a risk are headphones? Our investigation revealed plenty of surprises, and even a shock or two…

Discover the best headphones – Which? lab tests go further than anyone else

Swabs found bacteria common in soil, dust and even faeces

It might surprise you that every single pair of headphones we tested contained bacteria we were able to grow into cultures at the lab. And these bacteria came from all sorts of sources, including people’s skin, as you’d expect, as well as the local environment, and those commonly found in soil and dust. This could be from placing the headphones down on a surface, or touching these places with your fingers and then touching your headphones. 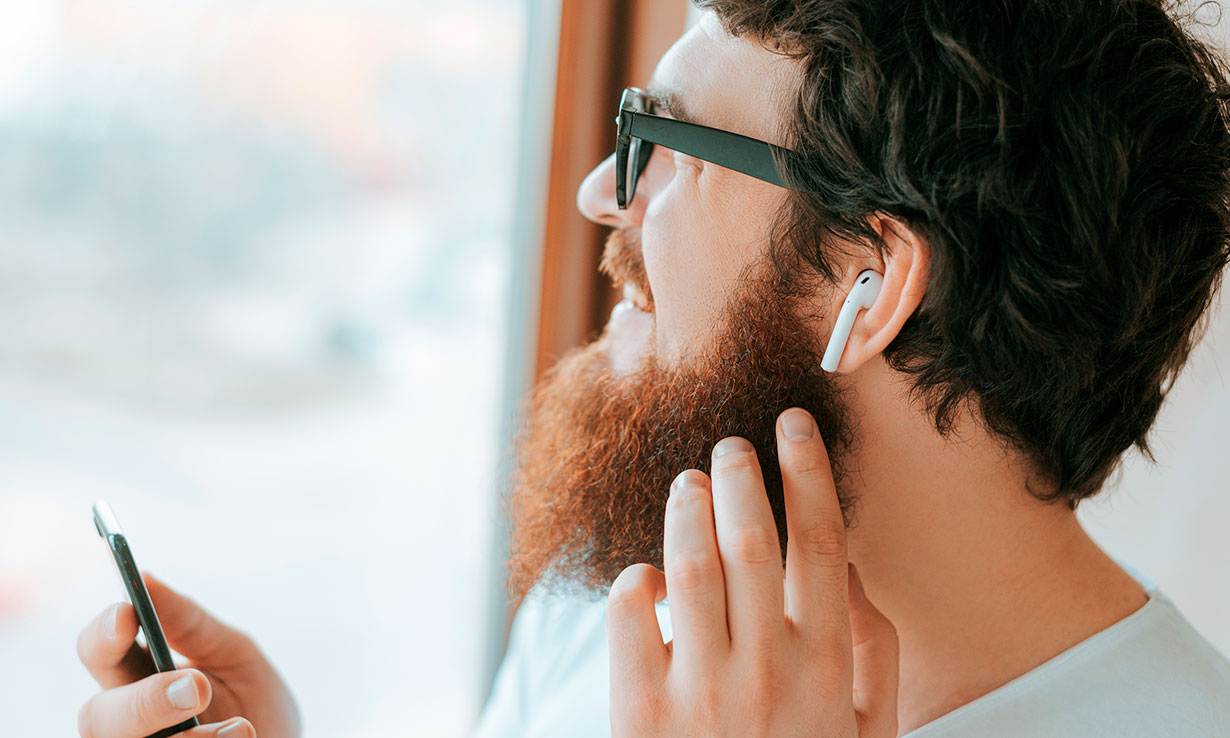 One pair of the headphones even contained a so-called ‘gut bacteria’, klebsiella aerogenes, which the lab says could have come from faeces as a result of the volunteer failing to wash their hands properly after going to the toilet. In fact, the headphones contained more of this bacteria than the toilet seat we also swabbed.

It’s quite rank to consider that bacteria can be passed on to anything you touch – and this is why it’s so important to regularly wash your hands.

This gut bacteria can cause infections in people who are ill (and so have compromised immune systems) or those with underlying health conditions. These infections can range from respiratory and urinary tract infections to more serious life-threatening conditions such as sepsis.

It is also a particularly pesky bacteria that belongs to the Enterobacteriales family, a group that is growing in its resistance to antibiotics. This troublesome bacteria can produce enzymes that inhibit some commonly used antibiotics (cephalosporins), and although risks remain low for healthy people, this does make infections from this bacteria rather more difficult to treat.

Should you be worried?

Probably not. Most of these bacteria we found aren’t a concern for healthy people, but could become more of a problem if you fall ill. For example, eight of the 11 pairs of headphones contained the Acinetobacter bacteria commonly found outside. In people with underlying health conditions at hospitals, this bacteria can lead to infections including pneumonia and bacteraemia (bacteria in the blood, which can lead to sepsis), but it’s unlikely to cause infections in healthy individuals.

All except one of the pairs of headphones also contained staphylococcus bacteria that commonly live on people’s skin. Such bacteria will usually do you no harm, although if you’re ill they can become opportunistic pathogens when your immune system is compromised.

The five bacteria that are common causes of ear infections (and therefore could be most harmful to people’s ears; namely S. aureus, P. aeruginosa, haemolytic streptococci, haemophilus influenza and streptococcus pneumoniae) were not found on any of the headphones.

This indicates that headphones are a low-risk place for harbouring pathogenic organisms. We also tested the headphones for fungus growths (including mould) and thankfully didn’t find any on any of the headphones.

It is likely the saving grace for headphones that they dry out between uses, even if they’re used for exercise, preventing the types of bacteria from developing that are more likely to pose a risk to human health. For example, one of the bacteria that most commonly causes ear infections, called P. aeruginosa, needs moist conditions to survive. 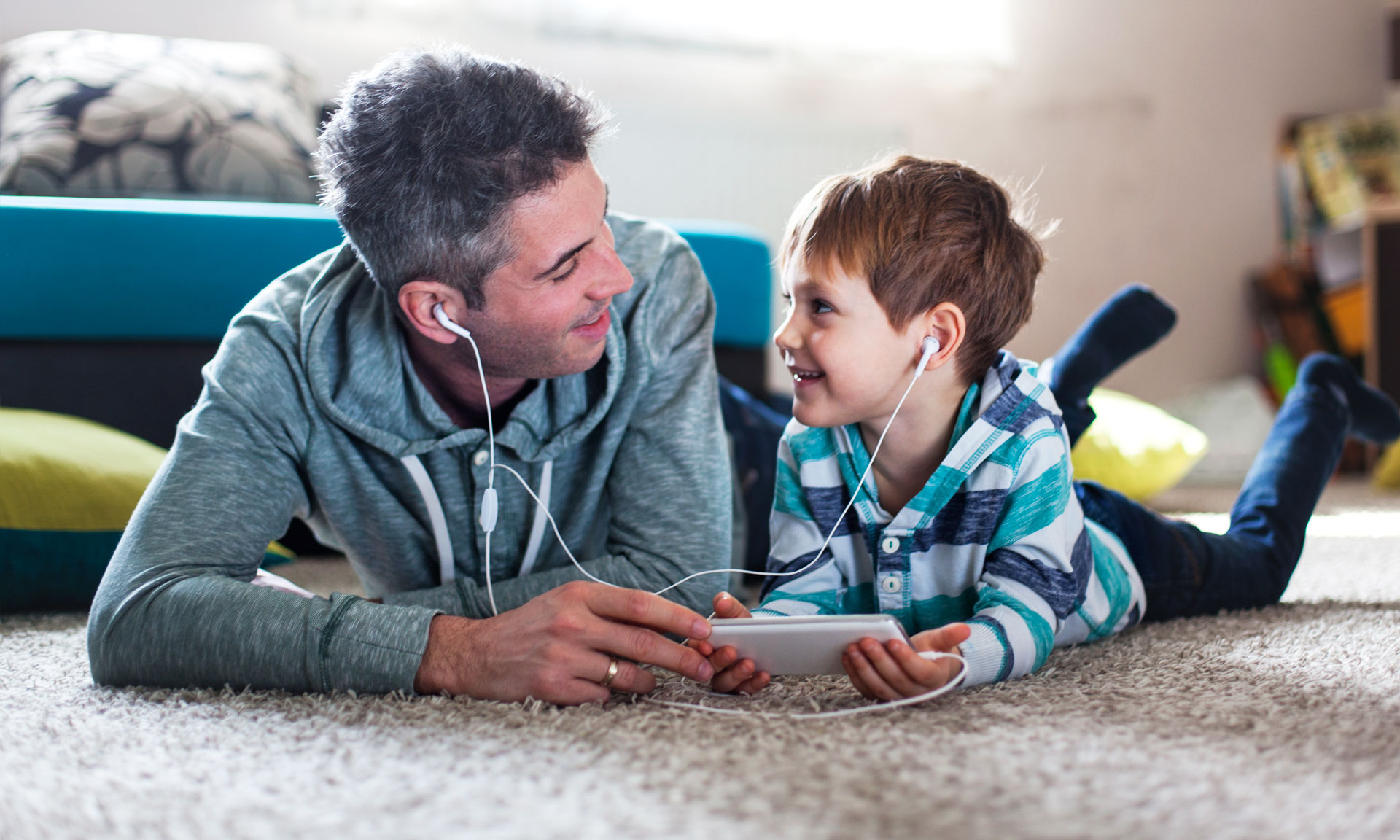 Sharing headphones: safe or not?

The risks are very low for healthy individuals, and it would be common sense not to if you were ill. Our tests indicate getting illnesses from sharing headphones is fortunately highly unlikely.

Nevertheless, we did find that even a clean-looking pair of headphones can harbour significant bacteria – the pair with the gut bacteria was surprisingly one of the cleanest-looking pairs we swabbed, with little visible dirt. Many people wipe off visible earwax and dirt after using their headphones with their fingers, and that’s not a proper cleaning strategy.

In fact, the headphones we tested ranged from heavily earwaxed pairs that produced pretty disgusting long smears along the rectangular testing swabs to ones with little visible dirt at all.

The pairs that had the most earwax accumulated were the earbud-style headphones – we swabbed a pair of Apple AirPods, Apple EarPods and a similar lookalike wired Huawei pair. This is because with earbud headphones, the gauze covering the headphones’ speaker is exposed rather than being covered with the removable flexible eartips on typical in-ear pairs. This also makes them harder to clean.

Can you get an ear infection from sharing headphones?

Yes, but if you’re not ill and don’t have existing health conditions which mean you have a weaker immune system, the risks are very low. Washing your hands regularly is far more important for protecting your overall health and avoiding getting ill.

How best to clean headphones

You should always follow your headphone manufacturer’s instructions for cleaning your headphones (check if they’re provided for your pair), as all headphones are different and you could inadvertently damage them.

For example, many headphones warn not to clean with alcohol as it can damage the surface of headphones. Most headphones also aren’t fully waterproof (even if they say they’re water resistant). 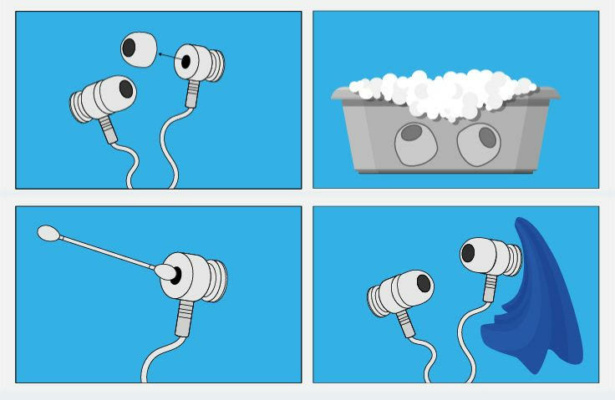 Focus on the eartips or earcups which touch your ears

If you’re using in-ear headphones with removable flexible eartips, you can remove these and wash them on their own in a light soapy solution. If you use Comply foam eartips, Comply recommends using only water.

Some on-ear and over-ear headphones also allow you to remove their earcup fabric. If this is possible with your pair, you can carefully wipe them with a slightly damp cloth and allow them to dry – but do take care as some earcup fabric can be surprisingly absorbent, and the foam under the fabric can be very absorbent, so take care not to get them too wet and avoid any seams. Make sure they’re fully dry to prevent mould growing. In practice, it can also be tricky to re-attach the earcups to your headphones, so watch carefully how they’re attached when you remove them. Some manufacturers, such as Sennheiser, also often offer replacement earcups if yours are in a particularly poor condition.

To get out dirt that has collected in holes in the headphones, ideally use a toothpick and take great care not to poke the dirt further into the headphones or damage the fragile gauze covering the headphone speakers. Do not get these areas wet, and take care if you find you need to use a cotton bud to clean away any remaining dirt, as these can leave strands of cotton that can be tricky to remove. If your headphones are particularly dirty, you could well find cleaning around the gauze improves the sound quality as well – just like excess earwax in your ears, wax build-up in headphones can block the sound coming through clearly.

Most headphones aren’t fully waterproof (even if they say they’re water resistant), so the safest cleaning method is to try a dry cloth first. However, oils from skin contact often build up which can be difficult to remove. If this is the case, damp the cloth very slightly with a light soapy solution and very carefully clean the surfaces, avoiding sensitive areas such as the gauze over the speakers, joins in the material, wires, buttons and charging connectors. For dirt caught in these areas, use a dry toothpick instead to dislodge the dirt and then a dry cloth to remove it.

Looking for waterproof headphones, durable pairs or the very best-sounding models on the market? See our comprehensive headphone reviews.