All of us are aware of the plastic pollution we pump into the oceans – from carrier bags to plastic bottles, straws and more. But many of us are contributing to another type of pervasive and hidden pollution, often without realising it. They’re called microplastics.

Microplastics are tiny particles invisible to the eye that are caused by the breakdown of plastics, including from our clothes.

They remain a largely unreported threat, despite evidence that the pollution is at a global scale and harmful to ocean life (and possibly to us, too).

Read on to find out where microplastics come from, how to reduce your impact and whether governments or manufacturers are going to do anything about it.

Where do microplastics come from? 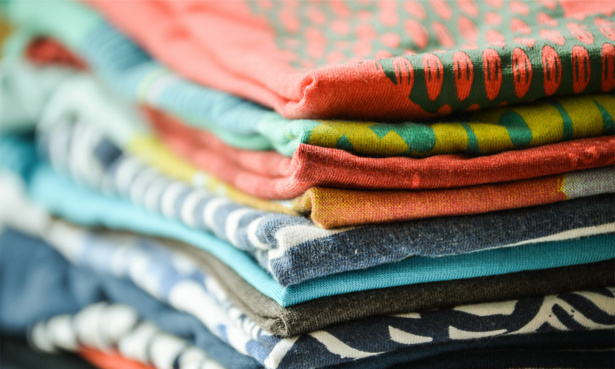 Clothing labelled 100% polyester, acrylic, nylon or polyamide is really just 100% plastic – all made from crude oil and not biodegradable.

Every time you wash that favourite polyester fleece or running top, you release thousands of tiny plastic fibres which are called microplastics.

Types of synthetic fabrics made of plastic

Some of these fibres could get caught by the washing machine’s filter or in water-treatment plants, but the smallest end up in the ocean.

So why aren’t microplastics as hot a topic as plastic bags or straws?

A 2016 paper from the University of California estimated that 100,000 people produce approximately 1.02kg of microplastics each day from doing laundry.

That means the UK pumps out almost 250,000kg of microplastics from laundry each year – the equivalent of around 49 million plastic bags. 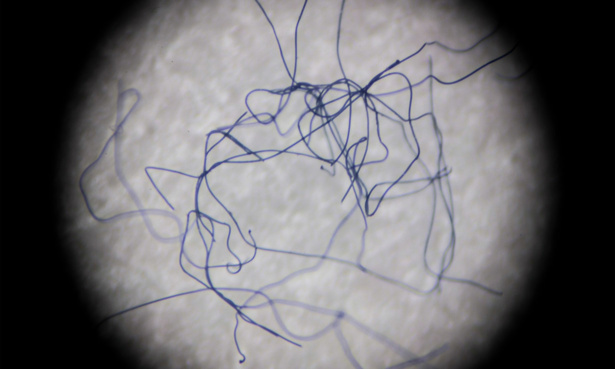 The problem is that microplastics are so tiny they are an invisible pollution – so they don’t lead to front-page images of turtles suffocating on a plastic bag.

But from the Arctic to the Antarctic, microplastics have been found on beaches, in waters, in the seabed and even inside animals ranging from fish to marine mammals, proving it is a global issue.

Just think, your Friday night chippy tea could have thousands of plastic particles in it thanks to your weekly wash.

How microplastics harm the environment 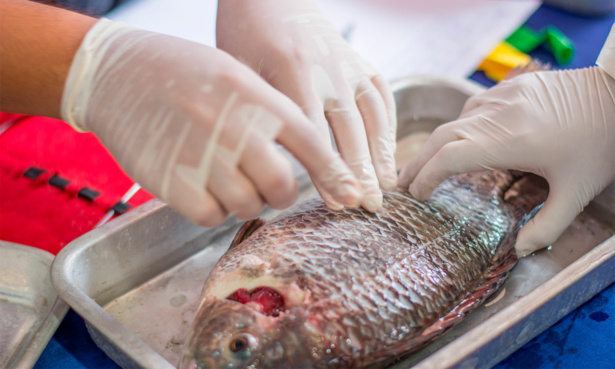 While microplastic pollution is well-documented by scientists and understood to be global, how serious is the harm to the environment and us?

To answer that key question, it’s worth remembering that ‘the dose makes the poison’.

According to the Center for International Environment Law, most of us will be fine, but with high exposure and under specific circumstances, microplastics can become more of a problem.

When they’re small enough, microplastics can penetrate cell membranes, and cause inflammation and damage.

They also act as mini Trojan horses, carrying additive chemicals or contaminants into you and animals around the world.

And the longer we wait to act, the worse the issue will become.

How to stop microplastic shedding

To play our part, we can all avoid buying new synthetic clothes. You can also reduce the microplastic footprint of your existing wardrobe.

The key is understanding that microplastic shedding is caused by three things: abrasion, heat and chemicals (from detergent). 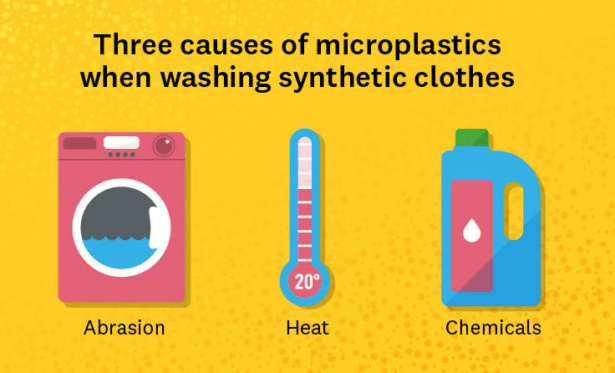 The main culprit is abrasion, where synthetic fibres rub against hard fibres (such as denim), the washing machine drum and each other, and shed into small bits.

You can minimise this by keeping synthetics separate from tougher items such as jeans.

According to researchers at Newcastle University, the amount of water used per wash also makes a difference. They found that a delicate wash paradoxically released more microplastics, because it used more water.

So an eco wash, which uses less water and energy, could be your best bet. The water use for different programs should be listed in your washing machine’s manual. 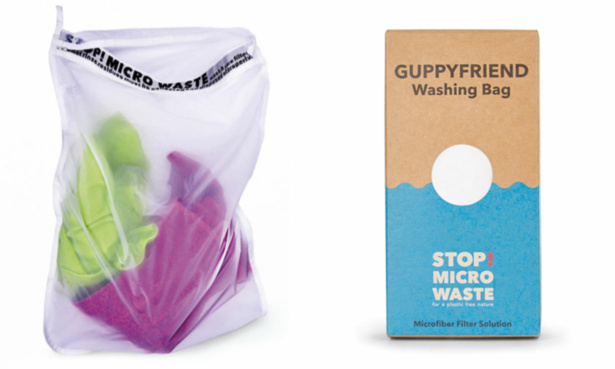 The Guppyfriend laundry bag looks, at first glance, just like a plastic net bag, and that’s more or less what it is. But this £25 plastic net could save us from microplastics.

You squeeze your synthetics into it (about 4kg will fit), and it apparently prevents microplastics being released by reducing the stress on clothes, limiting how much they shed fibres.

It captures any microplastics in the bag so the fibres don’t go into the ocean where they are ingested by animals.

The bag itself doesn’t shed microplastics because of the type of plastic it’s made from, Polyamide 6.6.

At the end of our trial wash there was a peanut-sized lump of black fluff in the corner of the bag. The instructions tell you to collect this fluff after each wash and put it in a closed container which can then go in the the bin, so it can’t escape. 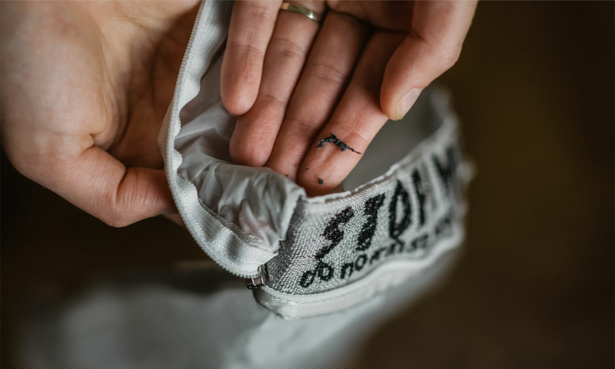 One downside we found was that sometimes the bag got itself tangled up and twisted, making the spin less effective.

To fix this, we had to redistribute the clothing inside and run a spin cycle again.

Guppyfriend recommends that you add other, non-synthetic textiles to your wash load so the spinning works as usual.

Next, we tried washing the same clothes in a zip-up pillowcase. But the zip came undone in the wash, and all the clothes escaped.

The Guppyfriend bag didn’t have this problem because the zip is not at the hem of the bag, so it doesn’t bear the brunt of your heavy, tumbling clothes.

That said, you could tie a pillowcase up at one end although it won’t hold as many items inside.

So, while the Guppyfriend is an investment, it clearly keeps shedding fibres away from the drain better than my homemade version, but you might need to use more energy on an extra spin.

What the future holds for microplastic pollution 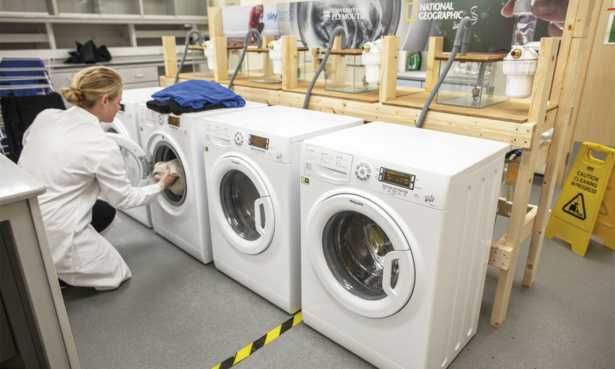 We can all do our part to be more responsible, but there is clearly a need for better practice on the part of clothing and appliance manufacturers, as well as governments.

Several manufacturers, including Beko, Bosch and Miele, are promoting new washing machine features that protect fibres, rotate clothes gently and cause minimal friction. Beko is also working on a microplastic filtering system that could go into washing machines.

We spoke to the Department for Environment, Food and Rural Affairs (Defra), which told us: ‘Through powers in our landmark Environment Bill [announced in 2019], we’re planning to introduce new laws to encourage the clothing industry to make more sustainable choices and work with the water industry to find new methods to detect, measure and remove microplastics from wastewater.’

Defra said it had ‘commissioned a report from the University of Plymouth to investigate the sources and pathways of microplastics from tyres and textiles into the marine environment. The report will be published in due course and the evidence will help us develop policies to effectively tackle the problem.’

It’s clear that microplastics will become a growing problem unless action is taken. You and I can only do so much – governments and big business have a responsibility to act early to prevent a future crisis.

Which? will be offering our expertise where we can, and supports measures to help reduce and eventually eliminate the threat of microplastics.