Modern cars aren’t just vehicles you fill with fuel, they’re also computers filled with data. And yours may know an awful lot about you, from your phone number to the addresses of your contacts. We show you how to properly delete your data – or the previous owner’s – from your car.

Pair your phone to your car via Bluetooth or USB, and your car could absorb all your messages and contact details from your phone. It may also know where you live, where you work, and the addresses of your friends and family.

Your car might even know your home wi-fi credentials.

Emerging from lockdown to buy a new car? Here are the best cars you can buy today.

The risks of leaving your data in a car you sell

Unless the correct steps are taken to erase that data before you sell your vehicle, it’s not just the car that knows more than it should; all that data could be accessed by the person you sell it to.

It’s in a buyer’s best interests to make sure all former connections are broken, too. Most won’t want someone else’s data clogging up their car’s computer.

Potentially more concerning, if the previous owner downloaded the car’s app and failed to break the link between the car and the app, it could allow them to track the location of the car they sold to you, unlock its doors and even start the engine.

Just deleting the app won’t remove these access rights. But even so, only half the people we surveyed who had downloaded the app for a car they had sold in the past two years said they had actually deleted it after selling the car.

Four in five fail to properly delete their data

Between December 2019 and February 2020, we surveyed 14,079 people who had sold their car in the past two years. More than half had synced their phone to their car via Bluetooth or USB (the latter using Android Auto, Apple CarPlay or Mirrorlink). 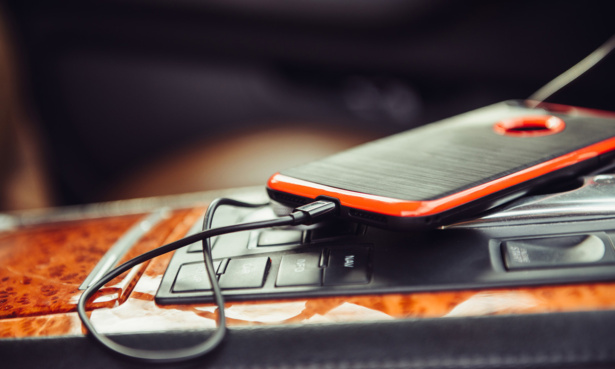 Of those who had synced their car, most had not followed instructions in the car’s manual to delete all their data from the car before selling it on – the best way to make sure no personal details are left on the operating system. More worryingly, nearly a third had made no attempt whatsoever to remove any of their data from their car.

Chart: did drivers delete their data before selling their cars? 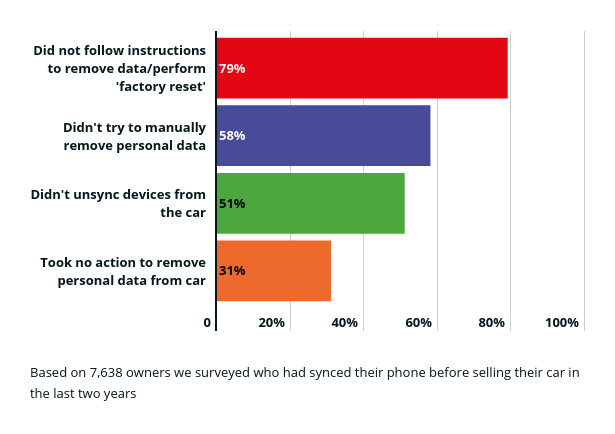 Could you be giving away your passwords?

Bear in mind that it’s not just the data you can easily see that you need to be worried about.

As part of a separate and groundbreaking connected cars investigation, we bought a VW Polo infotainment unit from eBay. We did this to secure the firmware for analysis, but we also found a large amount of information about the previous owner, including their home wi-fi password and username.

We deleted their data immediately, but others may not be so kind.

Car apps have been used for stalking

Many modern cars also have associated apps. These typically let you view the status of your vehicle and may include useful features, such as the ability to set the air-con remotely, or activate the car’s lights or horn to help you find it in a car park.

Some also let you track the car’s location, unlock the doors and even start the engine.

While these features can be very handy while you own the car, unless you break the link with the app, you may retain the ability to do these things after you sell the car; something that the new owner would probably be alarmed to discover.

In our survey, only half of those who’d downloaded their car’s app had unpaired or deleted it since owning the car. And most didn’t follow the manufacturer’s instructions to remove all information from their car.

Chart: did drivers unpair their apps before selling their cars? 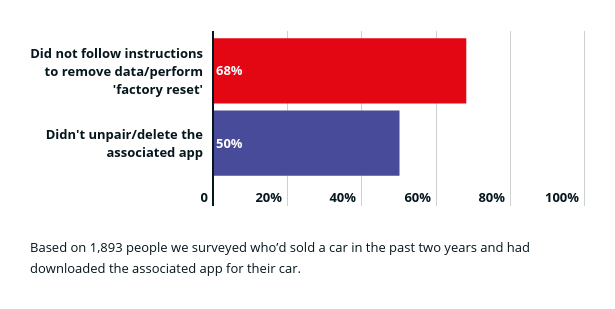 There are already cases of people using apps for stalking. In November 2019, reports surfaced of a man who had helped his then girlfriend buy a car, then used the registration information to download an app that allowed him to stop and start the car, and track its location.

After they separated, he used the app to stalk her for months. She only found out when she woke up with him standing at the end of her bed.

How to properly wipe data from your car

Removing your personal data from your car should be very quick and easy – watch the video below, or read the summary underneath the video, to find out how.

Think of it like restoring a phone to factory settings. Typically, it’s a simple case of going into the car’s infotainment system, accessing the settings menu and finding the option to erase your account and data.

To be certain you’ve done everything you need to, check the car’s manual (which may also available online) and follow its instructions on how to delete your data from the car.

Once you’ve made the effort to delete your data, don’t absent-mindedly reconnect your smartphone to the car as you drive it to the dealer or its new owner as this could undo all your work.

How to revoke an app’s access to your car

If you’ve downloaded and set up an app linked to your car, then just deleting your app from your phone isn’t enough to remove your access.

Instead, you need to break the link between you and the vehicle. Again, you’ll need physical access to the infotainment system (so you can’t do it after you’ve parted ways with your car). Find the master reset key in ‘Settings’ and follow the instructions on the unit or check the manual for how to do this.

What to do if you’re buying a used car

When buying a second-hand car from a dealer or private seller, ask for evidence that all data has been removed and access rights revoked. Then you won’t have to worry that the previous owner can still track, unlock or even drive away with your new car.

Every car we review goes through hundreds of our lab and road tests. Only the very best new and used cars make our shortlist of the top cars for 2020.