Which? is warning property hunters to watch out for rental fraud, after uncovering a fake lettings agency calling itself Villageway Lettings, which managed to steal £5,600 from one devastated victim.

The con involved a fake landlord sending a falsified Booking.com link to reserve a London property after a virtual viewing in March. The victim transferred his savings from his Revolut current account, assuming he had secured the flat for two years.

Here we explain how the scam unfolded and why Revolut is refusing to refund the stolen money.

Rental fraud: how it happened

This rental fraud scam started with an email from info@villagewaylettings.co.uk offering the victim – who we will refer to as Mr F – the opportunity to view a property that matched his ‘search requirements’ in a block of flats in south London.

Mr F had originally been alerted to this building by an estate agent called RE/MAX Property.

‘I’d gone to a flat viewing in early March for a property I had missed out on. The email advertised a property in the exact same building,’ Mr F told Which?.

It’s unclear how the scammers knew Mr F’s email address or search requirements, but Andrea Frigo, director of RE/Max Property Group told Which? that it has never had a relationship with Villageway Lettings and never shared any contact details with any third parties. It is also unaware of any data breaches from its database.

Although VIllageway Lettings did not attempt to impersonate RE/Max Property, Mr F assumed the connection was legitimate and replied to the email stating his interest in the property. He was told to contact the landlord directly, who apparently worked as a cardiologist in Switzerland.

‘I did an online virtual tour (given COVID there were no face-to-face viewings),” says Mr F. ‘I would usually never go for a place without seeing it, but given the special times we are in, I had no choice. And given how quick flats in London go, I needed to act fast. The “landlord” asked me for a reference, which I provided. I checked his place of work in Switzerland and it seemed all legit.’

After some back and forth with the ‘landlord’ via email, Mr F arranged to book the flat for a two-year period and was told to secure this via Booking.com (as seen in the email below, names blanked out). 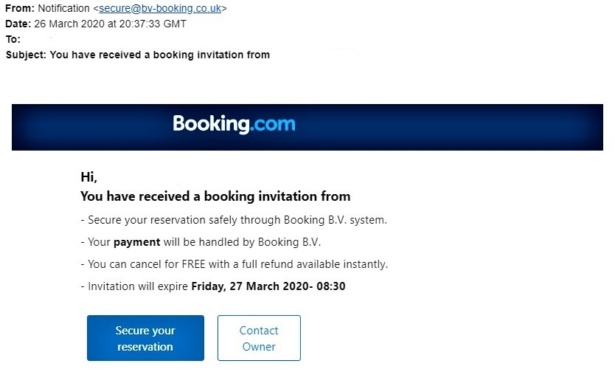 This supposed Booking.com link appeared to be from a legitimate email address, so Mr F made the transfer via his Revolut account. A few weeks later, when the lockdown restrictions started to ease, he contacted the landlord to ask about the property but heard nothing back.

He contacted the police and Trading Standards, who told him that the supposed landlord’s phone number may be linked to a cyber-crime organisation.

Booking.com has confirmed that the email had nothing to do with the company and that legitimate emails only ever come from accounts ending in ‘@booking.com’:

‘We have investigated the matter and can confirm that secure@bv-booking.co.uk is not a genuine Booking.com email address, nor do we have any record of [the landlord] or Villageway Lettings ever listing a property on Booking.com. We also don’t have any previous bookings in our system from the customer email address that was unfortunately targeted by this scam.’

Which? also contacted the company that purports to be ‘Villageway Lettings’ but received no response.

As soon as he realised what happened, Mr F got in touch with Revolut via live chat – as it’s a mobile-only bank – to tell it he had been a victim of fraud.

‘All I got was a chatbot that shows no empathy and pastes boring answers that don’t help. It’s a faceless organisation so there is nobody you can talk to on the phone.’

Two weeks later, he received an email stating that the bank would not be reimbursing him for the stolen £5,600 but would contact the beneficiary bank – used by the ‘landlord’ – to see whether any of the stolen funds remained.

This bank is a Lithuanian fintech called Via Payments UAB (using the brand name ‘Vialet’) which has a banking licence from Bank of Lithuania.

Shockingly, Revolut told Which? that Via Payments UAB did not respond to repeated requests for information. We also approached Via Payments UAB and, apart from an initial holding email, we received no response to our questions.

Which? is very concerned that a bank would ignore requests relating to suspected criminal activity both from another bank and a consumer organisation. Typically, we would expect banks to take steps to freeze accounts linked to crime and respond to requests from other banks with regards to possible fraud.

We approached Bank of Lithuania with our concerns about Via Payments UAB. Rūta Merkevičiūtė, a spokesperson for the bank, said:

‘It goes without saying that upon receipt of information on possible cases of customer fraud the licensed market participant, including Via Payments UAB, should take steps to assess the information received to prevent identified customer fraud and take other legal actions, including to inform law enforcement authorities, if there are legitimate grounds for doing so.

‘However, it should be noted that neither the financial participant nor the Bank of Lithuania is authorised to investigate the possible criminal offences. These actions are performed by competent law enforcement authorities. Please note that financial institutions have no obligation to disclose, and in some cases do not even have the right to disclose, to other persons (eg Revolut) information about the specific actions taken against their customers.’

Why Revolut won’t refund the victim

Revolut – which also has a banking licence from Bank of Lithuania but operates under an e-money licence in the UK – isn’t signed up to a voluntary bank transfer scams code that aims to better protect customers from bank transfer scams.

It told Which? that it ‘does not provide refunds in cases of customer negligence’ and as the customer made this transfer ‘willingly and on his own’, it doesn’t agree that he should be reimbursed.

We have advised Mr F to ask the Financial Ombudsman Service to review his complaint.

The smartest ways to give money to your children and grandchildren