If you shop at Asda or Iceland, you can easily get your hands on Which? Best Buy mince pies this festive season.

This year, our general public testing panel blind tasted 11 premium mince pies each from all the biggest supermarkets, including the discounters Aldi and Lidl. Pies were rated not only on flavour, but also on texture, aroma and appearance. Only two were good enough to earn our coveted Best Buy stamp of approval.

Iceland and Asda mince pies tied at the top 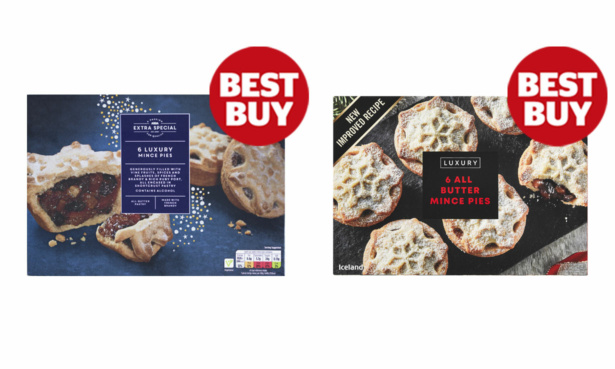 Iceland’s Luxury and Asda’ Extra Special all-butter mince pies were worthy Best Buys this year, creeping ahead of the competition by a single percentage point.

It’s the texture and flavour of the filling that helped them take joint-honours this year, with Asda also rated particularly highly for its simple but well-designed star-topped pastry cases.

In third place, just a percentage point behind, is Tesco’s Finest brand of pies, which scored well for their delightful snowflake-topped pastry cases, as well as for flavour.

To see the full ranking, head to our round up of the best mince pies 2020

Even better, none of the top-three packs of pies were anywhere close to being the most expensive on test this year, with Asda and Tesco priced at just £1.75 (29p a pie) and Iceland not much more at £1.89 (32p a pie).

The priciest were M&S and Waitrose, priced at £2.50 per box (42p a pie), with M&S claiming fourth spot with its tasty Collection-branded pies, and Waitrose coming mid-table with its No. 1 pack of pies.

The cheapest pies on test came from Aldi and Lidl, with their boxes of six priced at £1.49. These pies were mid-table for most measures, but had no faults that stopped them being a tasty festive snack, with Lidl in particular impressing with the texture of its mincemeat filling.

At the bottom of the list, Sainsbury’s Taste The Difference pies had a very poor showing, with pastry and filling judged too hard, and a flavour that was just too weak.

See which eco Christmas crackers did best in our test.

The products were assessed by a large panel of people who like mince pies.

The make-up of the panel broadly represents the demographic profile of adults in the UK. Each mince pie variety was assessed by 64 people. The panellists rated the taste, texture, aroma and appearance of each product, and told us what they liked and disliked about each one.

The taste test was blind, so the panellists didn’t know which brand they were trying. The order they sampled the mince pies in was fully rotated to avoid any bias. Each panellist had a private booth so they couldn’t discuss what they were tasting or be influenced by others.