One in three people have tried to pay for something in cash and been unable to do so since the first national lockdown, new research from Which? shows.

People were most likely to be refused the option of paying in cash when buying groceries, which accounted for 28% of incidents, our survey of 2,004 people in November 2020 found. This was followed by paying for leisure activities such as going to a pub or restaurant (24%) and buying cleaning products (21%).

More than three quarters of those who were unable to pay in cash said it an emotional impact on them. Most commonly this was frustration (44%), while 26% said the incident made them anxious and 23% found it to be embarrassing.

Millions of people depend on cash

Some 13% of respondents, equivalent to seven million people, told us that they regularly use cash and would struggle without it.

Another 5% of people said that they depend on cash and would not be able to do the things they need to do without it. This equates to more than two and a half million people.

If businesses refuse to take cash, they risk excluding these people, many of whom are among the most vulnerable in society.

Some 53% of people said they had replaced some or all of their cash use since the first lockdown. Of these, 46% said that their declining cash use was as a result of shops prohibiting or discouraging it.

‘My independence has been taken away’ 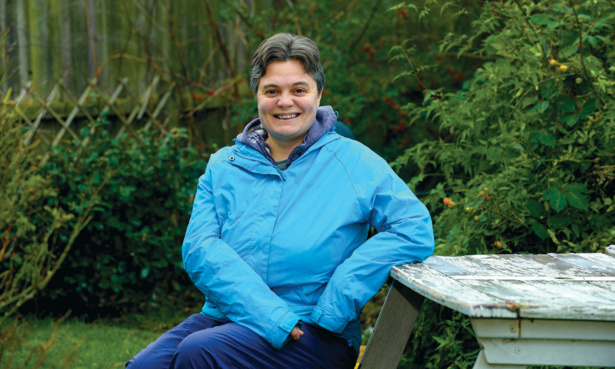 We heard many examples of the harm caused by being unable to pay in cash, including from Lucy* (pictured), from Oxford.

Lucy has a chronic illness which left her essentially housebound for almost seven years. In the past year, she has built up her strength and stamina to the point where she can leave the house once a week, but Lucy says that being unable to use cash is making going out at increasingly difficult for her.

‘If I had to do it all on card, I’d have to keep track of my spending while I’m out and I don’t have the energy to do that. I wouldn’t even bother going out – it would make it impossible.’

‘It’s taken years and years. Now, finally I’m well enough to get out of the house and it’s like my independence has been taken away again.’

Another concerning example came from James Boswell, from London. James is diabetic and was in urgent need of food after getting stuck in motorway traffic in November, but when he stopped at a service station, the first two restaurants he tried refused to serve him as he only had cash. He was eventually able to pay in cash at KFC.

Cash provides ‘a degree of control’

Linda Blacker in Southampton and Joanne Heuston in Brighton contacted Which? Money after they were unable to pay for their bus fares in cash.

Linda says the driver was rude and unsympathetic, telling her she should get a contactless card instead. But for Linda, cash is an important budgeting tool: ‘Quite a few years ago I was in a lot of debt. I’ve used cash ever since because I know exactly where I stand. It’s what works for me.’

Joanne says cash has helped her to manage the financial hardships of the pandemic. ‘I was reduced to furlough payments and my husband, who works as a taxi driver, had no income whatsoever. So the way we managed our finances was that the money we left in the bank account was for bills and we withdrew the rest to live off so we could carefully control how we spent it’.

Jane Tully, director of external affairs and partnerships at the Money Advice Trust, the charity that runs National Debtline, said: ‘We know that people on lower incomes are more likely to use cash. This can provide a degree of control for some people, particularly if they are on a very tight income, as that way they know where they are with their money week to week.’

We think it should be people’s prerogative to pay with cash, whatever their reason for doing so. But there is no legal obligation for a business to accept it. It’s the business owner’s right to decide what payment methods they want to accept.

Not everyone is aware of this, with confusion stemming from the fact that cash is often described as ‘legal tender’.

This doesn’t mean it’s your legal right to use it in a shop. In fact, the Bank of England says that legal tender has a ‘narrow technical meaning’ to do with paying debts and ‘has no real use in everyday life’.

However, with millions of people still reliant on or keen to use cash, it makes sense for businesses to make every effort to accept it.

Is cash safe to use?

Caution in the face of the pandemic is understandable, but just a few weeks into the first lockdown the Bank of England said the risk from banknotes is ‘no greater than touching any other common surface, such as handrails, doorknobs or credit cards’.

It cemented this position in November, by revealing the results of scientific research into the spread of germs on cash. The research concluded that ‘any risk from handling cash should be low’, particularly compared with ‘high-touch’ objects such as shopping baskets, self-checkout touchscreens or products for sale.

This should reassure the 42% of shoppers who told us they were using less cash because they thought card payments were safer.

The future of cash

The proportion of payments made in cash is falling. UK Finance says the figure halved from 46% to 23% between 2014 and 2019. But coins and notes are a long way from obsolete.

Between the 5% of people who told us they rely on cash and the 13% who would struggle without it, that’s 10 million people not ready – or able – to give up cash. That’s not to mention the 22 million who say cash is an essential backup.

Which? welcomes the government’s proposal for the FCA to be given the responsibility to oversee the protection of access to cash in the UK, but we are also calling on the government to make the regulator responsible for tracking the number of UK businesses accepting cash and the rate at which this is changing, in order to determine what action is needed and when.

It’s no good protecting people’s access to cash if they have nowhere to spend it.