New Which? analysis has revealed significant differences in the price of popular wines at the UK’s largest supermarkets.

We tracked the prices of the UK’s most popular wine brands and grape varieties throughout 2020 to see which supermarkets charged the most and least on average.

Both Asda and Sainsbury’s offered good value on popular brands, with one supermarket charging a whopping 22% more on average for Brancott Estate Sauvignon Blanc than Sainsbury’s.

Here, we reveal where to head depending on your favourite plonk, plus the retailers offering the most discounts.

We compared supermarkets’ average prices throughout 2020 on some of the most popular branded wines sold in the UK, according to data platform Statista.

Asda (Asda.com) was cheapest for seven of the 12 bottles we compared, including Barefoot Malbec and Campo Viejo Rioja Tempranillo.

Fans of Marlborough classic Brancott Estate Sauvignon Blanc are best off heading to Sainsbury’s (Sainsburys.co.uk), where it cost £7.41 on average, and avoiding Waitrose which charged 22% more for the New Zealand white (£9.01).

Waitrose was the most expensive supermarket for 10 of the 12 branded wines, with Ocado priciest for the two other bottles.

*Average prices across the whole of 2020. Data gathered from an independent price comparison website.

The cheapest supermarkets for pinot, merlot and more

We also looked at the 10 most popular varieties of grape in the UK, according to wine subscription service Cuvee Privee, and analysed the prices of 382 own-label bottles at all the major supermarkets.

Ocado was the most expensive on average for five of the wine varieties, although this comes down in part to the online-only supermarket’s limited range.

*Average prices across the whole of 2020. Data gathered from an independent price comparison website.

The best supermarket for wine offers

We tracked the total number of wine offers at each supermarket in 2020, and found that Morrisons is your best bet if you’re looking for a discount on a typically higher-priced bottle.

Throughout the year, an average of 17% of its wine was on offer at any one time. This peaked in November and December, when at least 22% of Morrisons’ wine was discounted.

At Sainsbury’s, the number of offers jumped around from week to week – in mid-October, for example, just 6% of bottles were on offer but a week later this shot up to 22%. It’s worth keeping an eye out for bumper deals weeks at the supermarket.

Proportion of bottles on offer at each supermarket in 2020 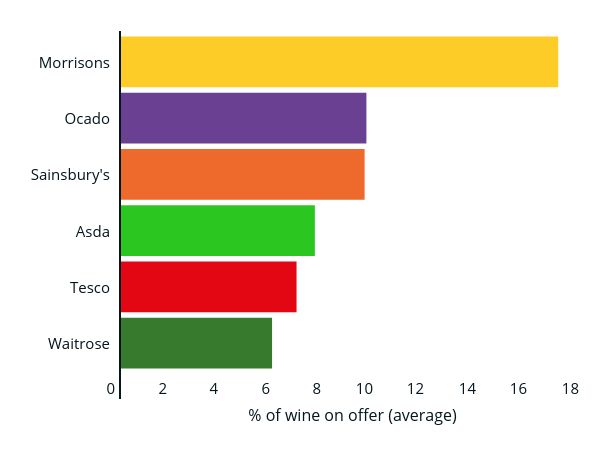 Discounters Aldi and Lidl typically don’t offer deals on their wine range, preferring to keep prices low year round, so we didn’t include them in our graph.

While the percentage of bottles on offer in Waitrose’s wine cellar was low on average, the supermarket often offers deals for buying in certain quantities – for example 25% off if you buy six bottles.

In January 2021, wine importers warned that UK drinkers may face an increase of £1-£1.50 on many European wines due to the cost of new customs declarations and certifications, plus higher haulage prices.

France and Italy are the most popular regions for wine imports to the UK, but if you’d like to drink something from closer to home check out our guide on how to buy the best English wine.

Importers have also warned that shoppers may start to notice a reduction in range, due to flat-rate cost increases per shipment. However, this is more likely to impact wines produced in smaller volumes or from small winemakers.

New boiler upgrade scheme: could you get £5,000 to install a heat pump?