Banks told 77% of fraud victims that they were partially or fully to blame for losses, making them ineligible for reimbursement, official figures show.

The UK’s biggest banks and building societies are signed up to a voluntary code that sets standards for the treatment of customers who fall victim to authorised push payment (APP) fraud, where they unwittingly transfer money from their own bank account to a scammer’s account.

Which? has previously raised concerns that banks rely too heavily on warnings to avoid refunding blameless customers, and that they treat victims of fraud inconsistently.

Damning figures from the Lending Standards Board (LSB), which oversees the code, provide further evidence that the levels of reimbursement are too low and vary widely between banks.

The current data is anonymous but Which? wants banks to publish this data to encourage consistency and improve reimbursement rates. We’re also calling for the voluntary code to be made mandatory, so that all bank customers are protected.

The voluntary code is based on the fundamental principle that blameless victims of bank transfer scams who have been conned by criminals should be fully reimbursed.

But data from the LSB shows that customers were found to be fully at fault for 60% of payments, meaning they’re liable for the losses. Two firms, which aren’t identified in the data, held scam victims liable for more than nine in 10 payments.

Far fewer (17%) payments were assessed as ‘shared blame’, where the customer’s bank or the receiving bank accepted partial responsibility, which means victims got some of their money back.

Only 11% of payments were assessed as ‘no blame’, where victims are refunded in full.

*The LSB data covers the launch from the code on 28 May 2019 to 1 July 2020. Reimbursement data is recorded by firms per individual payment rather than for each case as a whole.

Broken down by scam type, victims of investment scams (where someone is conned into investing in worthless or non-existent assets) were the least likely to be reimbursed: banks found customers at fault in 67% of cases.

For purchase and advance fee scams (where people are tricked into paying for goods and services that never materialise) banks held customers responsible 65% of the time. For romance scams the figure stood at 61%.

Gareth Shaw, head of money at Which?, said: ‘It’s clear that a voluntary code is simply not enough to protect victims who can lose life-changing sums of money to bank transfer scams, and the current system lets banks benefit from a cloak of anonymity when they report their reimbursement rates.’

‘The regulator must work with the government to establish mandatory standards of consumer protection for all banks and payment providers, with strong enforcement to ensure that people are treated fairly and consistently.

‘It must also urgently order banks to regularly publish reimbursement rates, so consumers can clearly see how their bank chooses to treat victims of crime and how well they are tackling bank transfer fraud.’

Are banks expecting too much of customers?

‘A man phoned and said he was from TD Global. He rattled off a shortlist of familiar-sounding firms and offered to send me an email and prospectus. He said he’d call again in a week, which put me at ease, as scammers try to rush you. The email linked to a professional website. I checked the FCA register and saw TD Global is regulated.’

Robert later discovered that the very convincing website – tdglobalfinance. co.uk – was a clone. Unhelpfully, the real company has no website listed on the FCA register so nothing seemed awry when he checked this. Robert ended up transferring money in batches, both over the telephone and at his local Halifax branch.

He was taken through security in a private room at the bank, during which he explained he was investing in TD Global and showed staff the ‘invoice’ he had been sent. He was handed a scams pamphlet and warned about cold calls, but no alarms were raised.

An FCA warning about a clone of TD Global Finance appeared shortly after the final transfer to the fraudsters. Horrified, he immediately told the police and his bank. Halifax returned £30,000 but refused to reimburse the rest, stating that Robert had ‘failed to make sufficient checks’ before investing.

When Which? stepped in to point out that the bank hadn’t asked Robert what checks he had made, and had also been convinced by the scam invoice, it reviewed the case and refunded the rest.

We also spoke to Ava (not her real name) who lost almost £33,000 in August 2019 after responding to a text message about a ‘suspicious payment to Airbnb’ in August 2019. The scammers spoofed Lloyds Bank’s usual phone number, which was sandwiched between two genuine messages (see below) so she called the number supplied. Over the course of an hour Ava was persuaded to transfer her money to a new account, in the belief that hers had been hijacked by criminals.

Lloyds said it wouldn’t reimburse her as ‘she did not take sufficient steps to verify that either the text message or the person she spoke to on the phone were genuine’, and that she authorised the payments despite receiving ‘specific warnings’ stating that Lloyds would never ask a customer to move money to a ‘safe’ account.

We advised Ava to take her case to the Financial Ombudsman Service. After 15 months, an ombudsman ruled that Lloyds should reimburse her for the full amount and repay £250 in compensation for the distress and inconvenience. 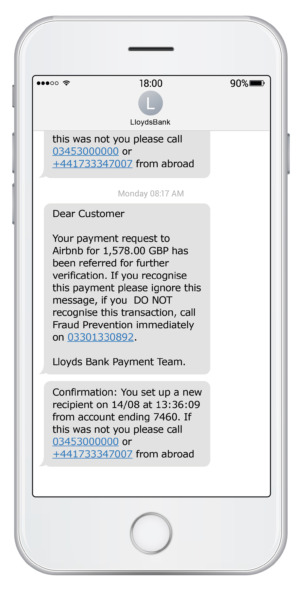 How to get your money back

If you’re the victim of bank transfer fraud and your bank is signed up to the code, you should make a formal complaint asking for reimbursement.

TSB isn’t a signatory of the code, however it promises to reimburse all victims of fraud under its ‘Fraud Refund Guarantee’, launched on 14 April 2019.

If your bank isn’t signed up to the code, you can use this template letter to complain about APP fraud.

If you’ve been told that your bank won’t reimburse you following a scam, you can ask the Financial Ombudsman Service (FOS) to assess your complaint free of charge.