It’s easy to make assumptions or build up misconceptions about electric cars. Did you know, for example, that while electric vehicles (or EVs) are typically cheap to run, there are times when they’re more expensive than comparable diesel cars? If you’re a new electric car owner, or thinking of getting one, here’s our myth-busting guide to the realities of going electric.

According to figures from the Society of Motoring Manufacturers and Traders (SMMT), published by EV charge point mapping app Zap Map, there are now more than 250,000 electric cars on our roads.

That figure is forecast to rise to more than 12m in just over eight years, after the sale of new petrol and diesel cars is banned in 2030. So even if you’re not an electric car owner now, there’s a good chance you will be in the future.

To help you know what to expect, we’ve busted a few common electric car myths.

Ready to go electric? Here are the best electric cars for 2021

1) You can charge an electric car when it’s raining 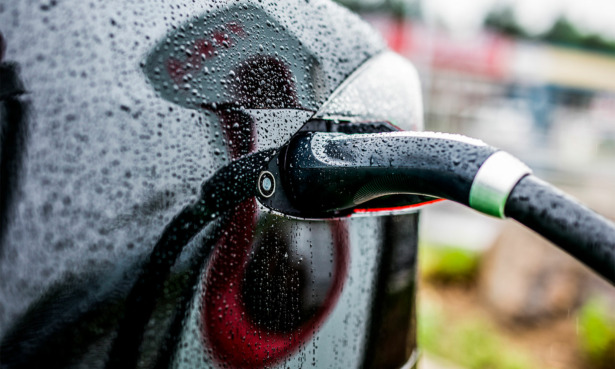 Whether you can charge an EV in the rain is a query we get asked at Which?, along with questions about whether you can drive through deep puddles in an electric car.

The answer to all such questions is yes. You can charge in the rain, you can take an electric car through a car wash and if you have to traverse a flooded road, you won’t be electrocuted (just make sure you adhere to the car’s wading depth – check your manual for details).

Meanwhile, the standards for electric car charge points say the points must have a minimum waterproofing rating of IP44, which means they should be protected from water splashes from any angle – more than sufficient for all rain conditions.

Some charging operators have gone beyond this minimum standard, which should lend even more assurance. For example, Osprey is rolling out new charge points that have a rating of IP65, which means the electrics will be protected against jets of water from all angles, as well as being completely dust-tight.

Rapid car chargers are able to fill a battery to 80% very quickly, but if you want your battery to be fully charged, expect to wait a bit longer.

To help protect the car’s batteries, the car will manage the amount of charge coming in. The fuller the battery, the slower the car will charge from that point.

As an example, the Volkswagen ID.3 (2020-) has a maximum DC charge rate of 100kW. This graph shows how the power from a 100kW charger decreased as the battery filled (its ‘state of charge’), when we monitored this in our lab. 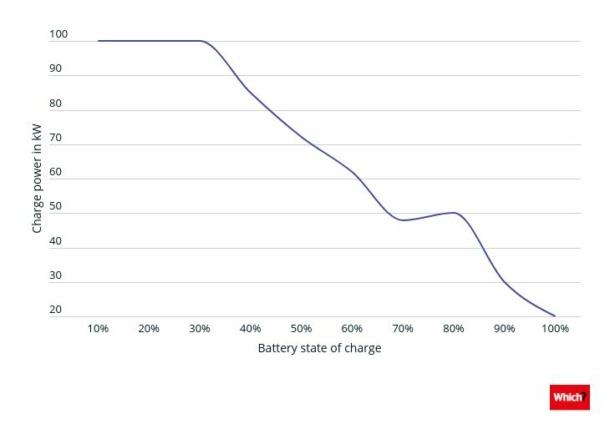 As you can see, the car charged at 100kW up to around 30%, when the power started decreasing, then dropped off more sharply when it reached 80%.

Because of this drop-off, and because you’re very unlikely to ever reach a rapid charge point with no battery left at all, rapid charge times are typically given as how long it would take to charge your battery from 10% to 80%.

Another issue with rapid chargers is that they can be expensive. You’ll typically pay 35p per kWh to charge your car at a rapid charger, or more for ultra-rapid, compared with a typical electricity cost of 19.19p per kWh if you’re able to charge at home on a standard tariff.

We’ve compared the cost of fuelling large diesel and large electric cars, across all the models we’ve reviewed under our current test programme, taking into account their average fuel efficiency and the current cost of diesel.

We’ve calculated that if you’re paying more than 33p/kWh to recharge an electric car using a rapid or ultra-rapid charger, you’ll be financially worse off than you would be fuelling a medium diesel car (or full petrol hybrid) to drive an equivalent distance.

Find out more about when it will cost you more to charge an electric car than fill a diesel by going to our electric car costs guide.

4) Batteries require more energy to charge than they can hold 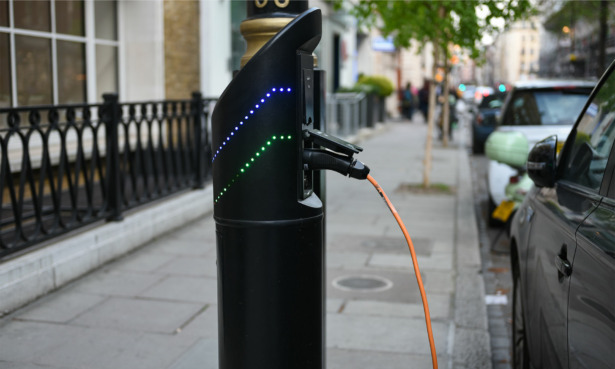 This head-scratcher isn’t unique to the Mercedes – it applies to all rechargeable batteries. We refer to it as ‘loss of charge’.

In our tests, we wrap this tested loss of charge into our average fuel efficiency assessments to provide a more accurate electricity use figure.

We then turn these figures into charging costs; you’ll find them in the tech specs of all our car reviews online. We also provide costs for petrol, diesel and hybrid cars, allowing you to compare day-to-day running costs between different cars and fuel types.

5) The EV market has its own ‘gas guzzlers’ 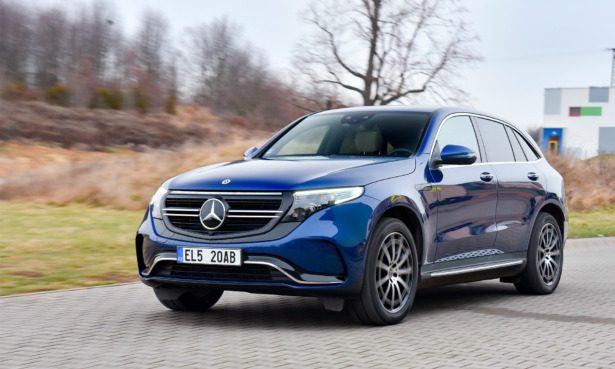 There is a big difference in how much energy different electric cars use to travel the same distance – there are efficient EVs and EV equivalents of ‘gas guzzlers’.

We’re used to this concept in petrol and diesel cars. As a rule of thumb, big SUVs use a lot more fuel than small hatchbacks and city cars. Generally, the same is true of electric cars, and naturally it affects how much it will cost to keep your car running.

Based on average home energy rates of 19.19p per kWh, that would cost you around £480 to drive 9,000 miles (the average annual pre-Covid mileage driven by respondents to our last car survey).

Whereas the enormous Mercedes EQC (2019-), pictured above, is one of the least-efficient electric cars we’ve tested. In our tests it used 27.6kWh per 100km.

While these differences might not be that surprising, there are some unexpected exceptions to the rule. The most efficient electric car we’ve tested is the Hyundai Ioniq EV – a large hatchback (similar in size to a Toyota Prius), which is substantially bigger than the tiny Seat Mii city car. It used an astonishingly low average of 16.3kWh per 100km in our tests, equating to just £453 to drive that 9,000 miles. 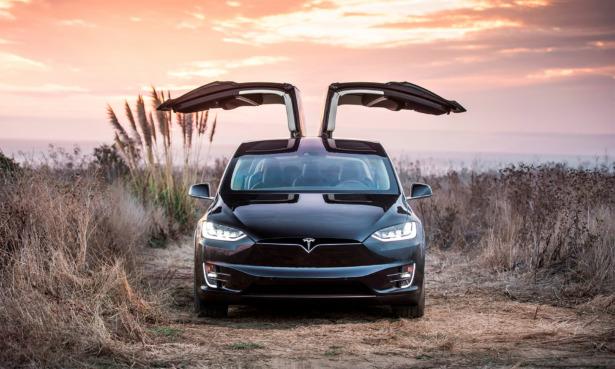 Most electric cars you can buy new or used have little or no towing capacity, although there are early signs that this is changing.

Of the 54 EVs we’ve tested to date (54 different motors across 39 different models), just eight had any sort of towing capacity.

The Tesla Model X (2016-), pictured above, is the car with the biggest towing capacity that we’ve tested in the lab. The current version has a maximum braked towing capacity of up 2,250kg which, as a rough example, should be enough to tow a four-berth caravan (although check before you try).

If your car doesn’t have an official towing capacity, you must not attempt to tow with it. You must also not exceed the towing capacity if your car has one. If you do, it could be seen as using a vehicle in a dangerous condition, which can result in you being fined up to £2,500, having three penalty points added to your licence – or possibly being banned from driving altogether.

7) You can’t tow an electric car, either 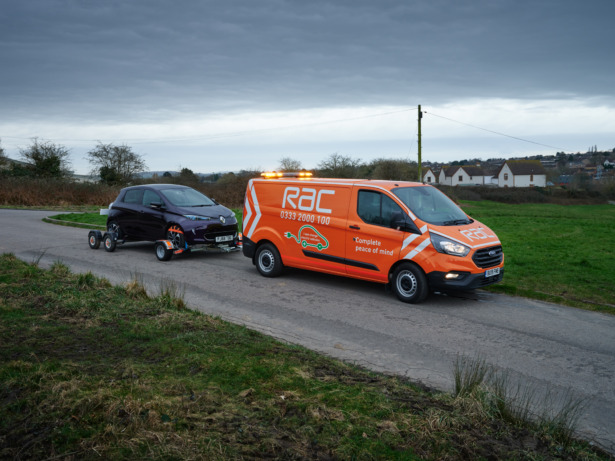 If you’ve broken down in an electric car and a friend turns up with a tow rope, don’t be tempted to use it. Electric cars, such as hybrids, can’t be towed because of their regenerative braking.

Electric cars send power to the ‘driven wheels’ to make the vehicle accelerate. So far, so simple.

But when coasting or decelerating, the electric motors in EVs or hybrids become electric generators, and energy from the turning wheels is recaptured back to the battery. This is called regenerative braking. Physics enthusiasts should look up Flemings’ left and right-hand laws to research this further.

As electric cars and hybrids lack clutches, the electric motor can never be detached from this process. So, if you were to try and tow an electric or hybrid car when its driven wheels are on the road and the car isn’t on, the regenerative braking process could generate a lot of unexpected heat/energy. This could quickly damage the car’s electric motor(s).

To get round this issue, breakdown services are adapting. We spoke to the RAC, which has developed what it calls its ‘all-wheels-up’ technology (pictured above). These are trailers that fold out of the back of a regular patrol van, which can lift all wheels of a car off the road as needed, without having to call in a massive flatbed.

Interestingly, this technology was originally developed for automatic-transmission petrol/diesel cars, as it’s not recommended that automatic cars (and even some manuals) should be towed with their wheels on the road, either. 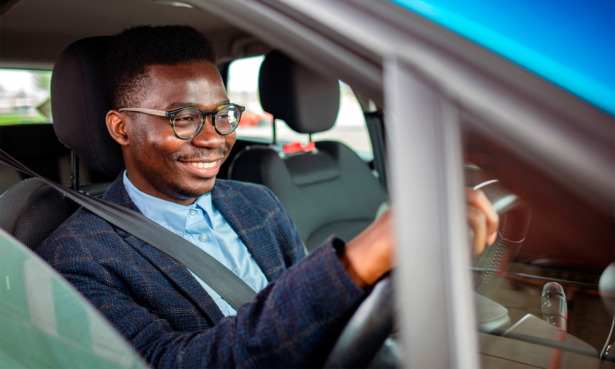 If you associate electric cars with ethically minded but rather hum-drum driving, think again.

Every year in our annual car survey, we ask people how satisfied they are with their car and if they would recommend it to a friend – and electric cars (and hybrids) are proving to be the most satisfying (fuel) types of car you can drive.

Why could this be? You might think it’s the knowledge they’re driving ‘greener’ that’s giving people a buzz, but we believe it’s also due to the often unsaid benefits of electric cars – specifically related to their electric motors.

Electric motors have big advantages over combustion engines: they are near-silent, they don’t produce engine vibrations, they deliver their power smoothly, and acceleration is instant.

In terms that we can all appreciate, it means electric cars are quiet, incredibly smooth, easy to control and remarkably nippy when you want them to be. In fact, you’ll need to get used to the kick-back when you accelerate away from a standstill.

Taking away all that engine sound and judder and mixing it with responsive, quick acceleration will make an electric car feel otherworldly at first, an evolution beyond combustion cars and hybrids and something that seems to be winning over those that have already bought an EV.

Not convinced? If you’re on the fence, book a test drive when you feel it’s safe to do so and find out for yourself. You may just end up converting.

These are all units you’ll come across if you own an electric car. Here’s what they mean.

kWh A measure of energy and the same unit you see on your electric bills. In the cars world, the places you’ll frequently come across kWh are:

kWh/100km How much energy the car will use to drive 100km (62 miles). This is an electric car’s fuel economy figure, making it the equivalent of miles per gallon (mpg) in a petrol or diesel car.

Bear in mind that your EV will  have two maximum charge rates, not just one. Public charge points that supply 3kW to 22kW are called slow or fast charge points, and deliver AC (alternating current). Rapid (25kW to 99kW) or ultra-rapid (100kW and up) charge points, on the other hand, supply DC (direct current) to your battery.

Your car has both an AC and DC maximum charge rate. They’re completely separate.

Because there are two rates, it’s very easy to connect a charger that your car won’t make best use of. Among other things, this could see you wasting money.

We explain the AC and DC rates, and how you can avoid paying more than you need to in our guide on how to use electric car charging points.