Ever found yourself watching an American cooking show and gazing in awe at the huge chunks of slow-cooked brisket and enormous racks of ribs, wondering how to replicate them at home?

Enter stage right: the smoker. They’re a relatively recent addition to the UK market, but they look set to become increasingly popular in the coming years.

We enlisted an expert chef to test two of the most popular smokers and rate how well they cooked, as well as how easy they were to use and whether or not he’d recommend them. Read on to find out how they fared, as well as some more general info on what to look out for.

Unsure whether a smoker is right for you? Head over to our barbecue reviews instead.

What is a smoker?

Smokers are a means of cooking food at low temperatures over a long period of time – often at least a few hours. They can be powered by a variety of fuels, such as electricity or gas, but mostly commonly some kind of wood or charcoal.

Most smokers maintain a temperature of around 110°C for the best results, but you can usually cook at slightly higher temperatures if you’d prefer.

How are smokers different from barbecues? 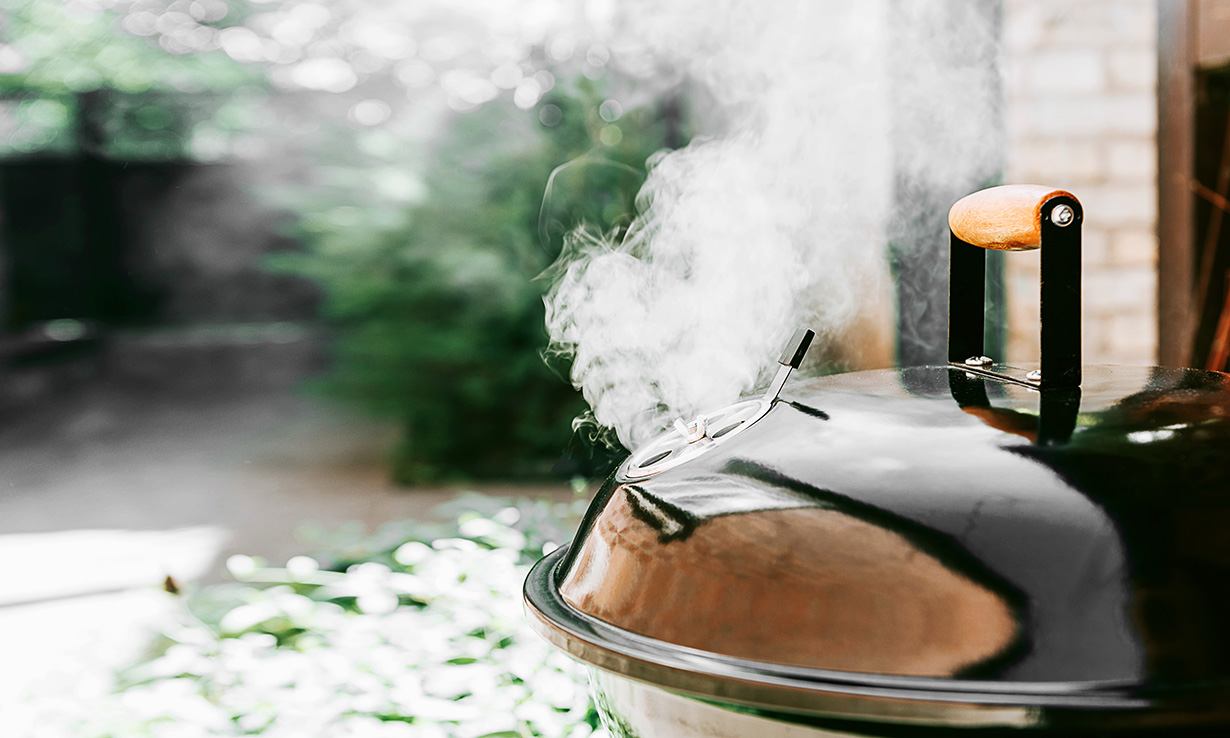 Unlikely barbecues, smokers probably aren’t well suited to an afternoon garden party, mainly due to the sheer amount of time they take to cook food all the way through. They’re also designed for much bigger cuts of meat (think whole chickens and racks of ribs) rather than a few sausages and burgers.

You’ll need to familiarise yourself with the slightly more complex cooking methods too. Instead of firing up the grill and chucking on your meat, you’ll need to work out exactly how much fuel you need to use, as well as keeping the water regularly topped up and checking the temperature.

Smokers also tend to be a little larger than barbecues, so you’ll want to make sure you have enough room to use and store it.

Head over to our guide on how to buy the best barbecue.

How much do smokers cost?

As is the case with barbecues and other cooking appliances, there’s no real set cost for a smoker. While you can get hold of cheaper models for less than £100, there are also many high-end models on the market that sell for in excess of £1,000.

Larger models tend to be pricier, but both smokers we tried out cost less than £500. There are some barbecues that can be converted into smokers. There aren’t many to choose from, but there are definitely some options out there.

We asked one of our expert chefs to try out two different smokers in his garden to tell us what he thought. He assessed each model on a variety of things, including:

He also noted any notable good or bad points, plus any interesting information that could be good to know. 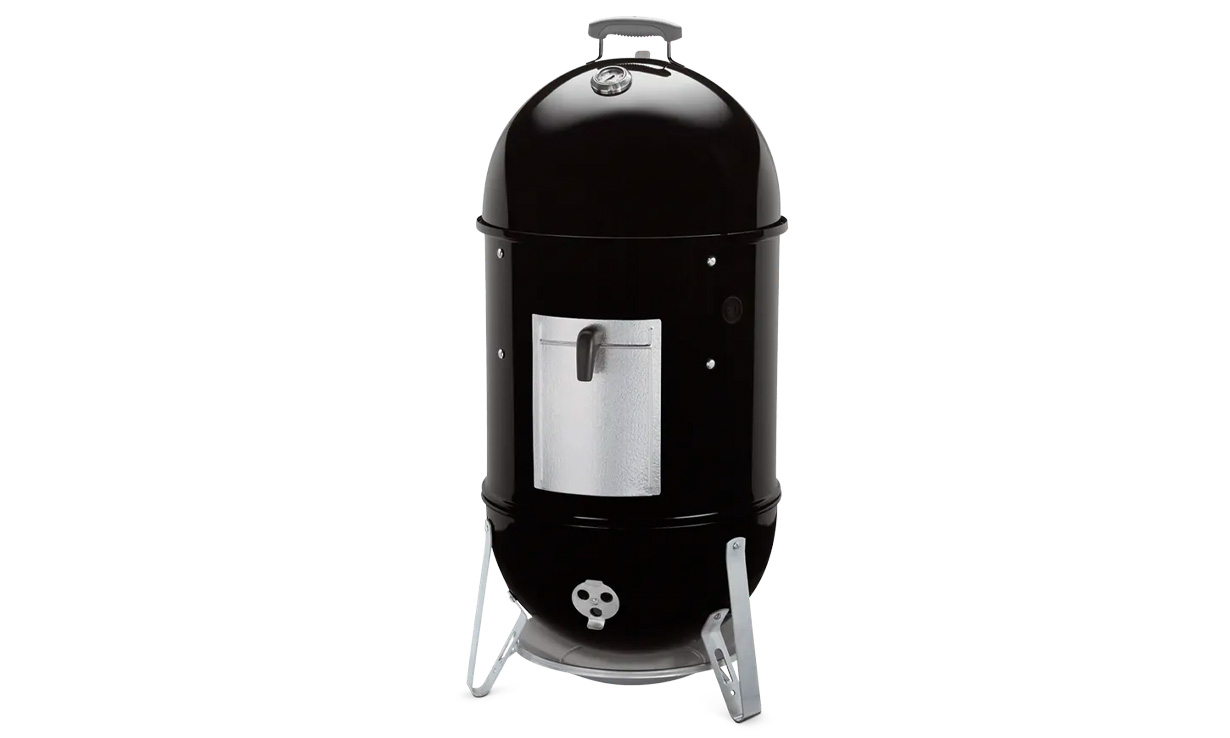 The Weber Smokey Mountain Smoker has a large 47cm-wide cooking area and cooks your food using charcoal briquettes. Our chef confirmed that it was very easy to carry around when not in use, and he noted that the base was nice and wide so the smoker is very stable.

It took just under 20 minutes to reach a suitable cooking temperature of 100°C, and just over four hours to cook a whole chicken all the way through. The chicken was nice and moist with a good smoky flavour, although the temperature was slightly lower than ideal – around 72°C

As the door on this smoker is quite large, you need to take care not to open it too often, as it causes heat to rush out very quickly. It’s also not attached to the body of the smoker, making it quite difficult to fit back in, and the edges are needlessly sharp.

The chef would recommend this smoker to those looking for a simple but effective model. There were a few minor niggles, but nothing to worry too much about. 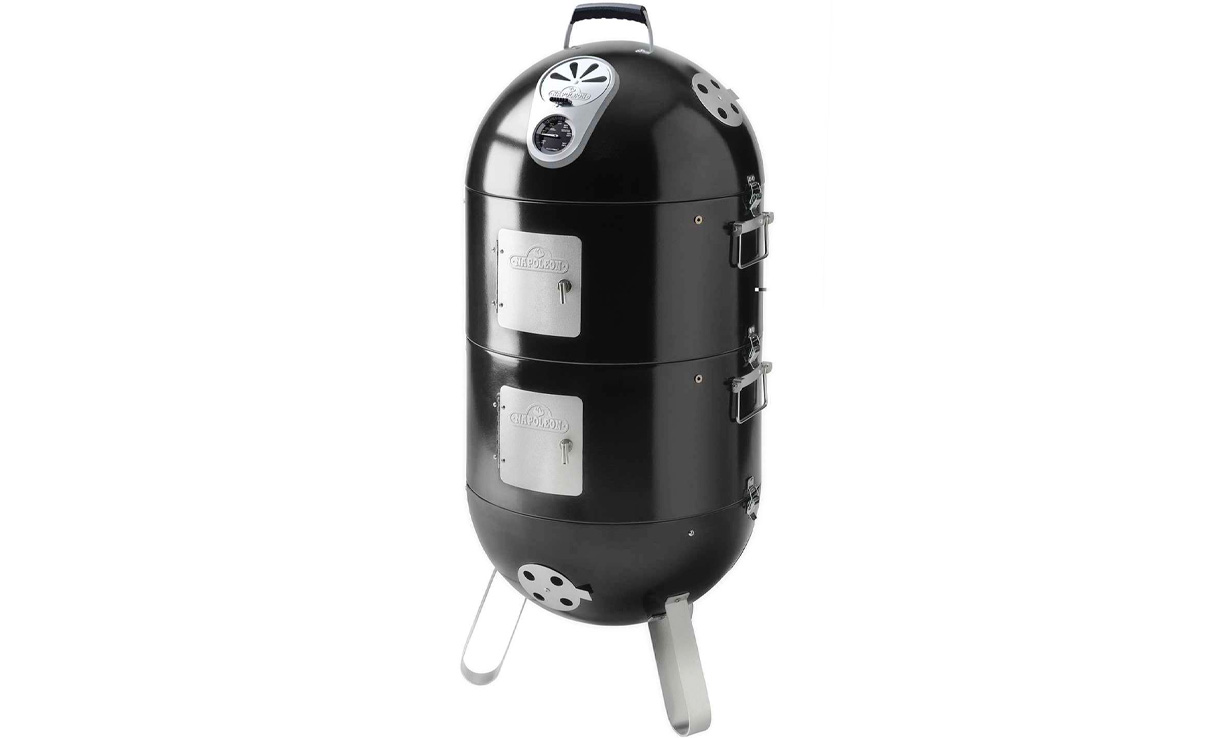 This 3-in-1 Napoleon grill converts from a portable charcoal grill to a full-size smoker in just a matter of seconds. There are meat hooks to hang foods from for smoking, and there’s a built-in temperature gauge to help you monitor your dinner too.

Our expert chef found this smoker relatively easy to light, and there was no flare-up either. It did, however, take an excessively long time to cook our chicken: near enough eight and a half hours. It went through a lot of charcoal and the water needed to be refilled four times too.

Even after almost nine hours of cooking, the chicken was still a little pink and underdone in the centre, but it had also started to dry out in other areas. This was likely because the chicken was hanging very close to the water bowl as it cooked.

Overall, the chef would recommend this smoker to people with big families due to its large cooking area. It’ll likely take some trial and error to get the cooking process right though, and be prepared to wait a long time for the best results.

We sent this Napoleon model to the Which? test lab to test out its barbecue functions. Find out how it fared in our full Napoleon Apollo 300 Charcoal Grill review.