Taxpayers should expect rises for National Insurance and council tax bills, while income tax is frozen, according to today’s Autumn Budget announcements.

Government documents also confirmed that National Insurance rates will rise by 1.25 percentage points from April 2022, a change which was initially announced in September. However, the red Budget book revealed some NI income thresholds are also rising in line with inflation, which means you may be able to keep more money than you might have thought.

Here, Which? reveals how the changes will affect the amount of income tax and National Insurance you’ll pay in the 2022-23 tax year, plus how much your council tax bill could increase by.

The table below shows how income tax is due to change for the 2022-23 tax year.

This means that most people’s income tax bills will remain the same next year.

However, freezing income tax thresholds for several years is likely to increase many people’s tax bills; even small pay rises will see workers pushed into higher income tax bands, causing them to pay more tax on a portion of their income.

The Scottish Budget is due to take place on 9 December 2021.

In this speech, the finance secretary, Kate Forbes, will set out the Scottish government’s spending plans for 2022-23, including any changes to income tax rates and thresholds.

Income tax in Wales has been devolved since 6 April 2019, but the rates and thresholds have so far remained the same as in England and Northern Ireland.

In September 2021, the Prime Minister, Boris Johnson, announced that National Insurance rates would be increased by 1.25 percentage points from April 2022 to bring extra funding to the NHS and to help with the current social care crisis.

This has been confirmed in today’s Budget documents.

For employees paying Class 1 contributions, this is how NI payments will work based on annual earnings:

For self-employed workers, Class 2 weekly contributions will also increase by September 2021 CPI inflation. This means you’ll pay £3.15 a week in 2022-23. 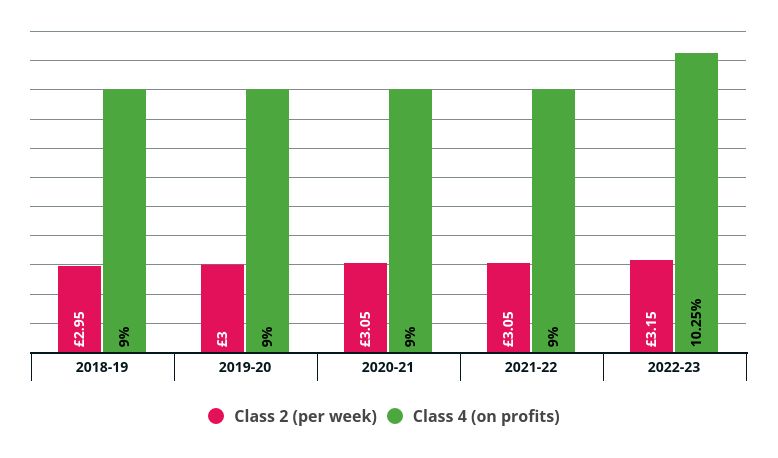 These gaps could affect your state pension in retirement and could also affect your entitlement to some benefits.

Class 3 contributions will also increase in line with September 2021 inflation from 6 April 2022:

How much National Insurance will you pay?

To illustrate how these tax changes could affect how much tax you pay in the 2022-23 tax year, we’ve come up with some worked examples.

Use our calculator below to see how much National Insurance you’ll pay next year; you can also select other tax years from the dropdown menu.

However, this is set to change from April 2023, when the government plans to separate the 1.25 percentage point increase to National Insurance into a new health and social care levy, which will apply to those in work who are above state pension age.

In line with previous years, the Chancellor’s red book stated that local authorities are expected to increase council tax bills by up to 2% in 2022-23 without holding a local referendum.

In addition, any local authorities with social care responsibilities are expected to be able to increase the adult social care precept by up to 1% per year.

Parish councils may be able to put through larger bill increases without the need for a referendum.