While world leaders get settled in at Glasgow’s COP26 conference, we’re turning our attention to the things people at home can be doing to improve our environmental impact – starting with our dinner plates.

Our diets are one place we can all make relatively simple improvements to our sustainability credentials, but after a summer of plentiful seasonal produce, what are the most eco-friendly things to eat in autumn and winter?

Eating locally grown food is often considered the most eco-friendly option. But while it can be a helpful measure, it’s not always a hard and fast rule – as with almost anything sustainability related, the reality is complex. As a whole, transport emissions from food only account for around 10% of its total – the vast majority of carbon emissions are created at the farming stage of the food production process.

When it comes to some carbon intensive products such as red meat, the percentage of emissions involved in transportation pale in comparison to the whole cost of rearing the animal.

For example, previous studies have found that New Zealand lamb imported into the UK can be lower carbon than its UK equivalent because of the farming methods used. Of course, there are plenty of other good reasons to support local, British farmers – but air miles aren’t necessarily one of them. 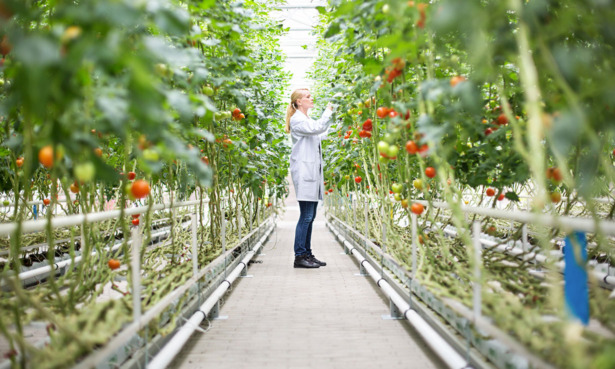 Because fruit and vegetables emit far less carbon at the farming stage, transport does become more relevant when you are deciding where to get your beans or bananas from.

According to Our World in Data, air-freighting accounts for 0.16% of food miles. Foods that are air-shipped tend to be those that are highly perishable such as berries and green beans, which is why it’s all the more important to buy these when in season in the UK, and avoid buying them fresh at other times of year.

A more sustainable alternative is buying frozen or buying them fresh when in season and freezing them yourself.

It’s also important to consider that buying some fruit and veg locally but out of season can be more carbon intensive than shipping your food from abroad. Tomatoes and lettuces grown in heated greenhouses in winter in the UK are more carbon-intensive than their equivalents from Southern Europe, where outdoor growing seasons are much longer.

But there are some genuinely sustainable winter fruit and veg that you can buy locally and know they are seasonal too.

The fruit and veg to buy now 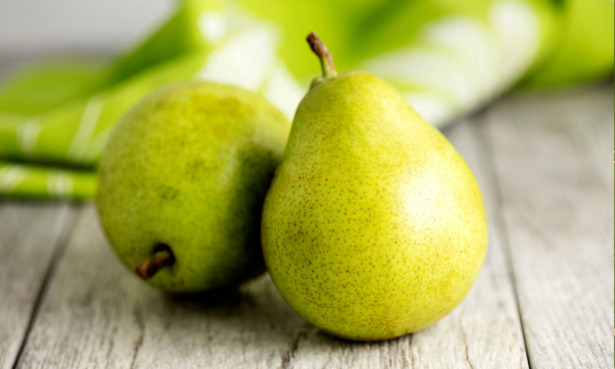 The main harvest season for pears starts in October so now is the perfect time to enjoy this fruit.

If you live in the South-East you should be able to buy your pears particularly locally, as Kent is home to most apple and pear orchards.

Orchards are important for biodiversity. And because orchards rely on insect pollinators, orchard growers are often great promoters of bees. 70% of growers surveyed by British Apples and Pears for its sustainability report said they also produce honey in their orchards.

You’ll be able to buy some British varieties of pears almost year round. This is because they can be cold stored in packhouses. While this does increase the carbon emissions – because of the energy required to refrigerate the fruit – over 60% of storage facilities questioned by British Apples and Pears said they generate at least some of their energy from solar panels. 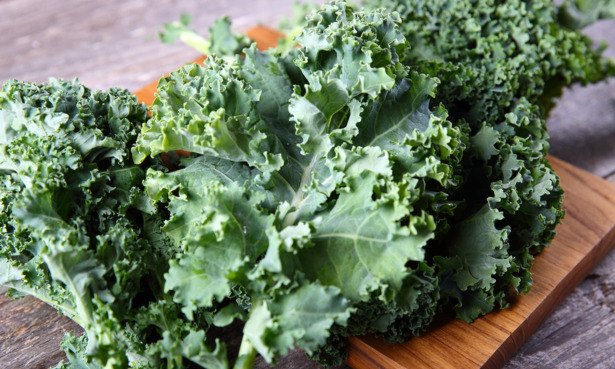 Darling of the super-food advocates, kale is packed full of vitamin C (four times that of spinach), a powerful dose of vitamin A and a lot of vitamin K (which helps maintain normal blood clotting), as well as a plethora of other vitamins and minerals.

A member of the brassica family, kale is easy to grow yourself from seed and can survive most cold winter temperatures – a highly sustainable option if you have an outdoor space to grow it in.

Commercially, it can be grown and harvested in the UK year round, aside from a short gap where it is reseeded in the spring. 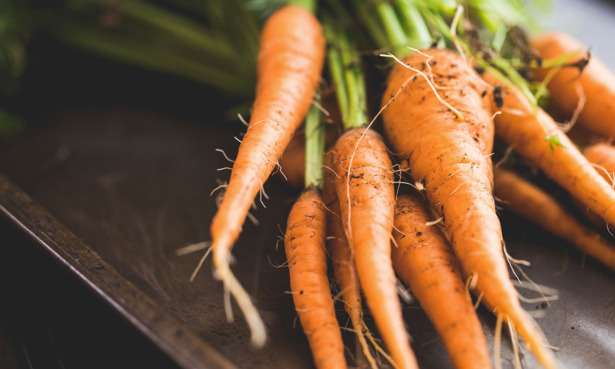 Carrots are a star crop for being available to harvest nearly all year round in the UK, depending on the location and variety. Different parts of the country have different seasons, but commercial carrot growing takes place across the UK, including in Scotland and Suffolk.

Carrots require some irrigation and some fertiliser but, on the whole, are a low emissions crop. Sarah Bridle, author of Food and Climate Change Without the Hot Air, says most of the climate cost of carrots is encompassed in cooking them. So for the most climate-friendly option, eat them raw. 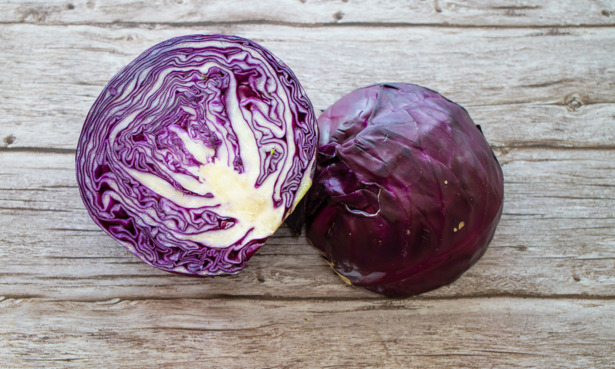 A 2019 University of Manchester study (Frankowska et al, 2019) carried out a full life cycle assessment of 21 vegetables bought in the UK and ranked them by most sustainable. Cabbages took the top spot.

They need little input at the farming stage, are grown outdoors, can be transported without plastic packaging and also don’t need to be cooked for long – something that adds significantly to the environmental impact of some root vegetables such as squash and potatoes.

The UK is almost self-sufficient in cabbages, particularly when it comes to the more common varieties – red and white cabbage. They are mainly grown in Lincolnshire and Cornwall, depending on the time of year.

These varieties are harvested from June to December so have a particularly low environmental impact at this time of year. The rest of the year they are kept in cold storage.

Other brassica such as cauliflower and kale are grown outdoors nearly all year round. UK-grown sprouts are available in the UK from July to April.

Broccoli has a shorter UK season and is imported for over half the year as it can’t be as easily stored. 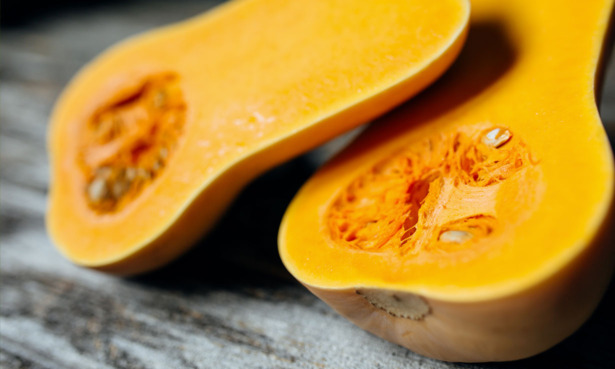 Halloween may be behind us and the carved pumpkins in the compost/food waste bins, but there are plenty of other members of the squash family to sustain us through the winter.

If you grow your own squash, you should leave the fruit in the sun or in a greenhouse for 10 days after harvesting to thicken the skin. Commercially grown squash go through a forced air drying process to cure them too, which requires energy but also significantly increases their shelf life.

Squash should be kept in a cool, dark place (no need to refrigerate). Some varieties will last from harvest time (September/October) until the following spring.

Butternut squash has a slightly shorter shelf life – up to three months.

The UK still imports much of its squash so make sure to look for British produce.

Read our guide on growing your own squash.

The benefits of batch cooking

Cooking in bulk is a sustainable way of cooking and also suits hearty winter meals such as stews, soups and casseroles. It can be a great way of reducing food waste.

The Waste and Resources Action Programme (WRAP) found that during lockdown food waste decreased by 43% and put this partly down to people batch cooking and then freezing portions of food.

It saves time in the long run and ensures you have ready access to healthy and comforting meals.

Slow cookers can be a really useful kitchen aid if you are keen to batch cook. Find out more in our guide to how to buy the best slow cooker.

Head to our sustainable living advice for more eco-friendly tips, including how to buy sustainable fish and how our tasting panel rate the best vegan and vegetarian sausages.