How we test electric showers

We rigorously lab test each electric shower we review, so that you can be confident that only the most reliable and consistent models earn our Best Buy recommendation.

Below and in the video above we explain how we test electric showers, more about the difference a Best Buy electric shower will make to your shower each morning, and how our reviews help you avoid one that could leave you exposed to scalding and freezing temperatures if someone uses the mains water elsewhere in your home.

Each of our electric shower reviews answer your key questions.

Only showers that excel in all these areas earn our Best Buy electric shower recommendation.

How much hot water will the electric shower deliver?

The more water an electric shower can heat in one go the better, as it will help you wash the shampoo from your hair more quickly. So to find the models that will make your morning shower speedier, we rig each shower up in our test lab, set it to the highest power setting and measure how much hot 40°C water is delivered through the shower head.

Showers range from around 8.5kW to 10.5kW in power, and in general the higher the wattage the more hot water the shower can produce. But our tests have found a difference in the amount of hot water showers of the same wattage can produce.

Does the electric shower’s water temperature rise when someone runs a tap nearby?

Most electric showers regulate the water temperature by balancing the pressure of the heated water in the shower unit with the pressure of the cold water coming in from the mains. So when this incoming cold water flow suddenly decreases because someone has used mains water elsewhere in your home, there’s a disproportionate amount of hot water in the system, which can cause the shower to get uncomfortably hot.

To see which models keep the temperature steady and which creep up to scaldingly hot levels, we ran a nearby tap in our test lab for 30 seconds and tracked the temperature of the water from the shower. The best showers barely changed in temperature, meaning you won’t be in for a nasty shock if someone runs a tap elsewhere in your house while you’re showering.

But it was a different story with some: the temperature of the worst model spiked at 55°C, which we think you’d find painfully hot.

The worst shower reached a scaldingly hot temperature of 55°C in our test lab.

Does the electric shower’s temperature drop when the mains water is used while you’re showering?

All electric shower have a safety feature which cuts power to the heating element if it gets too hot. If this kicks in because the mains water has been used at the same time and the shower temperature has risen, the shower will stop heating water and the temperature will drop.

During our shower tests, we measured how far the temperature drops before the system recovers and the water starts to get hot again – and the results varied hugely. The temperature of some models barely changed, but the worst plummeted down to an icy 11°C. Shower using one of these dreadful models and you’d find your lovely warm shower becomes a freezing cold deluge - we think you would have to duck out of the shower while you wait for it to warm up.

We only award our Best Buy shower recommendations to models that protect you from big drops in temperature.

The best models will restore power to the element before the water gets too cold, but the worst take ages to recover, turning your shower icy.

How long does it take for the shower temperature to return to normal following a temperature drop?

To help you see which electric showers get back to normal original temperatures quickly following a temperature drop – as well as the ones that don’t impress by taking ages to recover – we time how long it takes for each shower to return to within 3°C of the 40°C starting point.

Our electric shower reviews will help you spot the showers that won’t cause you to stand out of the shower for long if the temperature changes, as well as the mediocre models that will leave you huddling out of the shower’s spray for ages to avoid an icy downpour.

How easy is the electric shower to install, use and clean?

Some electric showers are simple to install; others are tricky, come with inadequate instructions and mean you’ll have to drill new holes to fix the riser rail in place because the brackets aren’t adjustable. When we test showers we install each one in our test shower cubicle and rate how easy it is to fit.

We also rate how easy each shower is to use, from whether the display symbols are simple enough for your guests to interpret straight away to how easy is it to turn the dials and adjust the height of the shower head. We can also tell you which showers are easier to clean than others, and whether any models are likely to set your teeth on edge due to the loudness and pitch of their running noise.

Should I buy this electric shower?

How an electric shower fares in each of these tests contributes to its overall Which? test score. But some tests are more important and so carry more weight than others. The overall score ignores price and is based on:

An electric shower needs to score 75% or above to be a Best Buy.

To make the grade as a Best Buy, an electric shower much score 75% or more in our tough tests. Our reviews also reveal whether we think each shower is worth buying, to help you avoid forking out hundreds of pounds on a shower that lets you down. 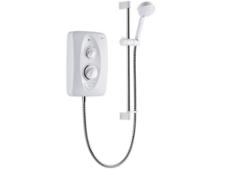 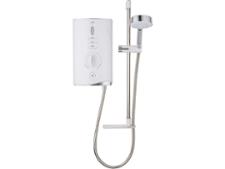 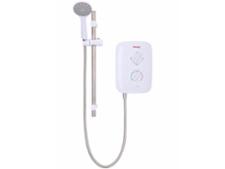