What is Apple Pay?

Apple Pay is a digital wallet that lets you pay for goods by moving your iPhone over a contactless reader, removing the need to use a physical card or enter a Pin.

Anyone with an iPhone 6, iPhone 6 Plus, or an Apple Watch linked to an iPhone 5 or above can use it. See the full list of compatible devices.

Google Pay (formerly known as ‘Android Pay’), is a similar mobile payments system that works on Android devices and some Android-based smartwatches.

Apple Pay appears to be at least as secure as contactless payments:

When you add a card, its details are encrypted and stored only on your iPhone, not on Apple's servers.

Apple replaces your card's details with something called a device account number (also called a token) which means the real information is never shared during purchases.

A passcode and Apple's fingerprint-recognition (Touch ID) or facial-recognition (Face ID) technology adds another layer of security. On Apple Watch, wrist detection must be enabled.

If you lost your phone or it was stolen, you could stop payments by logging in to Apple's iCloud or by putting your device into 'lost mode' via the 'Find My Phone' app.

Does Section 75 apply to Apple Pay?

Yes, provided the card in your virtual wallet is a credit card and you paid for goods costing between £100 and £30,000, you are covered by Section 75 if something goes wrong.

For example if the goods are faulty, or you don’t receive them, you can claim the cost back from the card company.

The only time Apple and Google Pay aren’t covered by these protections is when you’ve used an intermediary card, such as Curve, to make your payment.

Find out more: Why Apple Pay and Google Pay are the safest ways to spend

How to set up Apple Pay

To use Apple Pay, open the pre-installed Wallet app and add the payment cards you want to use on your device. You can use the iPhone's camera to capture the card details quickly, adding up to eight cards on any Apple device.

Your 'default' card is the one you plan to use most often but switching to a different one is very simple:

Find out more: Latest Apple iPhones reviewed by Which?

Your phone doesn't need to be connected to the internet to make a payment in-store.

Since your card details are stored securely on your iPhone or Apple Watch, you only need to hold it close to the contactless reader, just as you would if you were paying with a contactless card. A vibration will confirm that a payment has been made.

If you're using an iPhone you'll be required to use Touch ID when making a purchase. If the phone doesn't recognise your fingerprint, then the transaction won't go through.

Apple Watch doesn't require you to do this, meaning you have to just place your watch next to a reader to make a payment.

Shops will be able to refund any purchase made with Apple Pay under the same terms as paying with a physical card (cashiers may ask for the last few digits of your Device Account Number to process returns).

If you need a receipt, ask for one, just as would when paying via credit or debit card. You'll be able to view your most recent transactions for each card in the Wallet app.

You can also pay for goods on the web in Safari using an iPhone, iPad, or Mac. For Macs without Touch ID, make sure you've turned Bluetooth on.

Apple Pay will store your billing, shipping, and contact information so you won't need to enter it again.

A growing number of smartphone apps also accept Apple Pay. Look for the logo at the checkout to see if Apple Pay is one of the payment options. 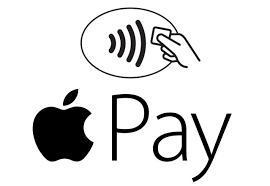 How much can I spend using Apple Pay?

In the UK, you can 'tap and pay' for goods worth up to £30 using a contactless credit or debit card but Apple Pay (and other digital wallet) users can exceed this limit, if the retailer allows it.

Some retailers will let you spend any amount using Apple Pay while others will impose the £30 contactless card limit and ask for Pin authentication above this.

Read more about which high-street retailers have higher limits in our news story.

Apple Pay transactions made in-app and using a Safari browser have no limit.

It should work on the Transport for London (TfL) network, and at any shop that accepts contactless payments, including major retailers such as Boots, M&S, the Post Office, Starbucks and Waitrose.

Apple Pay also works within selected apps and at participating retailers on the web using Safari – by tapping the Apple Pay button, or choosing Apple Pay at the checkout.

The app stores your billing, shipping, and contact information so that you only need to enter this information once.

Which banks support Apple Pay in the UK?

When Apple Pay launched in the UK in July 2015 it already had the backing of most of the major banks, although Barclays only started supporting it in April 2016.

All of the digital first current account providers support Apple Pay in the UK, including Monese, Monzo, Revolut and Starling Bank. Read about these providers in our challenger and mobile banks guide.

Here is a full list of the banks, building societies, credit card companies and prepaid card providers that support Apple Pay in the UK:

Barclays has its own cardless payment system called bPay. Using either a wristband, a sticker for your mobile phone or a fob key, you can add money to each device and use it to pay via a contactless reader.

Which? Limited is registered in England and Wales to 2 Marylebone Road, London NW1 4DF, company number 00677665 and is an Introducer Appointed Representative of the following:

LifeSearch Partners Limited (FRN 656479), for the introduction of Pure Protection Contracts, who are authorised and regulated by the Financial Conduct Authority to provide advice and arrange Pure Protection Contracts. LifeSearch Partners Ltd is registered in England and Wales to 3000a Parkway, Whiteley, Hampshire, PO15 7FX, company number 03412386.