What is a state pension forecast?

The state pension forecast will give you an idea of how much your payments will be when you become eligible for it.

You can still get a paper state pension forecast from the Department for Work and Pensions (DWP), although people are encouraged to go online to get the information using the Check your State Pension service.

The online service will also provide information about how you can increase your state pension, if you can.

What does a state pension forecast show?

The estimate of what you can expect in terms of your state pension is based on your National Insurance contributions, the number of full years you’ve accumulated and any additional state pension you’ve built up.

Check your State Pension is accessed using the Government Gateway. The results page will provide you with the following information.

There are caveats outlining that the estimate is not a guarantee and is based on the current law, and does not include any increase due to inflation. 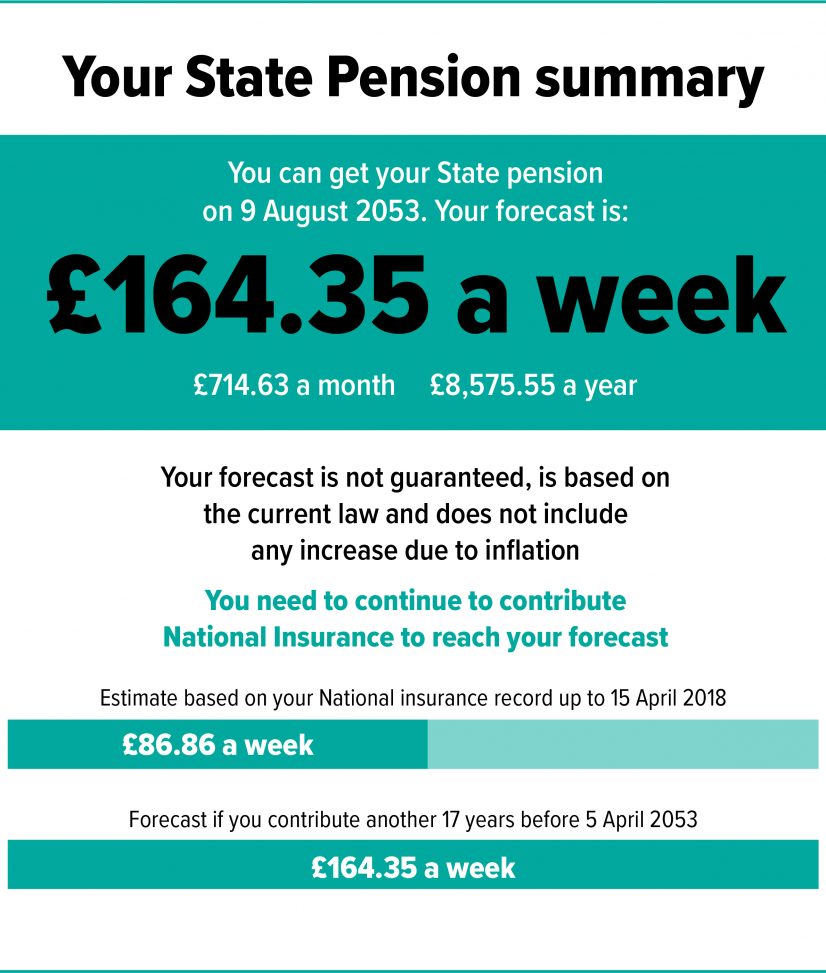 What is the Contracted-Out Pension Equivalent estimate?

Forecasts from the DWP include an element entitled the 'Contracted-Out Pension Equivalent', or COPE.

So you won’t get this as part of your state pension, but should get it instead from your workplace or personal pension scheme for the periods you were contracted out.

This is clearly quite a broad estimate and the exact amount your scheme will pay you as a result of contracting-out as it will depend on the actual rules of your private scheme, and possibly any investment choices you may make.

Information about COPE looks like this in your pension forecast:

Is my state pension forecast accurate?

The state pension forecast can give you an idea of what to expect, but it isn’t perfect.

Part of the problem is that the relevant agencies - HMRC, the Department for Work and Pensions and private or workplace pension schemes aren’t always ‘joined up’ with the sharing of information, which can limit the effectiveness of the forecast.

Data provided to the government about your contracting-out history may not be up-to-date, and therefore the value of your COPE payments may be calculated using incorrect rates.

The issue of making the forecast as accurate as possible, particularly with regard to how much less you’ll get if you’ve been contracted out for a significant period, still needs to be addressed.

Plans by HMRC to send out information to millions of people who were contracted out between 1978 and 1997 were abandoned at the end of 2017.

However, private and workplace pension schemes are current undergoing the process of matching up their data with HMRC's.

How do I get a state pension forecast?

You can also complete an application form (BR19) and send it to the Future Pension Centre to get a state pension forecast. Application forms can be downloaded from GOV.UK.

You'll get your statement within 10 working days.

The Check your State Pension service is accessed via the Government Gateway.

You’ll need a Government Gateway account to check your state pension forecast online - you’ll be able to set one up if you don’t have one (you’ll need your National Insurance number).

The perks and benefits of being retired
Which? explains the benefits of being retired and the perks on offer from the state and elsewhere.
FOLLOW US ON
Latest pensions & retirement news
Six things to know about your state pension if you want to retire abroad
Divorced women face unstable retirement as pensions left out of settlements
What do you need to do to retire early?
Six pension must-dos for 2022