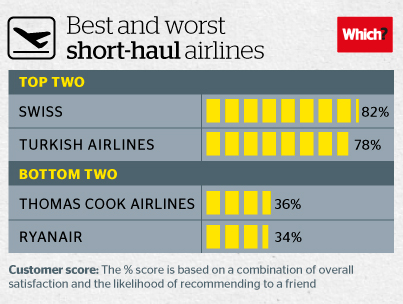 Swiss International Airlines is top of the table for short-haul airlines in the new survey for Which? Travel, with a customer score of 82%. Turkish Airlines, Lufthansa and Aer Lingus are close behind.

But bottom of the pile is Ryanair, which achieved a score of only 34%. It scored particularly poorly for its baggage allowance, boarding arrangements, seating allocation, food and drinks, with only a one-star satisfaction rating in each of these categories.

Which? members can see the full table of results for all 16 short haul carriers, and all 23 long haul carriers featuring in the airlines survey, including British Airways, EasyJet and Virgin Atlantic.

The only direct flights from the UK with Swiss are to Switzerland from Birmingham, Heathrow, London City and Manchester. It is the only airline to receive five stars for its staff, who received praise for their politeness and great service.

Turkish Airlines, which achieved a customer score of 78%, flies from several UK airports to Istanbul. Lufthansa and Aer Lingus received customer scores of 75% and 74% respectively.

Ryanair is bottom of the airlines survey for the first time, with its lowest customer score to date. Many respondents commented about its extra charges, with more than a quarter of people who bought a flight on the Ryanair website saying they were automatically opted in to extra paid-for products they didn’t want – far more than for those booking with other airlines.

Thomas Cook Airlines narrowly missed out on being the lowest-scoring airline for the second survey in a row, with a paltry customer score of 36%, and a rating of just one out of five stars for the cabin environment.

A Which? spokesperson said: “The airlines topping our survey received flying colours for their good customer service and value for money. No-frills airlines will have to do more to cut down on the extra charges for baggage allowance, seat allocation and food and drink if they’re to see their ratings really take off.”

Air New Zealand achieved the top score (86%) in the table for long haul airlines, with a maximum five stars in several categories including for airline staff. Singapore Airlines also did well, scoring 83%, while Middle Eastern carriers Etihad Airways and Emirates had customer scores of 84% and 81% respectively.

To produce customer scores for each airline, we asked Which? members how satisfied they were overall with the experience and how likely they were to recommend it to a friend.

Each airline was also rated on elements such as value for money, punctuality, the cabin environment and the airline staff.