A small airline serving the Channel Islands has beaten the big names to come top of the short haul airlines table in the latest Which? survey. 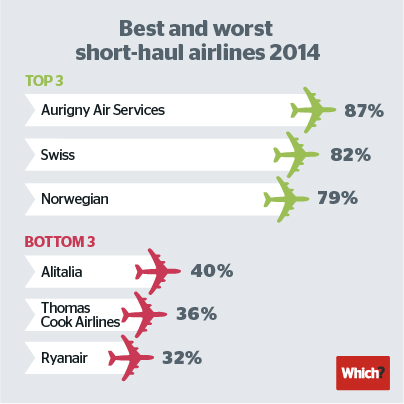 In a poll of more than 12,000 passenger experiences, Guernsey-based Aurigny Air Services fares better than the other 21 short haul airlines featured, achieving an impressive customer score of 87%. Ryanair is grounded once again at the bottom of the short-haul airlines table, with a measly customer score of just 32%.

Iberia, the Spanish partner of British Airways, lands at the bottom of the long-haul table, receiving an even worse customer score of 28%.

Our annual survey, which will be published in the January 2014 issue of Which? Travel, has revealed the best and worst airlines to travel with whether you’re flying long or short haul.

You can see how airlines such as British Airways, EasyJet, Monarch and Thomson Airways compare in our full survey results of 22 short haul airlines and 24 long haul airlines.

As well as having the highest customer score, Aurigny has achieved four stars for its boarding process, leg room and seat comfort, punctuality of flight and aircraft cleanliness and temperature.

Norwegian Air Shuttle ASA zooms into the top four with 79%, appearing in our results for the first time. Offering non-stop flights to Scandinavia and other European countries, it has recently added Gatwick as a base, from where it will also launch transatlantic flights in summer 2014.

Ryanair was bottom of the short-haul rankings in our last annual airlines survey, and the pattern has continued this year. The Irish carrier also scrapes a one-star rating for luggage allowances, boarding process, leg room and the quality of food and drink. It had already come last out of 100 brands in a separate customer service survey by Which? this September.

However, since both surveys were carried out, the airline has announced some changes including a move to allocated seating and a reduction in baggage fees from January next year.

Air New Zealand and Singapore Airlines come joint first in our table of results for long-haul flights, with a customer score of 87%. Both of these partners within the Star Alliance group also scored highly in our previous airline survey and this time around can boast an impressive maximum five stars for in-flight entertainment, food and drink, punctuality of flight and value for money.

At the other end of the table, Iberia has the lowest customer score, only receiving a one-star rating for food and drink.

Which? executive director Richard Lloyd, said: ‘Our survey reveals the massive variation in the standard of airlines. Once you’ve chosen your destination, it pays to pick the airline that will get you there without any dramas.’

You can see how each of the 41 airlines performed in the full tables of survey results – these include ratings for hand luggage and hold allowance, leg room and value for money.