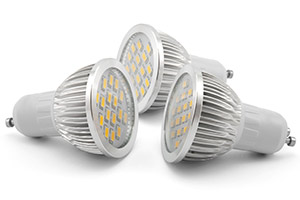 LED spotlights can cost between £4 and £20

The latest Which? tests have uncovered a crop of bright and efficient Best Buy LED spotlights – and the good news is that the best on test only costs £5 to buy.

Which? members told us that they wanted us to test spotlights so we sent 23 of the best selling GU10 fitting LED and halogen spotlights to the lab to see how they stacked up against each other. You can read full results including our Best Buy spotlight recommendations in our spotlight reviews section.

Although a survey of 1,032 Which? members in May 2014 reveals that halogen remains the most owned type of spotlight with 43% owning a halogen spotlight compared to 28% who own LED spots; more and more are now making the switch to LED.

LED spotlights are far more efficient and consistently outshine halogen spotlights on several key tests including how closely the brightness and beam angle matched the claim on the box.

LEDs are a lot more expensive to buy, but they are an awful lot cheaper to run. A typical spotlight fitting that is on for two hours a day and contains six 50w halogen spots will cost £36 a year to run. Swap the halogens for the £5 Best Buy LEDs that produce the same amount of light and it will cost just less than £4 a year.

In the above example, assuming the halogen bulbs cost £2 each you would see a return on your investment in less than seven months at which point you will be saving £32 a year on just one light fitting for as long as the LEDs last.

Our spotlights test uncovered three Best Buy LED spotlights overall, all of which are as bright as an old-style 50w incandescent bulb. To find out which ones are best Which? members can take a look at our spotlights rated table. If you’re not a member, you can unlock all our online reviews from light bulbs to vacuum cleaners by taking out a subscription to Which?

LEDs also claim to last a lot longer than halogens, with some manufacturers claiming their spots will last 25 years compared to halogens that typically last for about two years. It is difficult to test this claim in our lab as it would take three full years to test the 25 year claim of LED bulbs, by which time they may not still be available to buy.

For now, what we do know is that only 4% of our LED spotlights failed after a simulated two years compared to 27% of the halogen spots.

If you like to dim your lights or have spotlights on an existing dimmer circuit you’ll want to know if you can replace halogen like-for-like with LED. Not all LED bulbs can be dimmed on dimmer circuits and even some LEDs that say they are dimmable on the box do not work on older dimmer switches.

Our advice is to double check with the manufacturer (some manufacturers put this information on their websites) or an electrician before adding LED spots to an existing dimmer circuit.