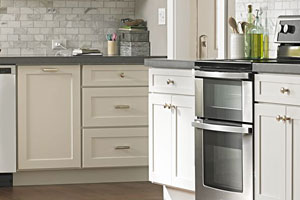 We’ve put 10 freestanding cookers from well-known brands head-to-head in our latest batch of testing. They include gas and electric models with single and double ovens, and one cooker with an eye-level grill.

Cookers with double ovens are an increasingly popular choice – well over half of Which? members go for this option when buying a new cooker – so eight of the cookers in our latest tests have two ovens.

Models from Belling, Hotpoint, Zanussi and more have been put through a series of rigorous tests that challenge their ability to simmer, fry, grill and bake.

Find out which models from the latest testing we recommend by heading to our freestanding cooker reviews.

Two of our most recently tested cookers are from Hotpoint – but more than £500 separates the two. While both have two ovens, there the similarity ends. The pricier (£848) has electric ovens and an induction hob, while the cheaper (£313) is an all-gas cooker.

Also on test is a double oven from Belling that costs a very reasonable £449. The question is, must you spend £850 if you need a cooker with a double oven, or can you get good results from a much cheaper option?

Which? cooking appliances expert Jane Darling said: ‘We’ve found numerous cookers that will simmer perfectly and several that make excellent sponge cakes. But others are less impressive, such as the oven we set at 180°C and it only reached 137°C, and a grill that struggled to cover even a third of the grill pan.

‘You don’t always get great results from an expensive cooker, but sometimes it is worth shelling out more if it’s really top quality. Our results will guide you to the best cookers out there.’

Eye-level grills are few and far between, but if this is a feature you’d like your new cooker to have then find out if the single gas cooker has done well enough in our tests to be awarded Best Buy status.

The best grills spread heat out evenly over 90% of the grill pan, while the poorest we’ve come across leave more than half of your bread un-toasted, so you end up having to move food around to get even browning.

Below is the full list of the ten freestanding cookers in our latest test (prices typical as of 4 April 2015).