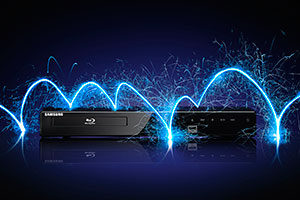 Looking for a new Blu-ray or DVD player? Our latest group test features models to suit a range of needs and budgets, including the latest disc-spinners from Samsung, LG, Sony and Panasonic, plus a Yamaha model that plays discs from any country. We’ve uncovered four new Best Buys worthy of any TV boxset and film collection – and a spot on your shopping shortlist.

Our team of experts recently tested a dozen Blu-ray players, priced from £45 to £450, to assess picture and sound quality, ease-of-use, start-up and disc loading speed, power use and features.

The best models not only treated us to a fantastic Blu-ray picture, they also delivered great sound, had good features and weren’t overly noisy when playing discs. But it was a 4K upscaling Blu-ray player that costs at least £200 less than the most expensive model that came top of our latest group test. Leaving no stone unturned, we spotted some models that met those benchmarks but failed to impress when playing 3D Blu-rays or streaming internet video from BBC iPlayer.

Cheap and curved pitted against premium but pricey Blu-ray players

Style, as well as price, varied considerably. Among the models in our latest test was a choice of colours – black, white, silver and titanium, the curved bodies of the Samsung BD-J5500 and BD-J5900 to suit Samsung’s new curved 4K Ultra HD TVs, and stylish large premium decks, such as Panasonic’s flagship DMP-BDT700, which costs £450.

Putting style aside, only the most high-performance Blu-ray players are awarded our Best Buy rating. And the latest tests reveal some that don’t offer value for money.

As 4K (Ultra-HD) TVs have become more popular and dropped in price, ‘4K upscaling’ Blu-ray players have started to appear. True 4K-quality discs aren’t yet available – new Ultra HD Blu-ray discs and players may be launched around Christmas 2015 – but these players can upscale Blu-ray discs to display on a 4K TV at four times the quality of Full HD (1080p). They’ll also play the few ‘Mastered in 4K’ discs that are available, which have been optimised for 4K-upscaling models.

In our latest batch, we’ve tested five players capable of 4K upscaling, with the Samsung BD-H7500 going up against Panasonic’s DMP-BDT700, DMP-BDT170, DMP-BDT270 and BDT370. Click on the links below to find out how they compare to each other and models tested last year, such as the Samsung BD-H6500 and Panasonic DMP-BDT460.

Which Blu-ray players have we tested?

The Blu-ray DVD players we’ve just tested are as follows: