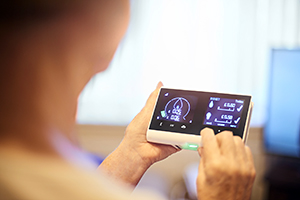 Smart meters are estimated to save less money than previously thought

The estimated savings that each household could make once smart meters have been installed across the UK is less than half of what was previously predicted, according to a new government report.

The annual dual-fuel energy bill for each home is said to drop by an average of £11 by 2020, less than half of the previous estimate of £26.

The decrease in potential savings is partly down to an increase in the cost of setting up the smart meter network. It’s also down to the estimated cost of a dual fuel bill being revised – the new report estimates it will be £200 less on average per year.

The smart meter roll-out is now estimated to cost £54m more than the £11bn previously forecast, and benefits to consumers have dropped by £415m overall.

Smart meters measure your energy use and send your energy usage information to your supplier via wireless networks, so you won’t need to take manual meter readings.

As part of the roll-out, you will get an in-home display (IHD) with your smart meter, which shows how much energy you use in real time.

Smart meters are expected to reduce your energy costs because they’ll enable you to keep a better eye on your energy consumption and get more accurate bills.

How much you could save depends on whether you use information from your in-home display to reduce the amount of gas and electricity you use.

Suppliers are also expected to pass on the savings they make from not having to visit properties for meter readings, handling fewer customer calls about inaccurate bills, and better theft detection.

So far, all of the smart meters that have been installed are first-generation meters (SMETS1), which are only able to connect with some energy suppliers.

This means that if you switch supplier, your new provider might not be able to support your smart meter, so you may have to go back to sending manual meter readings.

Second-generation smart meters (SMETS2) will be able to connect to all suppliers. These rely on the launch of a wireless network, owned by the Data and Communications Company (DCC), which was plagued by delays but is now live.

These delays mean that millions more consumers will have SMETS1 smart meters than originally expected, which could make switching energy supplier more difficult. We have heard from a number of Which? members who have had this problem.

Save on your energy bills

Smart meters should save you £47 on your energy bills by 2030, the government expects.

But you could save up to £262 now, by switching from a pricey dual fuel tariff to the cheapest deal on the market. It’s always a good idea to make sure you’re on the best tariff possible, so you’re not paying over the odds for your gas or electricity.

You can use our independent comparison site, Which? Switch, to find the best energy deal for you.