When it comes to laptops, battery life can be a key buying decision. But Which? has discovered that the battery life claimed by laptop manufacturers rarely lives up to reality, with our tests finding it often falls drastically short.

Which? testing has shown that almost all laptop manufacturers overstate their battery claims. In some cases, the battery life estimates were double what we achieved in our lab testing.

Laptop reviews – Read our latest laptop reviews, from brands such as Apple, Dell, HP and Lenovo.

We’ve compared the stated manufacturer claims against our laptop tests over the past year, comparing 67 models. Overall we found that manufacturers are missing their claims not by minutes, but by hours. The most optimistic laptop manufacturers are overstating their battery life by 50% or more, leaving you searching for the power cable twice as often as you’d expect.

It’s not all bad news, however – our tests found that with Apple MacBooks, you could meet or even exceed the claimed battery life, according to Apple.

Laptop batteries: What we found 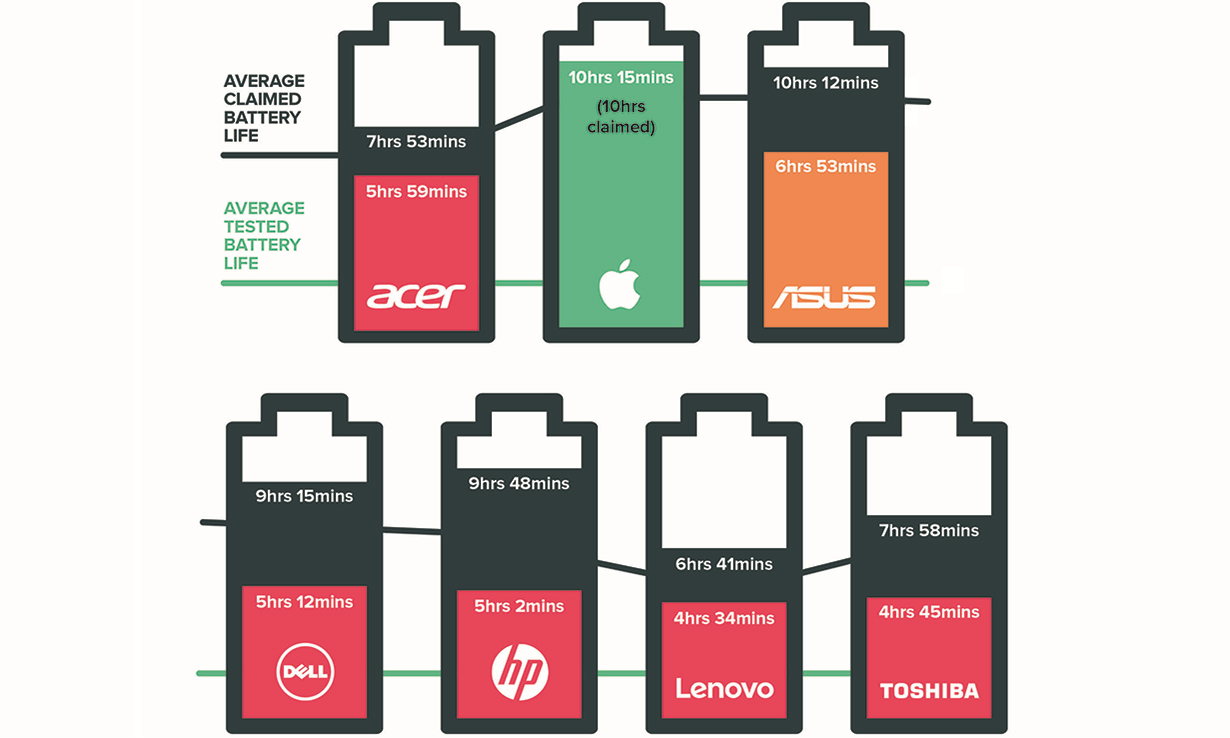 We test laptops for battery life while actively browsing the web over wi-fi, running the laptop in this fashion until the battery is fully drained. In the graphic above, we show the average claimed battery life for all the laptops we’ve tested since January 2016, versus the average battery life in our tests. Number of laptops tested: Acer (8); Apple (3), Asus (8), Dell (10), HP (12), Lenovo (20), Toshiba (6).

On a budget? Find out the best laptop deals right now.

The Which? battery test

Each laptop we judge goes through our battery tests at least three times. We don’t simply trust battery capacity claims: we actually drain the whole battery from start to finish, several times over, during various tasks. One test involves watching films until the battery finally shuts down, another continually browsing websites over wi-fi.

We believe that that these tests are representative of the real world use that a laptop would get. As the figures we arrived at are often drastically different to the manufacturer claims, we have to wonder how their own estimates are arrived at.

Below are some examples of the sorts of discrepancies our testing unveiled:

Which? reached out to laptop manufacturers and asked why there were such big differences in their claims and our findings. Dell told us ‘It’s difficult to give a specific battery life expectation that will directly correlate to all customer usage behaviours because every individual uses their PC differently – it’s similar to how different people driving the same car will get different gas mileage depending on how they drive.’

HP said that is battery tests ‘uses real life scripts and runs on real applications like Microsoft office.‘, and that the exact specifications, such as screen resolution, will impact the results for each model.

Dell, HP and Toshiba have told us that they also use an independent benchmarking program called MobileMark to help them calculate their battery claims. But Which?’s figures are based on the real-life scenarios tested in our lab, rather than benchmarking software. We can confidently tell you how long your battery life will really last in real-world use, because we’ve tested every model we review while actively browsing the web and watching videos.

It’s vital to look past manufacturer claims and dig a little deeper to find out what kind of battery life you can really expect from your laptop. We test like no one else, so check our full laptop reviews for the Which? verdict on laptop battery life.