Binary options are one of the fastest growing financial products in the world, but in most cases they’re quite simply a fraud. UK investors have reported losses of more than £50m to binary options scammers, according to the police, including £18m in the first half of 2017 alone.

The true number could be far higher – dozens of Which? members have been targeted, and the Which? Money Helpline is currently getting up to 15 calls a month from victims.

Losses are typically a few thousand pounds but, in the worst cases, we’ve spoken to victims who have lost hundreds of thousands.

Since binary options first appeared a decade ago, the industry has grown to hundreds of companies, duping victims out of billions of pounds a year globally.

And a new Which? Money investigation has exposed the unfair contracts used by dodgy firms, including clauses that let brokers rig the market against you, or treat your money as their own.

We found salespeople willing to say anything to get us to invest, and uncovered smokescreen tactics that make it hard for potential victims to see who they’re dealing with – or who they can really trust.

How the scam works

On the face of it, binary options are a potentially lucrative but ultra-high-risk way to make money by speculating on short-term market movements.

When you trade binary options, you’re placing a bet on whether the price of a share, stock market or other asset will be above or below a set price in future.

They’re ‘binary’ because every bet has only two possible outcomes: get it right and you’ll win your stake back, plus profits of 50% to 90%. If you’re wrong, you’ll lose the lot.

Mike Tomlinson works for the Which? Money Helpline, which has fielded dozens of calls on binary options this year. He explains how the scam works.

There are some legitimate companies selling binary options, but even the genuine products should be considered gambling, not investments.

But most binary options brokers aren’t really brokers at all. When you trade with a real broker, your buy trade will effectively be paired against another trader who wants to sell, or vice versa, and you’ll be charged a modest fee for the service. If you win, you’ll trade more, and the broker will earn more commissions.

Instead, binary options companies work more like bookmakers. Customers bet directly against the house. Your losses are their gains, and vice versa. They might let you win in the early stages, but only to encourage you to bet more. They know it’s the house that will win in the end. 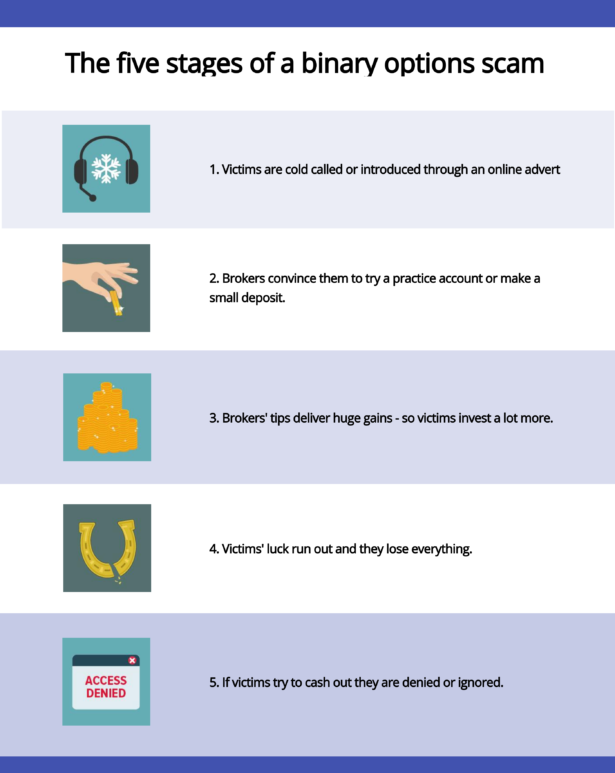 If companies were upfront about the way they worked, that wouldn’t necessarily be a problem. but often they aren’t.

We spoke to one investor, who we’ll call James (he asked us not to use his real name). He had invested £60,000 with Magnum Options, making dozens of five-figure bets, each lasting a few seconds.

James must have been betting against the house – and the betting pattern suggests the game was rigged. The tips from James’s broker were lucrative at first, but when he tried to cash out he was denied and the quality of his tips slumped. He decided to bet against his broker’s recommendations – and his account balance kept rising.

Magnum Options has since been shut down by the Insolvency Service, and we had no response when trying to contact its representatives. The pattern of dubious trading data isn’t limited to this company – or the instruments that James speculated on.

A former employee of one site told us crooked sites ‘adjust the risk’ on traders’ accounts – adjusting the settings so someone is more likely to win or lose. It’s not possible to adjust the risk of the stock market.

To put it bluntly: traders are told they’re betting on an asset price, but in some cases, it appears to be more like random fluctuations that are controlled by the broker that wins when you lose.

James isn’t the only person to be burned by a binary options scam. Our chart shows just how much has been lost to this emerging fraud over the past five years.

If you’re not reading this on which.co.uk, click here to see how UK binary option scams have been rising.

Dodgy market data is the clearest evidence of fraud we found, but it’s not all.

One site we registered with, 24option.com, is supposedly regulated in Cyprus. During the registration process we were asked to confirm we were ‘sophisticated investors’ – a technical term that basically means we know what we’re doing and waive our rights to regulatory protections.

One of its representatives called us during the registration process, telling us to sign the declaration, even though we told them we had no experience. The implications of doing so weren’t explained to us – and any regulated financial company found doing this in the UK could face severe repercussions.

With another site, 72option.com, a friendly broker, supposedly called David, offered to show us the ropes. He said that if we deposited £250 immediately, he’d match our initial deposit. He didn’t mention the small print that meant we wouldn’t be able to withdraw a penny until we’d gambled £12,500.

David pushed us to invest immediately, even though we said we had no knowledge of the market and wanted to research first. He said it was imperative we deposited immediately so we could capitalise on ‘the buzz’ from the new Apple phone launch, which had happened a week earlier.

This was absolute rubbish – if the new Apple phone created trading opportunities they would last seconds, not weeks. David tried to tell us deposit, rather than trade if we were nervous, and wasn’t willing to offer us access to a ‘free training video’ until we’d handed over our money.

We were concerned by the terms and conditions imposed by all of the binary options sites we looked at. Many had initial bonuses, like 72option.com, which required investors to gamble huge amounts before they had a chance of seeing their money back.

Others had clauses that meant customers could only withdraw profits, rather than their initial stake. Some charge fees for withdrawals, or limit withdrawals to levels well below the minimum deposit. If you don’t trade for a month or two, many start charging inactivity fees.

Some had clauses that meant the money in our account was technically owned by the site – and they were allowed to use it for their day-today-day business operations.

24option.com and 72option.com have not responded to our questions.

How the binary options scam spreads

The explosion in binary options brokers is largely down to a franchise model. Hundreds of brands exist, and and there’s a huge industry promoting them.

Ads for jobs for brokers, or to write fake reviews are easily found, as are commissions for people who refer new customers. UpWork, which hosted some of the adverts we found to write fake reviews, told us that they ‘take action to suspend any clients or freelancers who do not comply with our terms of use’.

These fake reviews – along with heavily influenced search results, make it hard for people to work out when a binary broker is genuine. Reviews can’t be trusted, and search results are clogged with unfamiliar companies and ads from dodgy sites.

For mobile traders, there are still plenty of these questionable apps in the Android and Apple stores.

Google wouldn’t confirm that binary options broking is against its policy, although it did tell us how to report fraudulent apps (this can be done on the app’s page in the store) and we understand it is considering banning binary options outright. Apple didn’t respond to our questions.

The Financial Conduct Authority (FCA), Gambling Commission and City of London Police have all warned fraud is rife in the industry, but awareness among potential victims is still relatively low.

Binary options aren’t currently regulated as financial products in the UK, but this will change in January 2018 when the FCA takes control of the industry.

Consumers will be able to take complaints to the Financial Ombudsman Service, but only if the company was regulated when they dealt with them. This won’t help people who’ve already fallen victim to crooked companies, however, or those who get hit by businesses that aren’t regulated.

What you can do if you’ve been scammed

Reported UK cases are now in the thousands, but many more have yet to be unearthed. Report cases to Action Fraud, the police’s financial fraud team, as well as the FCA.

The more victims share information with the authorities, the more they will be able to do to warn others and catch the crooks. Some victims feel embarrassed, but they shouldn’t. Con artists use every trick in the book to win your trust.

The chances of recovering your losses are slim – but it’s worth trying. If the company is outside the UK it’s hard to take legal action, as it won’t be accountable to the UK authorities.

If you deposited with a credit card you may be able to make a section 75 claim – usually on grounds of fraud by misrepresentation. This won’t always work, as credit card companies sometimes treat deposits as cash withdrawals, which aren’t protected like purchases.

You can also make a chargeback request if you used a debit card, or contact your bank to block or reverse a wire transfer. Unfortunately, these often won’t work – and are at the bank’s discretion.