At Which?, we’re often approached for advice about bizarre, comical and sometimes downright dubious investment schemes promoted to members of the public.

Our Money Helpline fields more than a thousand calls each year from people concerned about their investment options, while our team of investigative journalists discovers the truth behind the extravagant claims made about some rather exotic – and unregulated – products.

And while previous years have brought us such eyebrow-raising enterprises as rice paddies in Kent, Rolf Harris paintings and oddly-located forests, 2017 has been no exception. We’ve seen a bumper crop of investments that are more than a walk on the wild side.

So without further ado, here are the six weirdest investments we’ve encountered this year.

Burial plots aren’t usually associated with worldly wealth. However, this spooky form of speculation is promoted by firms who claim the UK’s ageing population is driving demand for graves. In November’s Which? Money we revealed the case of  63-year-old David Williams from the West Midlands, who invested nearly £5,000 in new burial plots in Surrey in 2014 and has yet to receive a return as they remain unsold.

Parking spaces – particularly those at airports – are being aggressively marketed to investors, with one brochure we’ve seen claiming that Glasgow Airport ‘will require 18,000 [long-stay] spaces by 2020.’ Marketing material like this sounds very authoritative, and tries to appeal to our common sense.

But in truth, there are no guarantees that demand will go up as claimed. Holidaymakers could increasingly opt for public transport, taxis, staycations or alternative airports.

2017 is the year cryptocurrency entered the mainstream.

And although Bitcoin is the word on everyone’s lips, for a brief period in October a new contender – called Electroneum – was brought crashing into public consciousness by none other than Harry Redknapp. The former football manager, not known for his technological prowess, faced ridicule after he tweeted: 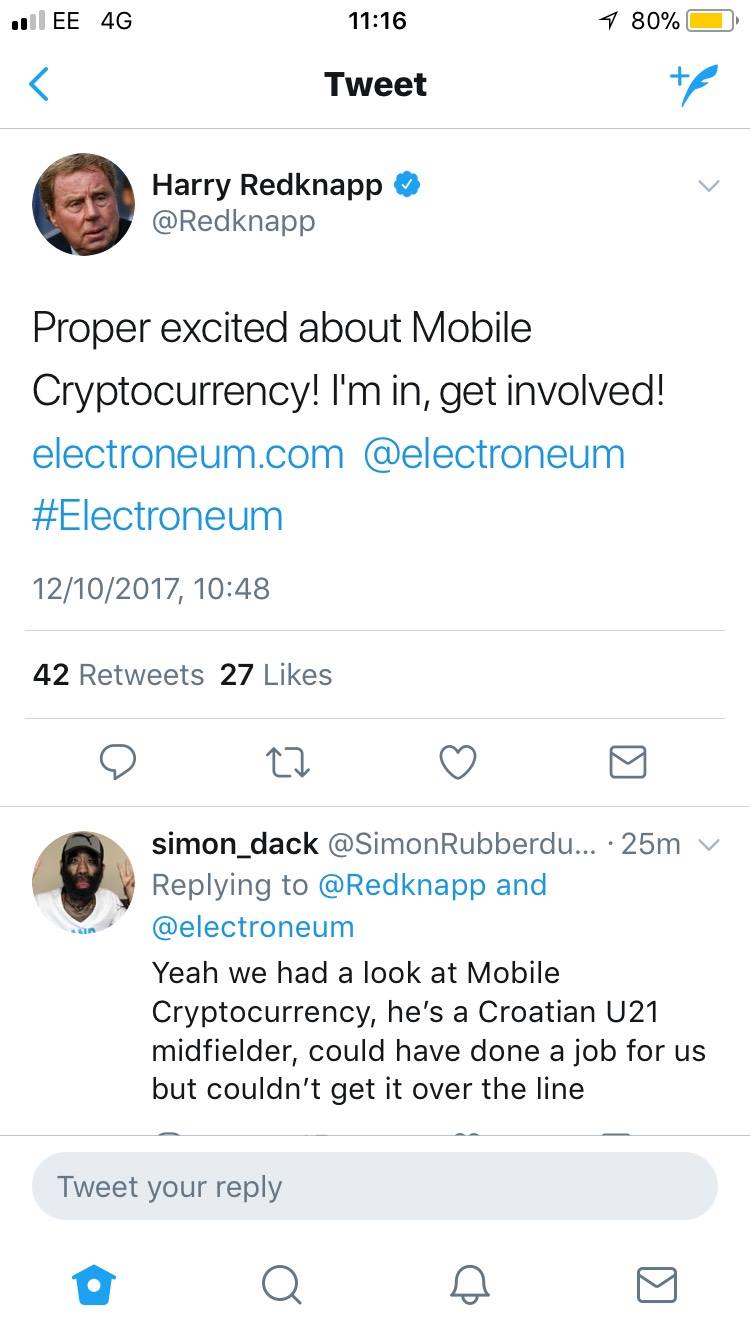 The tweet was later quietly deleted. However Electroneum continued to grab headlines after it was hit by a cyberattack in November, underlining the hacking threat to cryptocurrencies generally.

This year Which? Money has reported several investors’ problems with unregulated scheme Store First. The company rents out storage pods to businesses, home movers and anyone needing a little extra space – but it also markets ownership of the pods to investors.

The government has now petitioned for the firm to be wound up. In May, the Serious Fraud Office launched an investigation into two other businesses – Capita Oak Pension and Henley Retirement Benefit – in connection with self storage investments.

These all-or-nothing ‘options’ are really just a high-risk gamble on which way financial markets will go. While not all trading platforms are fraudulent, they are highly prone to fraud. This year our Money Helpline has been inundated with calls from people who’ve ‘won’ such trades – only to find they cannot access their winnings.

In other cases the trading platform is rigged so that you’re more likely to win or lose. In November we revealed the distressing story of ‘James’ (not his real name), who lost £60,000 in a matter of minutes.

This East Asian legume isn’t just the foundation of several national cuisines – it’s now a futures and commodities opportunity, according to Zurich Private Capital. The firm’s website boasts of ‘an indulgent market where demand outweighs supply’ and urges: ‘Once you embrace the idea, you’ll soon realize a better return on your investment.’

One puzzled potential customer contacted our Money Helpline, which advised that the firm is unregulated.

The problem with schemes like the ones above are that they’re not regulated by the Financial Conduct Authority. That means they can get away with language that regulated firms can’t and sometimes this means companies downplay risks in their sales pitches.

When a firm’s activities aren’t regulated, it also means you have little recourse if something goes wrong. You can’t complain to the Financial Ombudsman Service about the firm, and you’ll have no right to claim a refund from the Financial Services Compensation Scheme if it goes bust, or turns out to be a scam.

Some of the more exotic schemes are legitimate ventures, though they may still be unwise investments. The trouble is, it can be very hard for a novice investor to tell the good from the bad – and even the experts sometimes struggle.

As a general rule, here are some things to be wary of:

For more advice on how to spot a con, see our scam-busting guide. If you think you’ve been scammed, contact Action Fraud and your bank immediately.