Frausters are telling people they’re facing legal action because they owe money to the government in the latest wave of HM Revenue and Customs (HMRC) scams.

In some cases reported to Which?, the scammer had told the person, either by phone or email, that they owe money to the government and threatened them with legal action if they didn’t pay.

And some people have also told us they have been sent scam emails telling them they’re owed a tax refund from HMRC, but the email address seemed very suspicious.

The HMRC issued a warning about tax scams at the start of the year, but it appears fraudulent contact is still plaguing UK taxpayers.

Read more: eight scams to watch out for in 2018

In January, the department said fraudsters were texting people with false claims, such as that they were owed a refund.

HMRC said: ‘Messages will usually include links to websites that harvest personal information or spread malware. This can in turn lead to identity fraud and the theft of people’s personal savings.’

Then, in March, it was reported that people were getting phone calls out of the blue threatening legal action.

The HMRC also has a warning on its website about email phishing scams, social media scams and images of some examples of each of the scams. 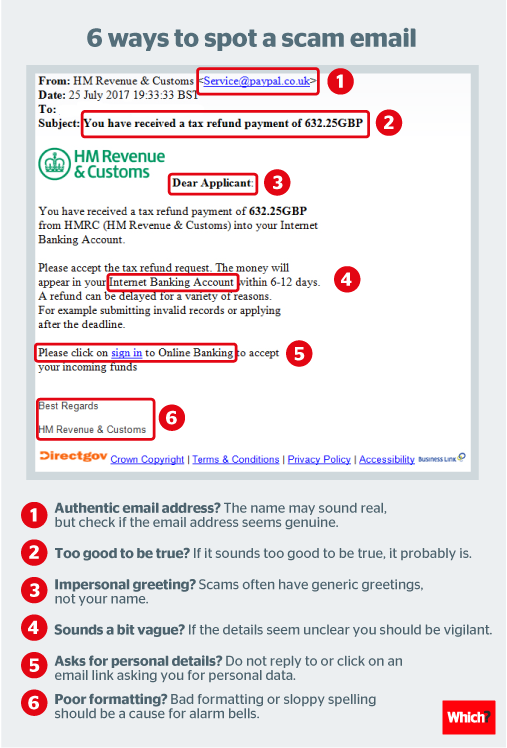 Join the conversation: We busted another council tax refund scam

In the year to January 2018, HMRC had made a start on removing as many as 16,000 malicious websites, meaning even if the texts are delivered, the associated phishing website is likely to have been removed. 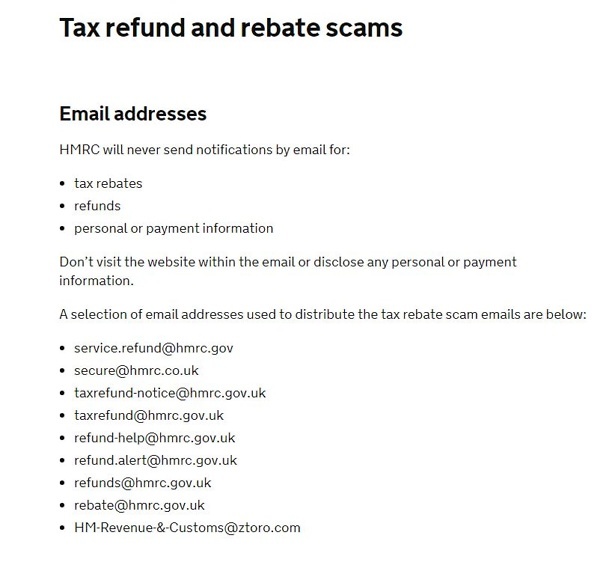 What to do if you get contacted by an HMRC scam

If you’re contacted out of the blue by someone you don’t know and you can’t verify who they are, hang up or delete the correspondence.

Do not hand over any of your personal information or contact details.

Instead, contact HMRC directly to check whether the email is genuine.

HMRC is asking anyone who is sent a bogus HMRC text or email to report it , so it can investigate.

Even if you get the same or similar phishing email or text message on multiple occasions, please forward it to email phishing@hmrc.gsi.gov.uk and then delete it.

Keep an eye out for tax scams

In the time around the tax deadline, tax phishing scams become increasingly common, so stay vigilant.

Emails of this sort not only look official, but can often look like they’ve been sent from official government email addresses, making them harder to spot.

The HMRC will never ask for your bank account details or personal information via email.

We have free information about how to identify tax scams and what to do if you’ve been scammed.

Spot a scam a mile away

As fraudsters get savvier, scams are getting harder to identify, so we’ve also written up seven top ways to help you spot a scam.

We can also help you report a scam and have free resources and guides to help keep you scam savvy or get your money back if you have been scammed.

Even if what happened to you wasn’t a scam under the Fraud Act, but you’ve been ripped off, you still have rights under the Consumer Rights Act.

Fraud is now at record levels, with more than 5m scams costing Britons a mind-boggling £9bn each year.

And while there are sensible steps we can all take to protect ourselves, an unfair burden has been placed on the public. We’re calling on the government, regulators and businesses to do more to safeguard us all from scams.

Call on the government to safeguard us from scams and sign the petition.